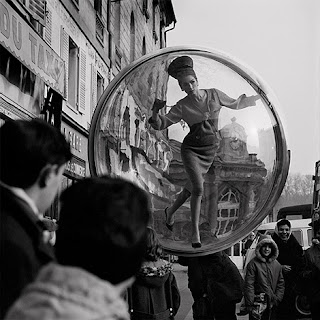 Saying that the Autumn 2011 season on the gallery scene is the hottest in years would be an outrageous understatement. There’s something for everybody: “Pacific Standard Time”, the most sprawling retrospective of Modern Art In Los Angeles, dozens of photography shows featuring the most outrageous American shutterbugs, and even some wild lowbrow favorites. If it wasn’t happening at the movies or in the nightclubs it was definitely popping in the galleries!

Late October set the stage for the opening of the Ellen Von Unwerth show at the Fahey/Klein Gallery on trendy La Brea Avenue. Her new show coincided with the release of her new Taschen book, “Fraulein” ($500 – cheap?). The pieces featured were black and white - no color shots this time, and looked like some kind of Louise Brooks porn shoot complete with “Story of O” masks, making the models look like off-duty steampunk superheroines getting into sexual mischief. In the smaller room was the incredibly awesome fashion surrealism of Melvin Skolsky, showcasing his “Paris 1963” work. Skolsky is the photog who shot those insane “Model In A Bubble” in the streets of Paris series. The limited edition book was on sale there, also. One of the best Fahey/Klein shows I’ve been to. 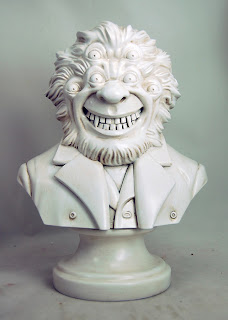 Mid-November got even crazier starting with Travis Louie’s “Curious Pets” show at the Merry Karnowsky Gallery. The pieces were black and gray acrylic portraits with static white backgrounds fabricating the illusion of old turn of the century engraved photographs, but naturally with a wicked twist. Pieces included “Martin and His Bat”, a young man with a vampire bat sitting on top of his head. Then there’s “Agatha and Her Beetle”, a frail, anemic lass with a big, gnarly beetle resting in her wiry hair. Each piece was accompanied with a short fable telling a tale of these folks and their strange pets.

Pictured above is "Uncle Six Eyes", a great resin bust created in two versions: a white version and a black version. It's a great parody of the Ludwig Van Beethoven bust that was de rigeur in every home during the 1950s and 1960s. Overall the style of the pieces in the show was like an ungodly union between Mark Ryden and Basil Wolverton. By the way, a quick scan of the upcoming show schedule at Karnowsky’s gallery shows every indication that she will be the mid-city lowbrow capitol of Los Angeles. Getting back to photography I saw the Hedi Slimane show, “California Song” at the Museum of Contemporary Art (MOCA) at the Pacific Design Center. Slimane’s right up there with Von Unwerth, Richardson and LaChapelle in the new breed of crazy fashion shooters that’s burning up the editorial fashion magazines internationally. The show appealed to my deadpan sense of humor: on the ground floor his photographs (all black & white) were on display, all unlabelled and mounted on drab wooden crates, as one-dimensional as you can possibly get. 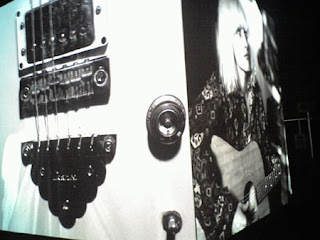 Upstairs was another matter entirely: slides of the very same shots and more were projected on a three-sided wall over 10 feet tall, creating a much more satisfying and, dare I say it, moving experience. It sort of makes you question the whole gallery system in one fell swoop. There were enough showbiz photos to keep you happy (John Lydon smoking, a rotting Brian Wilson, and LOTS of Michael Pitt, maybe too much), but the best shots of all, ironically, were his surfing photos.

That’s ultimately a true testament to the brilliance of Slimane’s artistic eye. Taking exciting surfing pictures makes you a good photographer, but shooting awesome ones in BLACK & WHITE makes you a GENIUS.
Posted by Andy 7 at 5:00 AM

Very strange, so many black and white shows, is this the new thing?