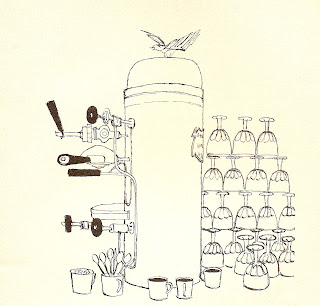 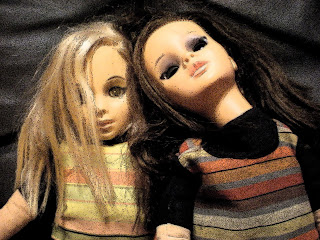 1954, Greenwich Village:
Millie and Ellie, The Skooby Dooby Sisters were hanging out at their wickedest coffee emporium, The Pony Espresso, playing chess very intently.
Millie lifted her head and peered through her ratted out brunette locks and mumbled, “Like can you imagine tape recording The Steve Allen Show off the boob tube and you could like play it over and over again?”
“Man, you’re getting too abstract for me. That’s almost as crazy as cats typing out messages to each other on a telephone they carry around in their back pocket!” Ellie coolly sniffed.
“A telephone – in your back pocket? Chick, you’re on a wilder rocket ship than me. But dig this, imagine typing your poetry on a typewriter and seeing it on a way-out TV set and cats from all over the world can read your crazy scrambles?”
“Yeah, dig, and they can print it on a tiny printing press next to the typewriter.”
“Man, are you crazy chicks drinking your tea or smoking it?”
“Scruffy!” they said in unison.

A quick word about Scruffy: His real name was Sterling Holloway Scarborough IV, and received an even larger trust fund than both transistor sisters combined, a secret he kept hidden better than they because boys keep secrets better than girls. Scruffy always managed to maintain his cool with only one exception, and that was when people assumed he was from the New Haven Scarboroughs who worked the galley on the Mayflower, which he wasn't. He was of the Newport Scarboroughs, who actually helmed the Mayflower. Such class distinctions were not to be bandied about. It was rumored he was the more affluent nephew of writer William S. Burroughs. 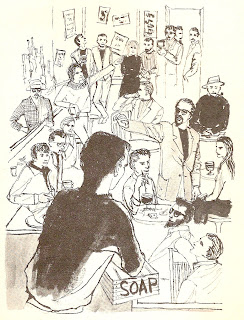 “Chicks, you better like cool on the smoke signals”, he growled with his piercing blue eyes blasting through his ruggedly good counter-culture looks. The sisters both stared at him with hipster love. “Hey! Dig the square tourists!” Scruffy grinned. “The golden-agers coming in at 2 on the clock!”
A very harried, well-dressed elderly couple raced up to the Skooby Doobies, and stared at them incredulously.
The elderly woman clutched her handbag and gasped in horror. “Oh! There you are, we searched high and low for you girls! Glenn, will you look at them?”
“Yes dear, I’m looking at them”, a dapper old man in a topcoat complied.
“You girls look like a pack of gypsies.”
“Yeah, well”, Millie’s left leg and right eye twitched nervously. “That’s like, your opinion, man”.
“Man? Man?? Did a sick raccoon apply your make-up? Didn’t you learn anything in finishing school?”
“Muth-errrrr…”
"You wanna, like, transpose that in a major key?"
“Look at your father. You’re breaking his heart! Do you enjoy breaking your father’s heart?”
“Well, actually dear, they're not as bad as those hooligan doctors trying to ruin my business by that dreadful report they released yesterday. Imagine, cigarettes killing people! Did you ever hear such trash!”
“That’s alright dear, we’ll be summering in the Hamptons with the Kefauvers. We’ll get old Estes to break up that gang.”
“Blast that Estes, I’ll call old Tailgunner Joe McCarthy on them, my old Air Force chum. He’ll sort those scoundrel butchers and run them back to medical school. Cancer, of all the confounding crazy ideas.”

Mother Huntington said, “You can’t believe the filthy hovels we trudged through to find you girls. First we went to the Two Much!”
“Went there yesterday”.
“And then we went to The Screaming Bean.”
“Screaming Bean? Made the scene at The Bean last night, Mama Rebop”.
“After that ordeal, we went to that flea pit The Psychiatrist’s Kouch, and promptly walked out.”
“The Psychiatrists’ Kouch? Man, that pad’s for squares.”
“Well, I’m glad to hear that, children. So then we went to The Eye Ball 8 Ball”.
“Did we go to the Ball this morning?” Ellie asked Millie.
Millie’s eye twitched nervously. “Aw, lemme concert trate…was it on Bleecker and Houston?”
“No, doll, that’s The Neurotics Club”.
“McDougal and Central?”
“Nix, baby, that’s The Stone Cold Dragg. That’s for square Jane tourists.”
“We ever make the scene at Magick Carpet Ryde?”
“Yeah, but they like, 86’ed us from there, remember?”
“No. We must have boppin’ around The Eye Ball 8 Ball, then.”
“Crazy!”
“You girls are crazy, and we’re going home. Right now!” Mother Huntington ordered.
“What are you doing, Eleanor? Why are you stroking your hand?”
Ellie’s eyes glazed. “Dig, I’m not stroking, I’m petting Katmandu. You’re giving her middle class persecution complexes.”
“What is she talking about, Glenn?”
“Dear, this opium den smells just like that Hindu costume party the Van Gelders threw at their estate at the Breakers after their hostile takeover of the First National–“
“Dig, Mommy-O, Katmandu is like our invisible cat, you copy, jane?”
“Why of all the nerve, talking to your mother in such a fashion. Young lady, just remember one thing: I brought you into this world and I can take you out of it!”
Millie and Ellie’s eyes widened and looking at each other, cooed, “Craaazzzzy”.

Scruffy elbowed the the girls’ parents gently further and further out of the club and into the rainy street. Millie turned to Ellie and looked upset. “Hey!”
“It’s my turn to pet the cat. Hand her over, chicky baby!”
Ellie lifted her arms and dropped the invisible pet to her sister. Millie smiled. “Katmandu, you dig us. You’re no square poppa”. 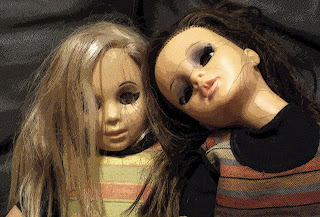 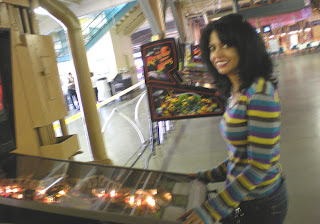 It was a damp, gloomy September weekend when Hollywood Park, the racetrack of legend, hosted the Celebrity Pinball Tournament, playoffs between pinball champions of all ages and both genders. I’ve always been more of a pinball wizard than a video game gremlin so I was pretty damn pumped about going.

The cover charge was $25 and in return you could play non-stop for hours on any of the fifty pinball machines. The cover charge went to a good cause, a charity for autistic children, which reminded me of the Who’s “Pinball Wizard” song from “Tommy”. Since there were no horse races scheduled we pinball geeks had the place to ourselves. It was awesome!

My favorite machines were Monster Bash, which had animated toy monsters crawling all over the inside of the board. The flippers were purple and I wish I had this board in my living room glowing against our black light. I also enjoyed Earthquake, a pretty cool board that literally shook with the sensation of an earthquake every time you hit the Bonus Score! Another great board was Circus Voltaire where you had to hit the Ringmaster’s annoying green face. He looked like The Joker from Batman and the artwork to the board was great. The lights and inner design were fantastic to look at. If I owned these machines I would probably get real stoned and just stare at them for hours! 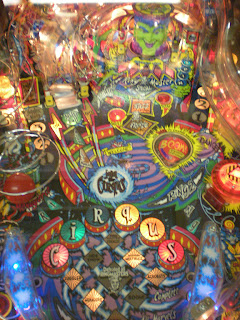 Boards I didn’t like were the movie based ones, like the James Bond 007 Goldeneye machine, slow and dull, the Pirates of the Carribean and the Shrek machines. They were nothing real special – I don’t think the hardcore pinball fans were too much in love with them, either. They didn’t get much play that I noticed.

The granddaddy machines from the Fifties and Sixties were well represented, including one called “Chinatown” that had a disclaimer stating “Not Intended for Children”. Haw! Most of the old boards were creaky, slow and even magnetized, i.e. the ball would automatically fall down the center so neither flipper could smack it. There was a cool looking board based on The Beatles cartoon show, but as kinky as it looked it was a lousy game. After two rounds I walked away looking for better thrills. So did everybody else!

I missed the actual tournament but the trophies looked amazing, a huge silver pinball on a beautiful chrome base. I wouldn’t mind winning one of those fuckers.

When I asked who the celebrities for the event were, I was told it consisted of a writer from “The Family Guy” and a female CGI artist who’s “tops in the CGI field”. Holy shit! Celebrities! I told Rebecca, “Well, you were in Frightwig and on the Gene Simmons reality show and I’ve been in the movies and an ex-underground rock star. As far as I’m concerned we’re the celebrities!” And they treated us as such, too. A photographer was snapping away at us flipping pinballs, rocking boards and tilting like maniacs.

They finally closed down the All-You-Can-Play pinball smorgasbord and gently kicked us out, and not a minute too soon. After four hours of non-stop pinball intensity my right hand screamed in numbing pain that can only be described as classic Carpal Tunnel Syndrome at its worst. Ouch!

As we walked across the parking lot airplanes were banking down over our heads (LAX being 3 blocks away) and Rebecca took pictures on her cell phone. Rather than get on the gray ugly freeway home we decided to drive through funky Inglewood taking La Brea Boulevard all the way home. Yeah, we took the scenic route listening to Minor Threat, driving through the black ‘hood to the sounds of “Guilty Of Being White”. Game over. 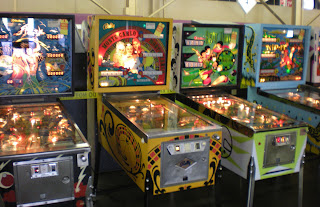 The End Of A Non-Existent Era 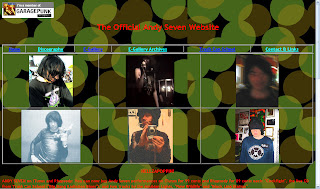 It’s with sadness and no regrets that I’m here to announce the closing of my website andyseven.com, a website that I used for posting music and art event updates. I even tried to redesign the site but it never really shaped up into something I could get excited about!
I’m closing my site because I haven’t performed in years and have no plans to do so, and I also don’t produce a great deal of art in spite of the fact that the e-Gallery was the most popular page on my site. The least popular page was the Trash Can School gallery; no surprise in that my Trash Can School videos are the least viewed ones in my You Tube account. More time and energy has been spent on keeping up a weekly blog, book reviews for GoodReads and posting my artwork and photos on Flick*r.
Before I go, I just want to add that I'm keeping the domain address "andy seven.com", so the rock singer from Germany named Andy Seven can go eat shit and the British artist named Andy Seven can go eat shit, too. Do a Google search before you boost somebody's name, assholes.
Well, anyway, say a little prayer for the fabulous website that once was, and if you’re a true hardcore fan of my ravings there are several links to the right that’ll send you to more trash in a flash. Here, for the last time, are some images from the great website that once was. 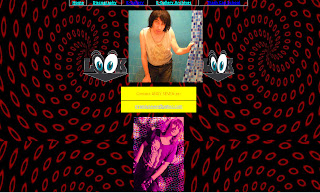 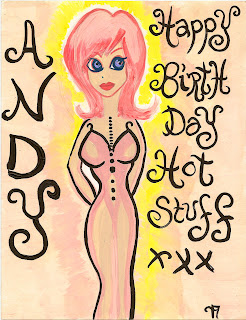 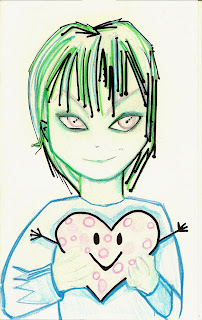 One of the things that I always look forward to whether it's Birthday time, Christmas time, or Anniversary time is getting cards drawn by Rebecca. As you can see pictured here her imagination runs rampant and she'll draw all sorts of wild stuff. Rebecca never fails to entertain me because getting her cards is just as exciting as getting the presents themselves! 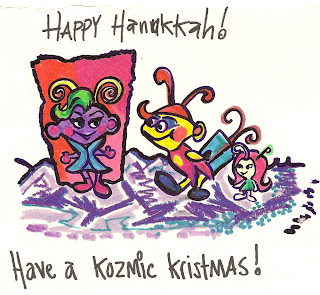 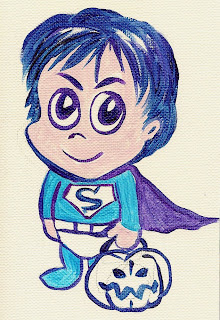