Some of the best videos on YouTube are the fifty second Go Sees shot at various modeling agencies and posted online. I find them fascinating because they show models in unguarded and unadorned ways that tell you a lot about the way they work.

I’ll start by presenting you with one of my favorites, Ranya Mordanova*, registered with The Ford Modeling Agency. The Go See video format begins with a verbal introduction, followed by a walk and then a quick profile. The video takes all of forty-five seconds. Ranya has a good, classic runway walk, stands well, and ends with a classic profile.

Paul Boche** is seen here at a Go See at MTC (Maurilio Carnino Casting). A “Go See” for those who don’t know is a sort of audition for modeling work in editorial, runway or other various commercial projects. Even if a model is hot or famous they still do them just to touch base with the agency.

In this video Boche looks a little nervous but still shows dynamic presence in front of the camera. His height is so imposing that walking through the narrow hallway is a little touchy. Cool video.

Misha is from Russia, in case her heavy accent doesn’t already give it away, and registered with The Ford Agency, too. She has a very good walk and manages to keep a good poker face in spite of the models in the background laughing while she’s breaking into her model stance. Her stance, by the way, is very good.

Francisco Lachowski from Brazil is a pretty dynamic print model, one of my favorites, in fact, but here his walk looks very underwhelming, not his strong suit. In fact, Robert Mitchum going fishing looks more dynamic than this walk. It’s pretty weird to see where some models' strengths lie. Some are better before a camera and others are better live on the runway. I always assumed they were great at everything.

Stephanie Rad from England is the exact opposite. Although I find her facial expressions in editorial print to be somewhat lifeless and even frigid, here she comes off as animated and pretty happy. She also walks in the classic model style, one leg crossing over another, and then breaks into the most badass pose, her legs spread out defiantly. And that's how you sell fashion designs!

It was just about a year ago today that I blasted out of my nightmare job at the LA County Board of Supervisors and contemplated on my future. After clerking for the County since 1991 and feeling burnout setting in I needed a change of scene. You couldn’t have picked a more radical change of scene than working in wardrobe for the upcoming Sony Playstation 3 game, “Twisted Metal”.

Knowing virtually nothing about the story of “Twisted Metal”, what little I gathered from it, was that it takes place in suburban Anytown USA, where people are granted any wish from someone named Calypso, a sort of anti-Wizard of Oz. An evangelist named Preacher advises everyone to resist Calypso, but like any good conscience gets tossed aside.

One of the main characters is an ice cream man gone psycho killer named Sweet Tooth, a killer clown with a WWF type persona. A scarred model equally gone batshit named Dollface launches a vendetta towards supermodels on the runway. She looks a lot like Bruce Timm’s Calendar Girl from the Animated Batman Series, but I digress. Because this is a game in the driving genre (a la Grand Theft Auto) there are road rage rivals for Sweet Tooth, like The Dead Riders and the black Evel Kneivel father and son team, Grimm and Grimm Jr. Where a lot of this goes, I don’t know, because I don’t own the game or belong to the TM cult (this is the third version of the game). All I know is that the film we worked on turned out beautifully.

Rebecca was hired to work on “Twisted Metal” because she had a long resume of having created costumes for a wide variety of games, including “Infamous 2”, “Batman: Arkham Asylum”, “Saints Row”, “Gotham City Impostors”, and many more.

“Twisted Metal” was filmed at the Sony games sound stage in a suburb near San Diego in the middle of an industrial park (natch). Rebecca fabriced costumes and fitted the actors while I assisted her and grabbed clothes that were needed ASAP. I also had fun distressing ice cream vendor uniforms, mental institution inmate gowns and other uniforms, ironic given I had just shitcanned the most institutionalized government job in the world.

The footage was shot in front of a green screen, like in movies like “Sin City” where backgrounds are computer generated. Some of the costumes we fabricated:

Grimm – Another evil onesie, this time with the Evel Kenivel drag look, but ghastly and ghoulish looking.

The Supermodel – beautiful red draped dress that had to be form fitting for the model that didn’t get cast until the day before shooting. (Yeah, it was a lot like that).

And as I said, for someone who just blew out his government job out his ass I had to distress a lot of uniforms: Doctor, Nurse, Policeman, Security Guard, Asylum Inmates, etc. I must have been the envy of every fetishist in the world! Makeup shared the same tent as we did so we were amused at Sweet Tooth getting fake scars applied to his body, because he had enough real ones to begin with. Paul was a great guy and had a million war stories for every scar he had.

One scene shot showed young asylum inmates cursing Calypso for driving them mad by granting their wish in exchange for their sanity. Every shot had to feature them wearing dirty, stained pajamas and wearing a strait jacket. We could only afford one strait jacket, and it had to look like it had vomit, spit and piss all over it. This required a few cans of creamy soup – Cream of Potato, Cream Corn Chowder, Cape Cod Clam Delite, etc. We debated on which was worse: the look or the smell of the fucking thing.

The asylum inmates were kids who worked in the Quality Control section at Playstation, so the opportunity to be in a game was thrilling to them. It was my job to dress them and for a brief moment I felt like somebody’s Dad. “Don’t forget your wallet”, “How old are you?”, “You have to take your nose ring out!” After the mind fuck of the government, I was going through a whole ‘nother mindfuck.

Just because it was a video doesn’t mean that the egos on set were any different than they would on any TV or movie shoot. There were attitudes, but mostly from the lackeys in the crew. The actors were easy to get along with except for one minor character who had problems understanding the meaning of the word “retake”. I guess he wasn’t used to using a shovel digging graves. He should intern for a month at Forest Lawn Mortuary.

Multitasking brought on a new meaning when Rebecca was called on to play stand-in for Dollface. When she played Dollface she wore the skin-tight outfit for long shots. The crew really woke up when they saw her – they’re probably still looking at the pictures they shot of her. She also played a Dead Rider in the video. 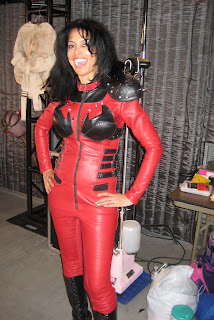 The shoot took about four to six weeks, and if memory serves most of the days were cold and drizzly. The sound stage wasn’t heated at all so our tent was very dark and damp. I could relate to the Crazy Calypso Kids based on our surroundings, so it didn’t take a lot to convince me to run out to the mall 25 miles away to grab stuff from Victoria’s Secret or Neiman Marcus. By the time the shoot was over and done I was ready to get back in bed with some grain alcohol, feeling more than a little bit like Sweet Tooth after scooping too many spumoni-on-pistachio waffle cones.

Fast-forward to the following year and “Twisted Metal” is finally out and it looks amazing, fun to play and cinematic as well. I don’t own any video games and don’t profess to being an expert on them but this is definitely one wild, cool, sickening joystick pounder. And I even got a credit on it. How wild, cool and sickening is that???

Get Twisted Metal here and drive yourself crazy!
Posted by Andy 7 at 5:00 AM 1 comment: