How I Learned to Stop Worrying (And Love Industrial Dance) 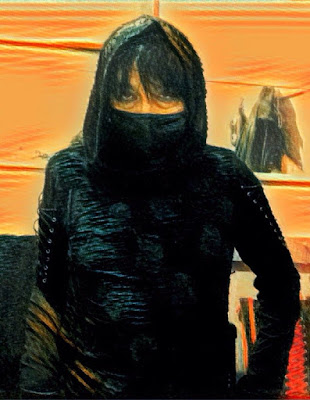 Sometimes when you're sad you drown out your problems in booze, sometimes in food, drugs, sex, and sometime you drown out your problems in music. Getting over my broken marriage, I gorged on listening and watching music videos on You Tube. On that particular evening I chose a bunch of electro swing videos, not just the music but watching some insane guys dancing to these tunes.

My favorite dancer was a guy from Canada called Take Some Crime, whose dancing to swing was part jazz dancing, part hip hop, some amazing mime as well as many new things he probably invented himself. There was another wild dancer called The Boogie Man (channel - Sly Mogul) who was also a lot of fun to watch.

Watching these guys dancing and feeling free with their bodies brought an indescribable happiness that's hard to describe, but bargain, the code word was FREEDOM. They looked so free in their movements and unhampered by whatever shit was floating through their lives. Their terpsichorean hijinx felt positively liberating. I instantly responded to them.

So while I'm window shopping all these dance marvels on video, You Tube in their obtrusive matchmaking style ("Other videos you might enjoy") offered several thumbnails of beautiful girls in fake multicolored dreads and leather face masks dancing. I couldn't resist.

What I saw were videos of industrial dance from every part of the world, from Argentina, Germany, Spain, Poland, and even Egypt. Every girl had her own style while still falling under the general template of industrial dance. The number of girls outnumbered the guys, whom I didn't think danced as well as the girls.

At any rate, most of the dancers dressed in cybergoth finery, some of which consisted of the aforementioned dreads, face masks, large creeper boots and tons of punk bracelets. There was even an instructional video on how to dance by Brioni Faith, who explains the dance moves in such a way that every movement falls in for a reason.

My two favorite dancers are Sayomi from Poland and Wendy Ailan from Argentina. The other ones are great, too, but these two have the most dynamic dance videos of the bunch. Sayomi seems to have a preference for shooting her videos at Comic Cons and cosplay fests. There's also a video at a shopping center and one at an aquarium. A real exhibitionist.

Wendy Ailan's videos largely take place in stark urban landscapes which give her videos a gritty, urban feel I like a lot. There's also a group of dancers called Das Klub who are fun to watch, too. What a great antidote to all those vile Dancing With The Stars shows crapping up television.

After watching these great dancers at work something very funny came over me. I WANTED TO DANCE, TOO. I began attending very dark goth dances (the darker the better) and began moving much like my new video heroines. I had nothing to be afraid of because every dancer was in their own world and didn't seem to care about what I was doing. That was great.

With every dance I got bolder and stronger in my dancing and even tried all kinds of new moves. I had several moves I used when I swam and incorporated them into my dance regimen, which blended beautifully. I even began buying leather face masks (I draw the line at those neon dreads, though. Not my style.). At this point in time I can go into any club and now dance without feeling nervous, which brings me to my next topic.

THINGS THAT BOTHER ME ON DANCE FLOORS

1. Some guys are really self-conscious about dancing, so they dance comically like the whole thing's a joke. It's not. Stay off the floor if you're too uptight to take dancing seriously. Don't make fun of the rest of us. Thanks.

2. People standing in the middle of the dance floor having conversations. Um, unless you're in a Rob Lowe movie like Less than Zero go have your conversation with your pals OFF the dance floor, okay? The rest of us are trying to dance.

3. Guys edging their way into me because I'm dancing too close to their girl friends. They throw their backs right into your face forming a wall between your and their girlfriend. Look, I'm not even paying attention to your girl friend, okay? Nobody's fucking anybody, it's only dance. Jealous fucking boyfriends. Sheesh.

In spite of all this rebop I've felt a new personal freedom in dance that I've never experienced before. I've been dancing to darkwave, witch house, EDM, goth, dubstep, industrial and everything else. It may not sound like much, but I've discovered a state of exhilaration and renewal I never thought I'd reach, and I owe to the ladies in dreads and face masks.