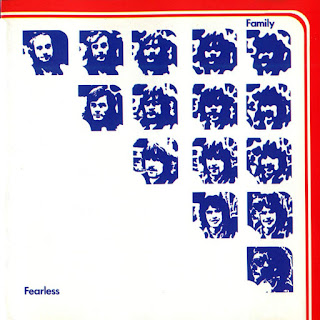 The first time I heard about Family was when I saw a photograph in Rolling Stone of a scrawny man with wild, stringy hair flying all over the place in shirttails on stage screaming into a microphone. He had a wild, unkempt look that was jarring. It was a picture of singer Roger Chapman, and the music his band Family played was equally jarring.

My interest piqued, my first audio experience with Family was their album Anyway. The cover was a famous sketch by Da Vinci of a cannon, all packaged in a clear vinyl sleeve.

The music contained therein was some of the most violent I’ve ever heard. Chapman sang in a booming rustic bray that was downright scary in conjunction with the violent music. One of the violent performances on Anyway was Strange Band, “Strange looking band were we”. Standing out in contrast to the band’s violence was a bright, pretty vibraphone played by band multi-instrumentalist Poli Palmer.

The vibraphone added a jazzy element to all the sonic ultra-violence. Chiefly notable was Palmer’s pretty vibes solo on Good News Bad News, bringing a lot of texture to the pummeling fisticuffs sound.

Family fully realized their vision in 1971 with the release of their fifth album Fearless, which deftly combined all the anger and beauty in one brilliant package. The album cover shows a clever computerized photo of each band member in a cascade, with the cell of each picture becoming more and more distorted until each member begins to resemble this one face at the bottom.

Fearless shows a wider breadth and scope than many bands’ efforts, as evidence din tracks like Sat’dy Barfly, a bouncy, drunken saloon number complete with barroom piano and a bevy of booming tubas. Chapman gives a Rod Stewart-styled vocal about a pub regular making his big Saturday night appearance, blowing his dough and cadging free drinks, eventually tearing things up. The tubas do a good job of creating images of a drunken man trying to keep his balance walking.

Crinkly Grin is a brief Zappa-influenced instrumental with Poli Palmer playing the lead melody on vibes. I thought it was a little too brief, to be honest with you. I could have listened to a lot more of that cool jazziness. Definitely not a filler track!

Larf And Sing is a jazzy number with an understated blues guitar lead by Charlie Whitney. The chorus is delivered acapella by the band in wonderfully layered harmonies.

Spanish Tide has a great ascending vocal line with the melody moving from gentle to violent, and when it’s Family violent the vibes come out to play a wild, distorted solo. John Wetton does a terrific job on bass and does some singing on this number. When I met him on a Roxy Music tour several years later I asked him to autograph my copy of Fearless, which registered a surprised look from him.

Save Some For Thee is a soul rocker with a punchy horn section. The song ends with a perky marching band playing the melody, years before Fleetwood Mac did that whole thing.

Family had an endless line of bassists and keyboardists coming and going in their band (some of them were John Weider from The Animals, Ric Grech of Blind Faith, John Wetton and Tony Ashton, among others). They released two more albums and right after Chapman and Whitney formed Streetwalkers, a soul/R&B influenced combo. Not quite the manic art school rage of Family, but still a good way to spend a Sat’dy night. 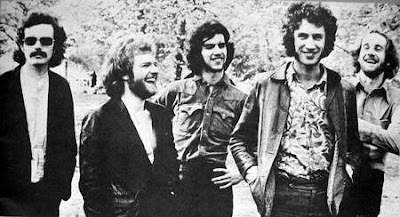 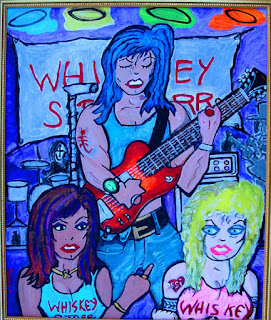 Welcome to my DIY gallery, works by a largely untotured artist punching his way through arts and crafts! Although I tried my hand at painting in the late Seventies I stopped for awhile and now find myself creating pieces just for fun, which is a nice way of saying I've become more of a hobby painter. The serious art days are far behind me, and that's alright. I like being a Sunday painter.

One of my favorite subjects is glam rock, so painting Seventies style hard rock stars rockin' out makes me happy. Right up above is a favorite of mine. It's a dramatic portrait of my man Desi rocking out some righteous metal a la Poison, Great White, etc. with his band Whiskey Starr circa 1988 at White Trash A Go Go, maybe English Acid, prob not Zombie Zoo. 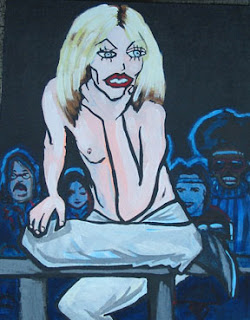 In front of the stage is his rich Jewish American Princess girlfriend wearing the official band tee getting pissed off at some cheap poodle-haired blonde who's been shaking her shoulders to Desi rocking out. I don't know about you, but I think a catfight is imminent.

Or how about a painting of Iggy based on one of the photos in back of the Raw Power album? I liked doing this one, and took great care in rendering a stylized look to his crazy eyes and lipsticked mouth. I really invested as much glam realness to the image as possible. 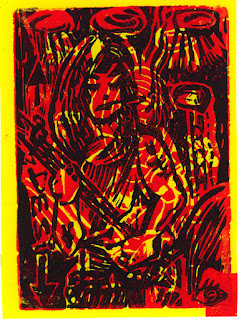 At this point it should be pointed out that when I first painted I used oils, giving everything a rough, expressionist look. I used a lot of heavy black lines and really slathered on the paints. It was a really violent look, however, later on when I got back in the game I used acrylics for a smoother, more refined look.

Getting tired of paints, I tried my hand at woodcuts because I liked the raw, violent look it gave, so here's yet another picture of Desi rocking out on stage with a smoke impudently dangling from his lips. I printed it with black ink on colored paper. I thought it turned out rather well. 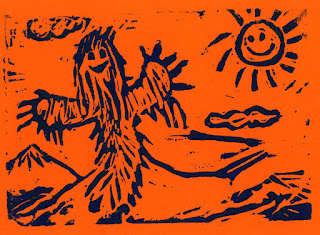 Here's another woodcut I call King Cactus, showing a very tall, happy cactus rejoicing in his native habitat. I always liked the way large cacti always had long arms reaching out for you, and this guy seems to be having himself a good time in the wild.

Pictured below is Payin' The Bill, a painting of Desi offstge enjoying margaritas and some taco combination plates with the his rich girlfriend paying the bill for her very kept boyfriend. Where are these girls??? I need to find me one, but that's another blog. 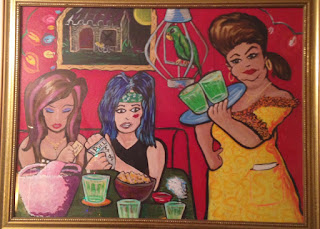 (I've Got) The Tinnitus Touch 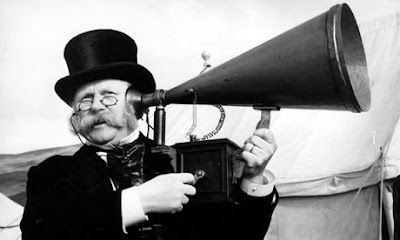 I love music. I love playing it and I love listening to it. I can't really go out and enjoy it anymore, though. In fact, I've only been to two shows last year and paid dearly for it. You see, I have this terrible problem. I have tinnitus.

Tinnitus is a condition where your ears are always ringing, the end result of too many loud bands, records, etc. creating permanent damage to your ear drums. After playing in bands for over 22 years and attending concerts for longer than that, my hearing is pretty blown out. I'm not alone, either. Pete Townsend, Neil Young and Barbara Streisand, among others, suffer from the same syndrome.

How did I get tinnitus? It comes from years of giving and receiving. Receiving means over 45 years of standing in front of the stage at shows by The Sex Pistols, Roxy Music, Patti Smith, Captain Beefheart, Queen and thousands of other noise addicts. Half these shows had me standing right by the speakers, and if I had to do it all over again, I would.

Giving means playing free jazz sax squall over a bed of not one, not two, but three distorted guitars turned all the way up to 10 and beyond. Wearing earplugs was never an option. I had to feel the vibrations shaking through my bones and tearing out my heart. I wasn’t some Adam Levine careerist dickhead, I was on a suicide mission to get my noise music played. 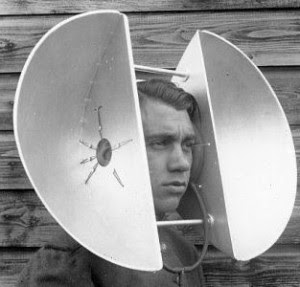 There are times when I can phase out the ringing, and then there are times when I can't. Sometimes I'll wake up at 3:30 in the morning and the ringing will be in full blast, like I just stepped out of a nightclub. It's pretty strange. My ears are ringing loudly as I’m sitting here writing,. But as I said, I can also ignore it, just as you would any annoying bit of sound.

I've been to the doctor and he said there's nothing wrong with my hearing. “That’ll be $three hundred dollars, thank you". All Western medical solutions are out. I may consider acupuncture if it works, but otherwise it's going to be this high pitched ring for a long time.

So, all you Facebook die-hard rockers, don't get pissed if I pass on invitations to your shows. And by the way, buy my books. Support is a two-way street.

The ability to hear is highly overrated, anyway. I was at the neighborhood laundromat, and it’s a reasonably small, modest one. It has the questionable perk of having not one, but two television sets. Both televisions were turned to the same program with the volume turned up very, very loud.

The television show that night was one of those Real Housewives programs where the women scream and bitch-slap each other for the better part of half an hour. It seemed longer than thirty minutes; quite frankly it felt like an eternity. It’s very hard to concentrate on folding your newly dried wash while both your ear canals are being pummeled by the shrill fighting of overly made-up women screaming their heads off.

I quickened the pace of my folding as I heard two, no, maybe three women shrieking and ruining their nails by raking them over each other’s faces, realizing that if I were truly deaf this would just look like inmates from a mental institution having it out. I would just move along, nothing to see here.

Well, the gals were still going at it like a vaginal demolition derby as I marched with my clothes out of the place, making a mental note to never go to the laundromat on a Wednesday night. Wednesday night’s not alright for fighting.

For more information about tinnitus, go to the American Tinnitus Association site at http://www.ata.org/ 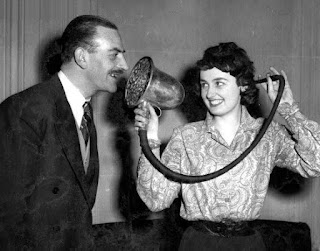