Needles and Thread and The Whole Damn Thing 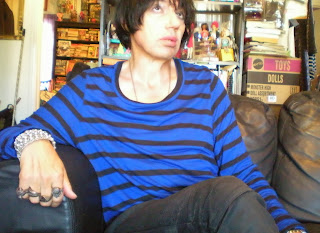 Well, Autumn's here and a young man's fancy turns to tops, warmer, stretchy tops. Pictured above is a quick black and blue top I made with a low scoop neck and chunky cuffs, just the way I like it. The quasi-femininity of the pattern is offset by a more masculine color palette. The end result is a top that surfs between both genders but in the long run exudes a mod look that's appealing for both boys and girls alike.
Another project that's been floating my boat are shoe bags, and lots of them. Disgusted with clunky shoe boxes that allow cockroaches to move into and better than those shoe trees with their tiny pockets that won't accommodate your chunkier boots, your best bet is to simply sew a few awesome shoe bags. I like really radiant material that gleams as much as the boots inside. 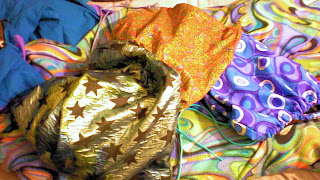 Pictured are three bags in particular: the glam bag with black stars is the bag I keep my Fluevog Prince George high heels in; the blue op art bag keeps my Doc Martens Langston petrol patent boots, and the gold paisley bag holds my gorgeous H by Hudson Alaska boots. Let them wear boots, but cover them in fabrics as exciting as the kinky kicks themselves!
********************** 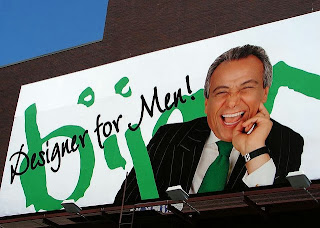 One of the more peculiar pleasures to be had driving around West Los Angeles is the bizarre double-billboard spectacle on the corner of Santa Monica and Sepulveda Blvds. monopolized by the now deceased clothes designer Bijan Pakzad, known more commonly as simply "Bijan". A Persian emigre who became the toast of Eighties Beverly Hills, his entire style was one of obscene opulence - my first exposure to him was three-page ads in Vanity Fair every month (!) espousing The Bijan Philosophy. Some of his remarks were lame ("There's no sight more beautiful than a pregnant woman") while others were kind of funny ("Wisdom's a gift but you'd trade it for youth").

He drove around in a bright yellow Rolls Royce, yes the big vintage ones and even designed a Limited Edition Bugatti, also bright yellow. Yes, Bijan had made it into fashion history, even garnering a mention in none other than the movie American Psycho - "Not the Bijan!" Patrick Bateman firmly commands Sabrina the hooker.
Bijan was the ultimate Beverly Hills Persian made good and lived large, well, up until 2011, when he suffered a fatal stroke. But even his tragic passing could not forestall the continuous flow of billboards showing his deliriously happy smiling face. After his passing the billboard on the western side of SM and Sepulveda announced "The Legend...BIJAN!" with Mr. Pakzad smiling from the beyond, letting us know he's still keeping tabs on things in West LA. Now the billboard on the eastern side announced, "The Legacy...BIJAN!" with his young heir Nicolas cracking a similar goofy smile.

Several months passed by and Nicolas seemed rather shy by posting new billboards that displayed the luxe line that captivated Beverly Hills. No pictures of Dad or himself, at all. Will this be the new standard? No more smiley faces? Could this be the future of Bijan???
Hell, no! Two months passed by and the new billboards are out with the newer, au courant Bijan smiling reassuringly at us from both billboards, proclaiming, "BIJAN...Designer For Men!" Hope has returned to the Westside. Take that, Ralph Lauren! 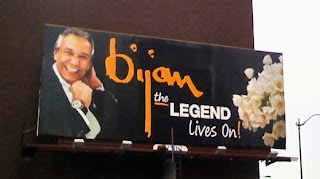 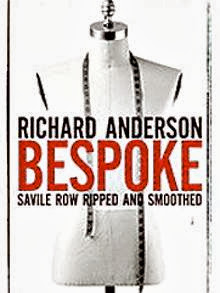 If there's anything more exciting than fashion magazines it's stumbling upon some great books about fashion, and I've recently had the pleasure of enjoying two great ones.
The first book is "Bespoke: Savile Row Ripped And Smoothed" by tailor extraordinaire Richard Anderson. Bespoke is one of the best books written about menswear and is absolutely mandatory reading for anyone involved in the craft of tailoring at all.
Anderson goes into great instructional detail all through the book on how to best fit a suit or pants on someone with an uneven body - like 99% of us out there. He explains how to even out a higher shoulder or a lower leg and make everything perfectly fitted. There's a wealth of information in his book that you'll find indispensable, complete with an excellent glossary of tailoring terms. There's also a fairly amusing back story on Abercrombie & Fitch that has to be read to be believed!
The other gem is "Couture Hats" by Louis Bou. Couture Hats has page after page of avant garde hats that stand somewhere between the corner of Alexander McQueen and Paco Rabanne. Even if you're not crazy about hats in general this is still an excellent standalone fashion photography book.
Part of the enjoyment of Couture Hats is picking your favorite designer. My favorite milliner is Stephen Jones for his broad scope of versatility. His designs run the gamut from classic Forties Black Widow noir chapeaux to demented Mardi Gras nightmare chapeaus and beyond.
Both books are available wherever good books are sold and Couture Hats is available on Kindle, too. Both books are highly recommended by me, the man in the polka dot top and silver biker jeans. Aloha. 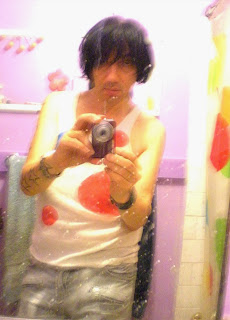 I have a tendency to connect certain areas to events in my life, so whenever I'm in the Miracle Mile District I think of Morphine. This is due to the unforgettable show they played at the El Rey Theater on Wilshire Blvd.

Supporting their "Like Swimming" album (1995), it was one of their last L.A. performances before band leader Mark Sandman's untimely death. The show was a colossal feast of wild and raucous sounds, hitting every nerve in my body and reminding me why music changed my life forever.

A power trio consisting of an explosive drummer, a fiery baritone saxophonist who literally doubled on tenor sax a la Roland Kirk and a cool singer who looked more like Richard Hell than Hell himself and played a grungy slide bass. Morphine's eccentric musicianship perfectly suited a bizarre repertoire of dark but highly melodic blues songs.

Their sound had a simultaneously urban and rural style that I found uncanny, the slide bass dredging images of murky Southern swamps and the growly sax bursting out cinematic scenes of psychotic detectives shooting guns at brick-lined housing projects.

When I had my band Cockfight I tried to get my bassist to play with a slide in tribute to Mr. Sandman, but the resident jughead couldn't appreciate the concept and refused. Opting instead for a lousy chorus pedal - how Goth - I unplugged it and told him to expand his horizons.

Anyway, posted here for your entertainment are a few covers of Morphine songs from various bands. Whether you like the way they're covered or not doesn't matter; the point is that Mark Sandman wrote a lot of songs that people to this day love listening and playing, the mark of a truly great artist.

Indie & The Jones do a damned wicked hard rock cover of "Honey White" with a wah-wah pedal guitar doing all the sax lines. The harmonies on the chorus sound surprisingly cool and add to the song. I think they added a good spin to the original. Very acid rock and audacious enough to be fun.

Then we have a Morphine cover band from Bulgaria (!) doing "Super Sex" and playing it with an almost wholesome Gerry & The Pacemakers luvvability. Dig those mad Bulgar boho chicks mouthing the lyrics to Super Sex. Weird! As weird as that scary Italian cover of Sonic Youth's "Starpower" that sounded just like Journey!