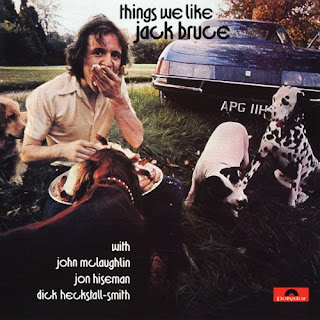 I had an epiphany when I listened to “Sunshine Of Your Love” by Cream last night. Ginger Baker’s drumming was amazing, his brilliantly tuned drums accentuating the bizarre staccato melody and Eric Clapton’s lyrical blues guitar with its perfect setting of sustain making the song sound beautiful. But none of it would have amounted to anything without Jack Bruce’s eccentric blues melody and understated yet perfectly rhythmic vocals.

To call Jack Bruce the pulse, the spine and the real heart and soul of Cream would be an understatement. The band simply never would have existed without him. Many bands before Cream played the blues in a reverential manner. What made Cream stand out from the pack was the way Bruce never oversang the blues like too many have before and after him, and his blues melodies were perfect in their respect for tradition while still adding something new and intriguing with each listen. 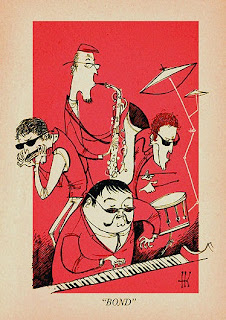 Most of Jack Bruce’s lyrics were written by poet Pete Brown and they worked brilliantly with Bruce’s dramatic songs, White Room being a good example. Brown’s lyrics were wild enough to keep up with Cream’s unbridled acid blues, my favorites being like SWLABR, Tales of Brave Ulysses, World of Pain, Deserted Cities of the Heart, and Passing the Time. The genius of his music was the way he balanced traditional blues with surprisingly sensitive flourishes, some viola playing here or some cello added to add a fuller dimension to Cream's sound.

Even after Cream’s demise Bruce still managed to keep the jazz/blues sound exploding on his first solo album, “Songs for a Tailor”. Tracks like Ministry of Bag, Rope Ladder To The Moon and Never Tell Your Mother She’s Out of Tune employed horns and keyboards, significantly expanding his musical palette after performing in a trio format for the past several years. 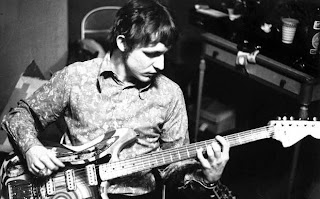 Occasionally he was driven to playing in Cream-style bands in the years to come because the fans demanded it: there was West, Bruce & Laing (aka Mountain pt. 2) and BLT and probably a few more I left out, so he was never remiss in keeping his fans happy. A true showman til the end.

I wish anyone seriously making a go of being a blues singer would study Jack Bruce because he embodies the best of blues in that he never hollered and always managed to sound Scottish even when tackling classics like Born Under A Bad Sign. Bruce never failed to steal the show, as witnessed by his grungy fuzz bass playing on Frank Zappa's raging instrumental "Apostrophe". And nothing was more shocking than hearing him sing lead on the chorus to Public Image Ltd’s song “Ease”. Jack Bruce was a timeless talent whose influence will be felt for a long, long time.

Also RIP to Clive Palmer of The Incredible String Band, Alvin Stardust, Rosetta Hightower, and the incredibly awesome Ian McLagan of The Small Faces and The Rod Stewart-fronted Faces. Music's getting better in heaven that it is down here! 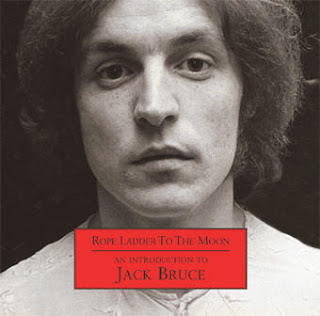 I Thought It I Said It I Did It So There 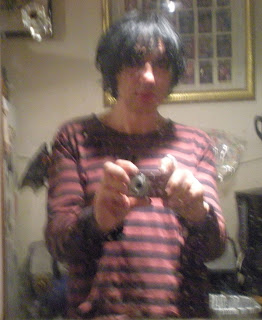 As a general rule I don't make a habit of attending punk rock reunion shows. So many of them have the air of a high school reunion, people checking out each other to see who's still carrying off their punk rock moxie and who isn't; Who's held up through the years and who hasn't, and even worse, people who were never friends in the past blowing kisses to each other like phonies. But all those anti-reunion sentiments were blown out of the water when I heard about the Dangerhouse Records Show at The Echoplex on November 9, 2014.

The lineup, which featured The Alleycats, Rhino 39, The Deadbeats, The Avengers and The Weirdos, couldn't be beat. The show was amazing on several levels. Not only were all the performances top-notch but the bands stuck pretty close to the script: each set was a brilliant approximation of what it was like seeing any of those bands at the peak of their musical power in 1978. Every set was a perfect replication of what each band sounded and looked like back in the day.

The Alleycats played a locomotively charged set that was high on energy and low on frills, just like the old days. Randy Stodola was reliable as usual, although I thought his guitar could have used better grounding and a reunion with his signature Big Muff from the past. A lot of people were asking about former bassist Diane Chai, but like all punk legends she's just a ghost in the ethereal ozone.

Rhino 39 were pretty clever by doing a batch of Dangerhouse covers, like The Randoms' classic "Let's Get Rid Of New York" and Black Randy & The Metro Squad's "I Slept In An Arcade", so even if you weren't a fan of the band they still had your attention with their cool choice of covers.

The Deadbeats mixed their weird theater with atonal jazzisms and it was great to hear "Muggsy" and "I Just Shot A Girl Called Maria" again after all these years. Scott Guerin's voice is still pretty dynamic and it was great to see Geza X playing his awesomely warped guitar. I wish I caught their previous reunion show with my pal Pat Delaney on sax but there's always You Tube to catch some of that wildness.

The Avengers came on and played everything I remembered from the shows we used to play with them at The Whiskey in 1978. It was so close to the old days I was stricken with an overwhelming case of melancholy, and I don't even drink anymore. One great song followed another: covers of Paint It Black, Money, and the classics: Car Crash, The American In Me and White Nigger. The only blemish was Greg's overly chorus-laden guitar, a little too BritGoth for my taste, but there was no question that Penelope Houston is the queen of West Coast Punk and one of the first (I did a show with her at Mabuhay Gardens in the summer of 1977).

The nostalgia flashback got to be too much and we decided to leave The Echoplex - no Weirdos tonight but I'm sure they were great. Watching Dix Denney walk around the club in septuagenarian Keith Richards drag was disturbing enough! The show was sold out even at a ticket price of $22 - I remember when these shows were a quarter of that price, but nevertheless it was a priceless night watching old friends play and simply enjoying the fact that you can't go home again but every once in a while it doesn't hurt to pretend.

If there's anything I like it's a band that doesn't take themselves too seriously and Status Quo are all that. I discovered a terrific collection by them of their songs played "unplugged" (they call aQUOstic) including their cover of The Everly Brothers' "Price of Love" as well as their classic "Paper Plane", sounding surprisingly less like the metal heads they once were and more like Nick Lowe's Rockpile. There's some great stuff going on here!

By no stretch of the imagination am I a big Everly Brothers fan but I'm loving this strange album they recorded around 1967 time called "The Everly Brothers Sing". Their arrangements take a more psych-pop approach to the great Everly's vocals, and there are several cool drug songs on here, too, like Talking To The Flowers, Mary Jane (MURRRRAAAY JANE!!!!!) and A Voice Within, which was the B-side to the equally great Love Of The Common People. Also check out their awesome cover of the Buffalo Springfield classic "Mr. Soul", which features slide guitar and mandolin from Ry Cooder, the premier session demon at Warner Bros. during the psych era. You can find Mr. Soul on You Tube - you won't believe your ears. 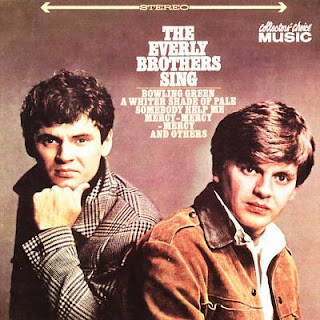 Rebecca recently played at the Steve Allen Theater in Los Feliz on November 5, 2014 with her pop-up band Cat Sabbath. In addition to Rebecca from Frightwig, Cat Sabbath included the great Sara Landeau from Julie Ruin, 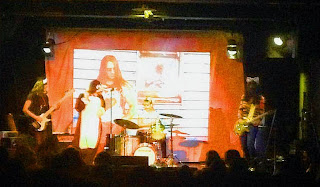 Marissa DeMeglio from Wolf Prize and a mystery singer. Rebecca's growling and crackling guitar was as menacing sounding as ever! It was quite a spectacle: four witches dressed like cats playing Black Sabbath songs like "The Wizard" and "N.I.B.", 21st Century variations on the "Double Bubble Toil and Trouble" incantation from Macbeth. Yeth!

By the way, if you're really into wimmyn rockers or Riot Grrl music you might want to check out my latest eBay auction: The Courtney Love & Hole cover issue of Flipside Magazine, which also includes Bulimia Banquet and Mudhoney. Here's the link, folks: 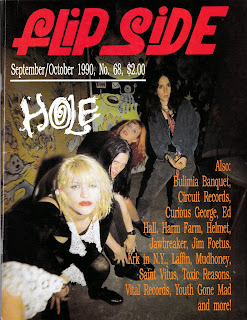 Lately I've been feeling pretty nostalgic for the good old days of rock brought to you by Circus Magazine, the gnarliest and ugliest rock magazine of all time. Although Circus was big in the late Sixties they really hit their stride in the mid-Seventies when they ran some of the most unflattering photos of rock stars performing. We're talking about live photos of Freddie Mercury coated in sweat with his hair getting nappy, Bryan Ferry singing with boogers hanging out of his nose or Ian Hunter from Mott The Hoople emoting with spinach leaves or stale pussy hair sticking in his teeth. You couldn't beat Circus Magazine in the disgusting factor. 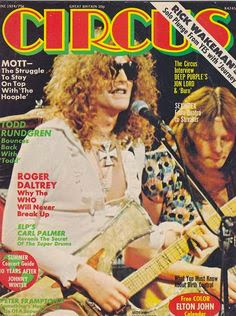 Yes, hard-working musicians were shot at angles aimed right under their nostrils or luckily capturing their double chins, and there was always plenty of angles getting all those hairy chests just holding up all that valuable rock star sweat. Yum! Who couldn't resist dynamic snapshots of Ian Gillian's sweaty armpits with arms raised in the air? It's like that Junior High School newspaper covering the latest sports event.

The very pages of Circus just dripped ooze no matter how you sliced it and it was two steps away from being Scratch & Sniff. Why, Hit Parader Magazine almost turned green with envy. They tried to compete with their own brand of sweaty, smelly looking rock stars but they were no match for the true herpes festival that was Circus Magazine! Excelsior! 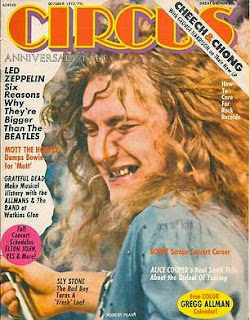