If there was ever a genre of music that was idiosyncratically European it was the brief period that spawned space rock. Strafing through the first half of the Seventies, space rock blew minds all over Europa and hardly made a dent in the United States. Psychedelia mixed with sci-fi and surreal theatrics, bands like Hawkwind, Magma, Gong and Amon Duul, to name a few, took Pink Floyd's blueprint for musical madness and took it ten steps further.

If space rock ever produced a hit single for the Top 40 charts it was the insanely catchy rocker "Silver Machine" sung by none other than future heavy metal hero Lemmy Kilmeister, then Hawkwind's bass guitarist. Originally released in 1972, it ripped brains apart with a locomotive 4/4 beat, hypnotic guitar power chords and enough white noise to keep the space heads happy. Silver Machine was a million seller that enjoyed repeat releases selling millions and topping the charts every time.

Silver Machine features lyrics that recall hot rod songs from the Sixties making space travel exciting with promise of a thrilling ride. Who wouldn't want to jet away to the cosmos on a supersonic space craft with topless dancers and Lemmy toking a joint with you?

You can't keep a great rock & roll song down so naturally Silver Machine has had its share of covers, and what wild covers to choose from. Pictured above are The Sex Pistols from their last tour playing the space classic. The song fits in so perfectly with The Pistols' oeuvre it's positively uncanny: Steve Jones summoning up Mick Ronson's power chording, Paul Cook's behemoth foot stomp and John Lydon topping it all with insane abandon. Miles, nay, light years cooler than "Holidays In The Sun".

Rounding out our tribute to Silver Machine is a brilliant and unexpected version from the Ukulele Orchestra of Great Britain, happily chugging away on their exotic gee-tars and sending me to outer space via the UK, Maui-style. One wonders what other uke gods like Tiny Tim and Arthur Godfrey would have done with the same tune. These guys are great.

Every time I hear Silver Machine I just want to get up and dance and I know I'm not the only one. The song's been played in countless TV shows - all European, of course - like the awesome comedy Manchild as well as others. I'm looking forward to hearing more versions of Silver Machine to come, the weirder the better.

Fashion Or Fuck Off 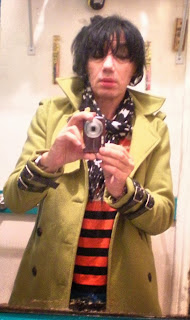 Everyone discovers their love for fashion in different ways. Some find it on the cover of fashion magazines, some are piqued by an iconic image of a Steve McQueen or Audrey Hepburn movie still, but here is my story.

Around 1961 my family lived in Providence, Rhode Island and one of the most important elements in the house was fashion, clothes, style, et al. Without being fanatic about it my parents both worked in either making or selling clothes. My mother had a sewing machine and a tailor's form which she used for alterations for some extra money. She also babysat unruly children but we won't even talk about that.

As a sideline to his work designing at Brown University my father had a couple of menswear stores in Downtown Providence that specialized in accessories. How amazing, a store that specialized in hats, ties, socks, cufflinks and other accessories. It was great. I remember the front sign dazzling the street in neon lights, standing in between the movie theaters, smoke shops and whiskey soaked steak houses.

I remember walking into my father's closet by the living room and seeing and endless row of suits and topcoats with all his hats on the top shelf. There was the black wicker hats, brown homburgs, dark gray fedoras, he had so many of them.

I'd walk into the closet and just stare and study everything, my four-year old mind racing and taking in all the different styles and fabrics. It set off a torch in my mind.
"Are you okay, Andy?" my father would ask.
"I'm just looking at your clothes", I replied.
"Oh, well...don't get lost in the mess", he laughed. His closet felt like a jungle of menswear with shoe trees, hat racks and hundreds of ties dripping down the door like jungle vines.

Below the suits were rows and rows of shoes, loafers, lace ups, sandals, all fabricated of alligator, suede, cowhide, tooled leather, and a pair or two of patent. On the door of the closet was an endless tangle of ties, ties of every design and style, some silk, some weaved wool and others silk satin.

I spun around the closet taking in the whole thing. Every fabric had its own fragrance and feel so I touched and smelled everything, meaning every fabric and article of clothing had its own personality.

On the flip side I'd run into the kitchen and watch my mother sew a dress on her sewing machine. I'd stand right by the sewing machine and watch her run the stitches down the hem. I'd stare at the dress slowly taking shape before my eyes and occasionally look at my mother's face as she sewed.

Whenever something went wrong she'd curse in Hungarian and I'd look at her hoping this would get fixed but it wasn't that easy. Seams had to be ripped and sewn together again. It seemed like there was always clothes being made or being styled.

Several years later my interest in clothes got jump start during The British Invasion when bands rocked mod fashions and with their rail-thin bodies looked more like models than musicians. Looking at bands like The Who or The Small Faces made me want to dress up in the most colorful fabrics - satin and velvet in particular.

At the end of all the trends I've been through like glam, punk & goth I have finally settled in for my own stamp of menswear style. There's still a lot of rock & roll style apparent but enough of my dad's fabulous closet and my mother's Eastern European ingenuity to round it out. If your parents largely shape the future of your life like it or not then mine definitely set the pace with their careful attention to all things fashion.

We've come a long way in style but something new sticks in my craw and that's the new mandated look for clerical staff these days to NOT dress up but dress in something termed "business casual". I don't like it. I don't like it at all. Business casual basically means dressing up with work minus a suit jacket and tie.

This bugs me because it's a fake attempt at exuding a veneer of informality in a work environment that's definitely anything but casual. How am I supposed to look relaxed in an office that's anything but? It's bullshit. And besides, what the fuck's so bad about wearing a tie? A dress shirt looks incomplete without a tie to top the overall look.

Generally, the argument in support of bullshit business casual is that people look uncomfortable in work clothes. This is ridiculous to me because I feel totally comfortable and happy rocking a suit with a pretty tie. What does make me feel uncomfortable is wearing a dressy pair of jeans and finding a top that won't offend that stuffy boss of yours. Do you see the ridiculous paradox in all this? Let me wear my suit and tie, and fuck you if it makes you uncomfortable. My suits make me feel casual. Deal with it.

I regret to report that my friend Mike Vraney passed away on January 3, 2014 after a long battle with cancer. The founder and leading light of Something Weird Video, he educated movie fans about exploitation film in its many forms - lucha libre, nudie cutie flicks, Herschell Gordon Lewis, and more. He marketed a line of videos that popularized many forgotten filmmakers who all deserved a better chance at having their work viewed and enjoyed.

On a personal note I'd like to say that of all the collectors I've known Mike never came off as a know-it-all or copped a condescending attitude with his encyclopedic knowledge of exploitation film and was even very open to new movies, comics and radio shows. He was the kind of fan all artists dream of having.

Mike was a great guy, incredibly humble in light of his many accomplishments - he managed some of the biggest punk bands in the Eighties - never bragging but nevertheless proud of everything he accomplished. He truly practiced Al Flipside's motto: "Don't just be a witness". A lot of filmmakers, musicians and artists owe a lot to Mike. All I can say is that it was great being his friend, talking and laughing with him.

On an even personal note, after hearing of his passing, I took all the cigarettes I had left in my car and threw them in the trash. I stopped smoking last year and kept them as a challenge to my will power but now they don't even pose a challenge, just a dead end. Mike will be missed and I'll think of him every time I watch a great exploitation film, knowing he'd probably enjoy it as much as I am.