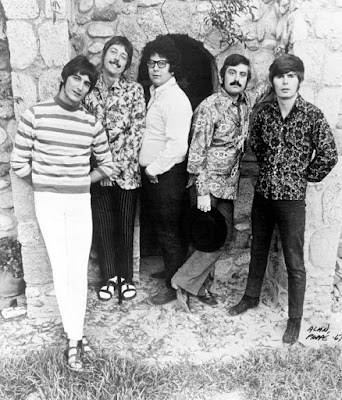 In the world of Sixties pop music there have been a small handful of bands that have stood the test of time and trends, endearing themselves to people of all musical tastes, and one of those bands is undoubtedly The Turtles.

Originally a surf band called The Crossfires, they got smitten by The Byrds protest folk-rock bug and inadvertently created a bizarre hybrid of surf-folk. The band played protest songs like Let Me Be and It Ain't Me Babe with a surf-rock style that made the band stand out in a big way. It also didn't hurt that cheery Mark Volman always played a whimsical foil to Howard Kaylan's dramatic vocals. The band was a lot of fun no matter what the message was.

During their four-plus years in the Top 40 The Turtles had a long streak of hits which lasted longer then many of their contemporaries like The Monkees or Paul Revere & The Raiders. Why? Maybe it's because they didn't have a gimmick, just a very straightforward approach to producing sunny yet provocative pop records.

By 1970, The Turtles called it quits in spite of their unbroken string of hits because of signing with too many managers and getting wrangled up in an endless stream of binding contracts. There were also complaints of royalties not reaching the right people.

Three members of The Turtles – Mark Volman, Howard Kaylan and Jim Pons joined Frank Zappa & The Mothers and recorded five great albums together, some of Zappa’s best work: Chunga’s Revenge, Fillmore East June 1971, Just Another Band From LA (I attended that show!), the motion picture soundtrack to 200 Motels, and the released-much-later Playground Psychotics.

Although the music produced was terrific it was probably the worst season in The Mothers’ careers, as it was fraught with horrific episodes like a hotel fire in Montreaux, Switzerland (immortalized in Deep Purple’s Smoke On The Water) and an attempted assassination of Zappa on stage at The Rainbow Theater in London, England, relegating Zappa to a wheelchair for the next 12 months.

During their tenure in The Mothers Mark and Howard recorded under the names The Phluorescent Leech and Eddie, which they used to call their new band, including Pons (drummer Johnny Barbata joined Jefferson Starship). They recorded about four albums, two for Warner Bros. and two for Columbia. The Turtles sound lives on in occasional reunion tours and the band has never lost their sense of humor in spite of a career loaded with speed bumps and brick walls.

If you're a success in music you're going to inspire a spate of imitators who are either influenced by your sound or simply want to cash in on your magic. Whatever their motives may be, this blog tracks down three records heavily influenced by The Turtles sound, largely written by the team of Gary Bonner and Alan Gordon:

Billy Nicholls was a friend of The Small Faces, and that was connection was put to good use with Ronnie Lane and Steve Marriott playing and producing his album, Would You Believe? Would You Believe is an interesting album in that it's more Sunshine Pop than Freakbeat. Sunshine Pop didn't really hit England as much as Freakbeat did, so Nicholls' album is very different than the usual album coming out of the UK. Several of the tracks have a strong Turtles influence in them, especially Daytime Girl and this one, Life Is Short.

Nobody sang a more heartfelt ballad than Howard Kaylan and you can definitely hear echoes of that in Skip Biffferty's great moody, romantic sing, Reason To Believe. Brief but touching!

You're Gonna Hurt Yourself - The Bystanders

You're Gonna Hurt Yourself was originally recorded by The Four Seasons but this version has more bounce. The harmonies recall classic Mark and Howard, too. Again, a good English tribute to the boys from Westchester, who obviously made a strong impact on the UK, especially with Marc Bolan, who used Volman and Kaylan as his backup singers on countless classic T. Rex hit singles, as well as on the Electric Warrior and Slider albums. Perhaps they were good luck charms for him, bringing him luck at every turn.