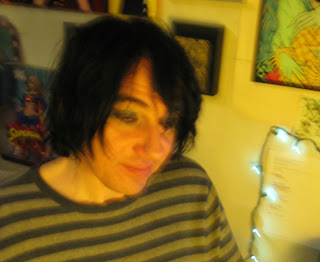 When it comes to posting blogs a small surplus of pictures and other supplemental material begins collecting like a crowded garage. Sometimes you toss out the extra material and other times you let it sit around on the oft-chance it might get used again in some capacity. For your entertainment I offer you assorted leftovers from blogs I've posted in the past six months. 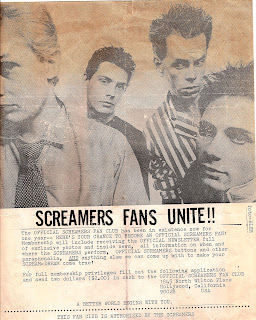 In my blog "Rock & Roll Confidential Part 7" I posted a mail-out flyer from The Screamers celebrating the Christmas season, but that wasn't the only artifact I had in my vast punk rock collection. In addition to other Screamers goodies I owned was this terrific Screamers Fan Club entry blank. To the best of my knowledge nothing ever got sent out to their fans, but what an easy way to get $2 out of people.

While we're on the subject of Christmas, I always found it ironic that the band the symbolized fun in the summertime, The Beach Boys, had such a great Christmas-y sound during the later days of their Capitol Records career. "Pet Sounds" up until "20/20" had so many pretty choral arrangements that verged on the spiritual it's uncanny: "You Still Believe In Me", "Cabinessence", "I Know There's An Answer", and many more tracks sound so seasonal. In fact, I strongly urge you to listen to any Beach Boys circa 1966-1969, five albums in all, while sipping spiked egg nog and signing your holiday cards and dressing up your Xmas tree or any other weird religious arboretum.

When I was a teenager I used to get the Los Angeles Free Press regularly, and one of the highlights was reading "Notes of A Dirty Old Man", Charles Bukowski's weekly column. It wasn't really thought of as high art back then; to be perfectly honest Buk was considered a bit of a crank back in the day, which probably suited him well. Nevertheless, I still followed him avidly, even catching him at a reading at The Troubadour in 1976. Memories are made of this. (Click on image to enlarge)

Another weekly column I followed loyally in the Los Angeles Free Press was The Glass Teat written by the irrespressible Harlan Ellison. I had the pleasure to expereience the sci-fi legend in the flesh at The Silent Theatre (aka The Cinefamily). The Silent Theatre was a very tiny and intimate place to see this dynamo of speculative fiction. Mister Ellison spent the beginning of the show hanging out with the fans waiting in line to see him, channeling Don Rickles and Shelley Winters with his extremely extrovert exhortations to one and all. Just writing about him makes you write like him. Crazy, baby!

Harlan talked about his career writing for television, with brief video clips showing past works, including a great "Burke's Law" segment written for Buster Keaton that completely honored and respected Mr. Keaton's comedy schtick, even for a silly cop show. Ellison related a tale of scamming Gloria Swanson out of retirement to do a "Burke's Law" segment, no small feat as she had no intention of returning to movies or TV at all. He was also humiliated by a "Flying Nun" credit which he couldn't run away from, and finally confessed he only wrote it in the hopes of getting into Sally Field's pants. Who could blame him?

A great time was had by everyone, even Harlan. The only criticism I had of the show was that questions about the current explosion in sci-fi/fantasy/horror in popular culture was never breached, because everyone thought it was more ntertaining listening to Harlan talk about his past crazy antics. A little more writer and a lot less personality wouldn't have hurt. In my blog post on "Christopher Milk" I mentioned John Mendelsohn's band The Pits playing The Starwood and actually doing the freakbeat/heavy metal hybrid before Cheap Trick. Well, here's the handout set list (programme?) handed out at the show. It was a night to remember.

Before I go I'll leave you with yet another great yodelling performance from the fabulous DeZurik Sisters from my "American Yodeling" blog. Here they are singing "Hillbilly Bill". Enjoy!

The DeZurik Sisters performing "Hillbilly Bill".
Posted by Andy 7 at 5:00 AM