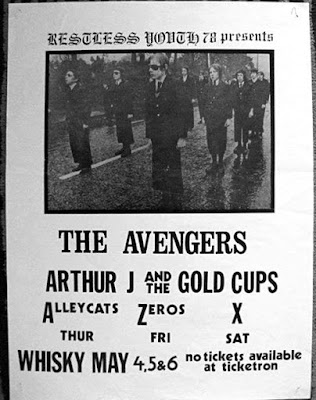 This was a three-night engagement I played at The Whiskey A Go Go with my band Arthur J. and The Gold Cups, which was an all-star punk big band (I played saxophone), The band also featured the late Brendan Mullen on drums, Geza X on guitar, Paul Roessler on keyboards and a host of others.

Because it was a three night engagement we had a different band open the show each night, and as you can see X opened one night and The Alleycats opened another. The Avengers headlined and were absolutely amazing. I think Penelope Houston is the best punk rock singer I've ever heard, bar none.

Brendan designed the poster and organized the show. 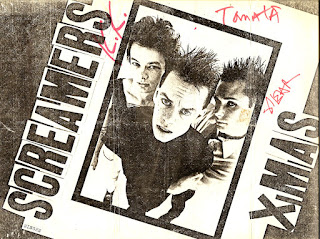 In September of 1978 I was asked to play sax with The Screamers at The Whisky A Go Go. Pat Delaney from The Deadbeats and I joined them for their exciting encore of The Germs' Sex Boy, re-titled Sax Boy as a tribute to us.

Lead singer Tomata Du Plenty and synthesizer man Tommy Gear prowled the stage like a pair of wild leopards singing the Darby classic while Pat and I honked away. At one point I was given a short sax break and I tooted the riff to Punish Or Be Damned. Tommy winced painfully. Good times.

My friend Lisa Brenneis joined Richard Meltzer's new band Vom as the bass guitarist. Meltzer just moved to Los Angeles from New York, which was a big deal because he was one of the most idiosyncratically New York rock writers around that time. He put together a pretty interesting band, which besides Lisa also included Metal Mike Saunders and Gregg Turner. I may have missed one or two other guys; it was a long time ago.

Vom played their first show at the Whiskey A Go-Go and Lisa invited me. What I didn't count on was being recruited during sound check to act as their official "bodyguard". In order to distinguish me at this dubious job they gave me one of their custom made shirts (seen in the photo). This meant keeping the crowd from killing them, because Meltzer made a few disparaging remarks about Hollywood punks being phony and plastic. He wasn't being serious about it; in fact he was method acting like a locker room wrestler trying to rile the local kids up, and it worked. A little too well!

The club was filled with all the usual local punks ready to boo and heckle the band to death. The entire staff of Slash magazine was there heckling the band to death, as well. Vom went into all their killer numbers like I'm In Love With Your Mom, Electrocute Your Cock, and Broads Is Equal. Kids were picking up anything in sight and flinging it at the band, and it was my job to admonish these twerps from throwing things, like a stodgy old school teacher. Nobody listened to me. I hated it.

Meltzer even chided me from the stage. "Hey, do your job, Tall Guy in the Vom Shirt. You're supposed to be protecting us. By the way, the fat punk chick in the front, you look like a piece of shit with lipstick!" Try defending someone who talks like that.

Not content to merely piss off the audience, they now incurred the ire of the club itself, when they went into their intense rendition of The Doors' My Eyes Have Seen You, which featured Meltzer and Turner pulled out a pickled jar of cows' eyeballs and bursting them on stage and throwing them out into the dance floor at all the heckling punks. The floor was sticky and slippery from formaldehyde goo with crushed eyeballs all over the place.

Well, after this Vom-itous bit of show business the sound man, like the voice of Zeus, thundered over the PA, "OKAY, ASSHOLES, GET OFF MY STAGE! NOW!!!" Of course, this made all the punks cheer as if God himself stepped in and sent the band to Purgatory.

There's a happy ending to some of this, of course. Meltzer shortly after got a hot radio show on KPFK-FM where he invited every punk band he previously insulted and they all played phony kissy face with each other, and then my picture showed up in a crummy fake "New Wave" magazine. Of course, all the idiot Hollywood punks chastised for posing wearing a Vom shirt. Never mind that these were the same people that couldn't kiss Meltzer's ass hard enough to get on his show.

Come to think of it, Richard Meltzer was probably right the first time. Hollywood punks are a bunch of phony assholes, after all.