They never get it right in the movies. You always see the funeral and its raining heavy or it’s dark and cloudy. The day we buried my mother, 40 years ago this week, it was sunny, hot, and stifling. The funeral was at Mt. Sinai Cemetary in the Hollywood Hills where the smog hangs like a gray curtain, a blanket of car exhaust. The year was 1970 and the Sixties were dead, you could say my mom died with them. My father cried, my brothers cried, but I couldn’t because I was in a state of shock, just staring at the closed coffin, refusing to believe it was over, confused and frightened. The tears wouldn’t come, although they eventually would later.

Her plot had no trees around it so the light was just blistering from all sides. To this day when I think of my mother’s funeral all I think of is the unforgiving sun and its heat. I was only 13 and just quietly watched the speeches, the crying and the terrible sunlight.

When we got home we performed the Jewish ritual of mourning: for seven days we sat on the floor (no chairs), wore torn clothing, and covered all the mirrors in the house. People from the synagogue would come to visit and pay respects. Of course you had the whackos bragging about being her best friend. The truth was my mother was a lone wolf, trusted no one and liked no one. She was the most antisocial woman I ever knew. Some of these “friends” even tried to come by under the pretense of mourning and started riffling through her bedroom. I kicked them out and moved into her bedroom and slept in her bed. (My father had his own bed).

My mother, Elizabeth, was 43 when she died, and was 40 when she was diagnosed with cancer. A smoker who smoked about 2 packs a day (Kent Cigarettes), she loved her smokes so much she even sewed a leather cover for her flip-top packs. I remember walking with her to the Doctor’s office for her routine radiation treatment. She told me her Doctor sat behind his desk chain smoking, saying, "These things are a bitch to quit, aren't they?" (Back in the Sixties it seemed like everybody smoked). I’d sit there dutifully in the waiting room for her to come out after her treatment. Sometimes we’d walk home, or if she felt weak, we’d take a cab home. We’d go by the huge excavation site ten blocks wide – “Do you see that huge crater? That’s going to be Century City. Isn’t that exciting?”

After the mourning stage was over the school year began again and my classmates who used to bully me and beat me up now just walked away whenever they saw me, staring at me like I was a leper. I was now some kind of phantom. My mother’s antisocial attitude made sense to me. She knew.

The sadness felt like it would never end, but of course it did. Two years later I discovered T. Rex, Roxy Music, New York Dolls and glam rock, and the world was still colorful. Platform shoes, elephant flares and rock & roll. Somehow the sun didn’t seem so ominous anymore.

2010: Last week I went to the cemetery to visit my mother’s grave on her 40th anniversary, and lurking down the hill above us was a young coyote. It very shyly trotted over to a big, lush tree and lay in the dark shade, away from the blinding sunlight. The message was clear: we are vilified but we will keep wandering alone because it’s who we are. And we like it that way.
Posted by Andy 7 at 8:58 PM 6 comments: 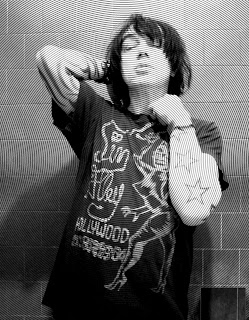 Well, we've reached the end of the first half of the year, one of the most depressing, isolating, and selfish eras in history. I'll see if I can make a little sense out of it, but I'm no magician:

January - The 20th anniversary of "Horses", the first record I released. Getting that first record in my hands was one of the most exciting experiences I've ever had. Those were wonderful days, times that cannot be relived or reclaimed, which is why band reunions are such sad affairs.
Gary Baseman gave Rebecca a wonderful painting dedicated to her, which ended up as this year's Lollapalooza poster and t-shirt. Since our accountant passed away we found a new guy who's pretty cool; he likes hardcore punk and plays chess, too. That's pretty hip!

February - Got a new HD flat-screen TV in our bedroom and the first thing we saw was the Dr. Pepper KISS commercial that Rebecca did wardrobe for. Funny. Mixed some tracks for No Policy for an upcoming Montreal hardcore compilation CD.

March - Progress is going well on the Crash Walker serial, which will progress into a novel. Having a great time writing it. It will last somewhere between 16-17 chapters.
Began reading lots of Patricia Highsmith (Little Tales of Misogyny, The Price of Salt) and Chester Himes (The Real Cool Killers, Run Man Run). Great inspiration.

April - More people I knew passed away this month: Jason O'Gullegher (aka Big Jason) and Malcolm McLaren. It's very weird reaching the age where your peers begin leaving you because your generation has gotten that much older.
People at work are acting so panicky and freaked out, running around pissing and screaming like rats on a sinking ship. I had to take a "mental health day" off, a few actually.

May - The Fairfax and Showcase Theatres shut down and bookstores like The Bodhi Tree and A Different Light closed down, too. All the other bookstores are trying to sell me computer books like Kindle, eBook, etc. After a long day of typing on a computer I can't see myself relaxing in front of yet another computer screen blasting out a book. Paper always wins.

June - Worked as an Inspector (Supervisor) at the polls on Election Day. Unfortunately the polling place was at Park La Brea, the most exasperatingly confusing piece of real estate ever created in Southern California, over 100 acres of look-alike streets and look-alike buildings. Even Christopher Columbus with a compass would get lost there on a good day. I had to keep the Democrats and the Republicans from beating the shit out of each other, seriously. But I'll be back in November to do it again. I think it's time for another mental health day off.
Posted by Andy 7 at 6:30 AM No comments: 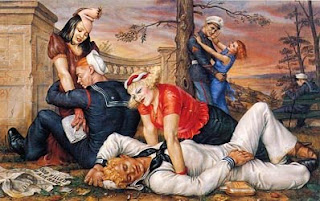 Paul Cadmus 1904-1999. He died five days before his 95th birthday. He was the most outrageous and overlooked artist of his time.

1. Shore Leave (1933) - Sailors spending their leisure time drunkenly chasing girls instead of helping little old ladies cross the street. "Secretary of the Navy Swanson said, 'the painting represents a most disgraceful, sordid, disreputable, drunken brawl, wherein apparently a number of enlisted men are consorting with a party of street-walkers and denizens of the red light district. This is an unwarranted insult, and evidently originated in the sordid, depraved imagination of someone who has no conception of actual conditions in our service" - Time Magazine, 1934.

2. YMCA Locker Room (1933) - Guys in a locker room in various stages of undress (mostly nekkid) primping and checking each other out.

3. The Fleet's In! (1934) - More gobs drunkenly cutting up with torn-up hookers. "As opponents of censorship we cannot condone Admiral Hugh Rodman's burst of indignation at the striking canvas, 'The Fleet's In!' by Paul Cadmus. Admiral Rodman has had a long and distinguished career as a sailor. That does not make him an art critic. The PWAP show is an art exhibition, not an enlistment bureau for the Navy" - Washington Post, 1934. 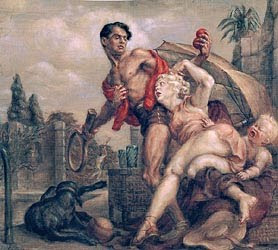 7. Seeing The New Year In (1939) - A portrait of a party that's gone on way too long, chicks passed out while sleazy guys undress them passed out, nuzzle them, and there's even a guy in the background putting the make on another guy (!). "The painting doesn't have the air of fantasy. There is a cold, hard restlessness in the drawing that suggests that the artist has been determined to give you the facts and nothing but the facts, but at the same time the artist's complete absorption in every inch of wickedness in the picture attests too great an interest in wickedness for its own sake" - New York Sun, 1939.

8. Sailors and Floozies (1938) - This time the tables are turned: our fightin' heroes are all passed out cold, and the prostitutes, looking manly, suggesting transvestitism, are going through their pockets. A crumpled newspaper on the ground bears the headline, "1000 Killed In Air Raid". The sun is bleakly setting. "Paul Cadmus is on another red-hot naval rampage...painting with brilliant finesse a theme doused in indecency!" - New York Post, 1938. 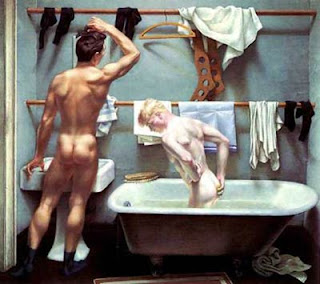 11. Playground (1948) - Tenement boys hanging around the New York playground aimlessly looking around waiting for something to happen.

12. Finistere (1952) - Boys in Euro bikinis hanging out on bikes in beach-side Italy. One even brandishes a big Italian bread!