Cleaner Than A Broke Dick Dog 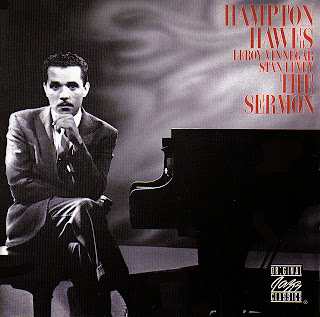 Miles Davis, in his autobiography refers several times to anyone with badass-cum-suave style as someone who's "cleaner than a broke dick dog". While most jazz musicians of the Fifties and Sixties had crazy cool style a few really stand out for me, the reason being that in addition to being terrific players they had wicked sartorial style going on that complemented their music. While everyone knows Miles was legendary for being a fashion plate with his beautifully tailored Italian suits there were some other guys that were equally as slick.

One jazz icon who instantly comes to mind for his great fashion style is legendary pianist Hampton Hawes. A bebop and post-bop artist with male model looks, Hawes was always pictured wearing the smartest tailored suits and striking the most smoldering looks at the camera.

There was always something haunting about Hawes and his troubled life which he documented in his memoir, "Raise Up Off Me", co-written with jazz writer Gary Giddins. In addition to being one of the sharpest dressed musicians in jazz he bears the distinction of having his prison term pardoned by President John F. Kennedy in his last year as President. Legendary stuff. 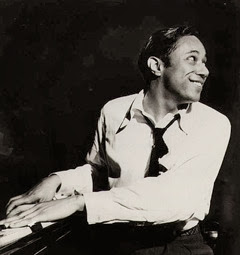 Another legendary player who filled out his threads with crazy cool was pianist Horace Silver, one of MIles' favorite pianists. Silver is best known for his immortal recording "Song For My Father", one of the ten most popular jazz compositions of all time. A funky blues-style player who could finesse any style of music, Silver's image is that of a hipster with neatly processed hair wildly tousled as he intensely attacks his keyboard. With his clothes still neatly pressed! That's crazy cool.

Like Hawes, many of Silver's albums shows him resplendent in a beautifully tailored suit and tie, bespoke probably - the fit's just too good. Nowadays Silver dresses more casually but still looks neat as a pin. As I get older, I find this look much more admirable than the" heroin-chic I just fell out of bed" type look. It gives me hope. Despair doesn't win the day anymore. 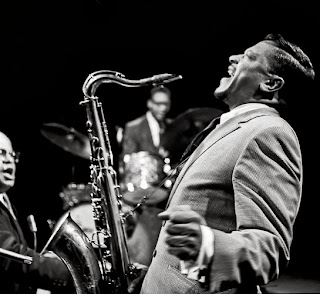 Illinois Jacquet was arguably the founding father of R&B saxophone, born from his wildly honking tenor sax solo on Lionel Hampton's record "Flying Home". Jacquet, who shares the same birthday as me (10/31, different year) always counterbalanced his raw, abrasive saxophone playing with the some of the sharpest suits worn in jazz.

Like Horace Silver he also had smooth hair - his mother was Native American - and also was a pioneer for being the first jazz musician to be artist-in-residence at Harvard University in 1983. He also jammed saxes with President Bill Clinton at his inaugural ball at the White House in 1993. Now that's crazy cool.

While I don't seriously expect every musician to bust out a Brooks Brothers suit and Florsheim shoes to rock the room the point I'm really trying to make is that fashion and a clear sense of personal style can be the greatest compliment to whatever music you choose to play. Because long after the music's over everyone will remember the way you looked, and you only have one chance to make it count. 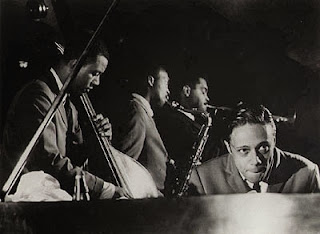 Even Angels Crash And Burn 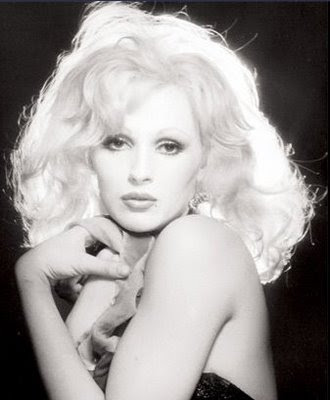 Once upon a time Andy Warhol adopted the idea of creating a studio star system for his Factory, and among his new stars was a drag queen triumvirate: the exotic and funny Holly Woodlawn, multi-talented rebel Jackie Curtis, and a mysterious, quiet beauty named Candy Darling.

Candy was the most haunting of the three because she looked like a modern Carole Lombard and spoke in a measured Jackie Kennedy whisper. She was more beautiful than Edie Sedgewick or most of the scenester girls in New York, and unlike most drag queens wasn't even terribly sexual. She was primarily asexual and her biggest passion was to be worshiped from afar.

Her live-in boyfriend/companion Jeremiah Newton produced the documentary "Beautiful Darling" and appears through most of the film, not only because he was Candy's confidant but also because he was the recipient of Candy's personal articles from her mother who didn't wish to keep them after her death.

A few photos of the young James Slattery (future Candy) are shown and it's pretty obvious he was good looking even as a boy. Raised in a working-class conservative home that had no sympathy for homosexuality, Slattery briefly took cosmetology classes to perfect his drag look. A role in a an off-Broadway show written by Jackie Curtis caught the eye of Taylor Mead, which brought Andy Warhol's attention, and the rest is history.

Sandwiched in between archival footage are passages from Candy's diaries, ineffectively read by Chloe Sevigny as they are read too expressively. A real Candy voice would be completely deadpan, no matter what her feelings called for. Candy's deadpan humor was just as lethal as her looks.

Beautiful Darling could have also benefited from more film footage from her Warhol pictures, of which there wasn't enough, and the footage of her from the Santa Claus slasher pic "Silent Night Deadly Night" would have been nice, too. While I liked the documentary I didn't think it really went in deeply enough, other than the surprising dirt on his working relationship with Tennessee Williams during the production of his play "Small Craft Warnings".

The film ends with a wretched cover of Lou Reed's "Candy Says", a song as beautiful and haunting as its subject. But any Candy Darling doc is better than none at all, and if there's an immortal blonde as haunting as Candy its' the equally under- documented Veronica Lake. Some blondes just can't catch a break. 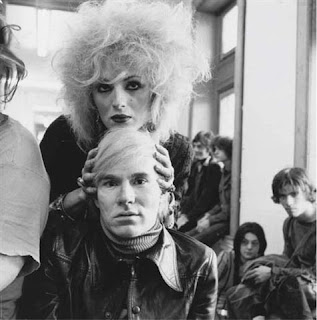 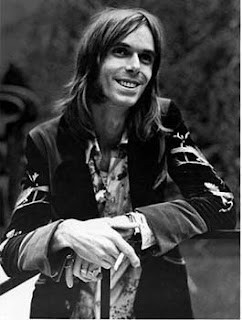 Unimpeachably the most criminally overlooked genius of iconic Sixties and Seventies rock records is mild-mannered keyboardist Nicky Hopkins, who not only played on countless classic records, some credited and just as many without credit (especially The Kinks and Rolling Stones). To say he was a musician of merit on par with Eric Clapton, Keith Moon, or a Mick Jagger would not be an exaggeration. In fact, by virtue of the fact that he created all his arrangements himself and set the mood for a sweeping variety of musical moods is remarkable. It could even be said that many of the songs he played on would never have turned out as effectively had it not been for his amazing piano parts.

Julian Dawson's bio "And On Piano, Nicky Hopkins" is an exhaustive task as it goes into exhausting detail about Hopkins beginnings playing with Screaming Lord Sutch and Cyril Davies, the Davies connection opening up doors with what would become the biggest rock stars of the next fifteen years. His book is indispensable not just about his subject but for anyone who's interested at all in the British rock explosion of the Sixties.

The cover to this book is very telling: Hopkins on stage with a popular dynamic group sitting in a very dark corner of the stage but virtually unseen. It sets the tone for the whole book.

To read just a few of the recordings he played on is staggering: the clanging jail doors of "Jailhouse Rock" and quaintly melodic accompaniment to the raunchy "All Shook Up" with The Jeff Beck Group (Beck comes off as a painful prima donna, too); the lovely childlike lines that open "She's A Rainbow", the spidery blues lines on "Sympathy For The Devil"; the creepy barroom intro to The Kinks' "Death Of A Clown"; the chilly upper register tinkling of The Beatles' "Birthday" and Jackie Lomax's "Sour Milk Sea", and that's just his English work in brief.

Ray Davies also comes off as a Dickensian villain repeatedly using Hopkins for classic Kinks albums like "Village Green Preservation Society" and "Something Else" with no credit given on the liners but somehow justifying it by saying, "A session player is hired as a worker and doesn't qualify for an album credit". Um yeah, Ray, but this guy wasn't given piano parts - he wrote all his own parts, big difference. That's total genius.

A visit to San Francisco gave Hopkins a major boost in his rep by bands begging him to play with them, resulting in him leaving his mark on immortal SF albums like The Steve Miller Band, Jefferson Airplane's classic "Volunteers" and a residency with Quicksilver Messenger Service. Some even claim his presence elevated Quicksilver who needed a melodic base to counterbalance their previously incessant jamming.

Hopkins unfortunately hit the skids touring with The Rolling Stones on their notorious "Cocksucker Blues" tour where he bought the whole Elegantly Wasted aesthetic and began drinking heavily and developing a heroin habit, not unlike the kind Bobby Keys also fell for in his bio. (By the way, The Stones tried hooking a young Ry Cooder into their satanic dope circus and he very promptly blew them off, claiming The Glimmer Twins to be "sinister and reptilian". Hah!)

Hopkins later cleaned up his habit and embraced Scientology as well as played on Beatles solo albums, and also like Bobby Keys was the victim of many bad scenes with the not so saintly Yoko Ono. Hopkins' biggest clients towards the end of his career included his piano performance on Joe Cocker's schmaltz classic "You Are So Beautiful", touring with Leo Sayer and even a stint with Julio Iglesias (!). And you thought you resume was killer.

Julian Dawson should be applauded for taking such an exhaustive subject as Hopkins especially in light of the fact that his subject was a man who was so ubiquitous in rock and yet unheralded, ridiculously so. Thirty years on, the myopic Rock & Rock Hall of Fame still has not awarded this great man a spot in their not-so-hallowed halls.

Details in the Hopkins biography I didn't know:
1. Steve Marriott and Ronnie Lane of The Small Faces played on Bill Wyman's track "In Another Land" on the Satanic Majesties Request album.
2. Clem Cattini played substitute drums for The Kinks and The Who when Mick Avory and Keith Moon fell ill.
3. John Paul Jones of Led Zeppelin composed and conducted the string arrangement on The Rolling Stones' "She's A Rainbow". 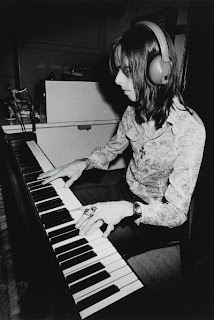