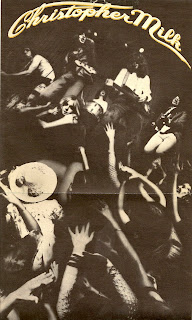 If there was ever a footnote in music history that was as large as an elephant it would probably be Christopher Milk. A band that never really attained stardom, much less major attention, they were still deep in the pocket of the glam scene in Los Angeles in the early Seventies.

Christopher Milk was largely the invention of John Mendelssohn, notorious critic for Rolling Stone Magazine, the Los Angeles Times, and Creem Magazine. He gained a good deal of his notoriety by panning bad hippie bands like Led Zeppelin at a time these bombastic, over-indulgent monsters were at the peak of their popularity. Regardless of whether these bands sold out arenas or not, Mendelssohn, representing L.A.’s largest newspaper, would tell us these bands were bunk. You could call it punk journalism before there was a name for it. It was debatable as to who garnered more hate mail, him or Lester Bangs.

John Mendelssohn’s love of all things mod and freakbeat wasn’t a solitary passion. If anything, there was a quiet explosion of people and bands from the West Los Angeles area at the time who were rabid followers. In 1971-1972 there was the Mael Brothers, who formed Halfnelson, eventually Sparks, rock critic Harold Bronson, co-founder of Rhino Records located down the street from the UCLA campus and other mod misfits in addition to the Christopher Milk project.

All these maniacs embraced bands like The Move, The Yardbirds, pre-“Tommy” era The Who, The Kinks, Bonzo Dog Band, Small Faces, Hollies, Procol Harum, pre-Ziggy David Bowie, solo Syd Barrett and a host of others. It was an exciting antidote to the Jethro Tull-Blood Sweat & Tears mind rot that was happening at the time. 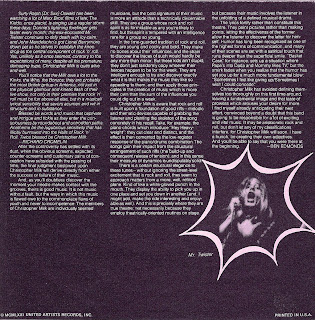 Mendelssohn often wrote in Phonograph Record Magazine about his band Christopher Milk, announcing a 7” EP release on United Artists Records, with a gatefold cover and lyric sheet, no less. It was available only through mail order. I think the whole thing cost $1.00, so I jumped at the opportunity to score this puppy.

When I got the record I was pleasantly surprised. The songs were cool and the band played pretty well, especially on songs like “Basket Case”, “Just A Cop”, a sort of gay “X-Offender” (“…to you he’s just a cop but to me he’s Mister Right”), the sublime “Hey Heavyweight”, and one of my favorite titles ever, “There’s A Broken Heart For Every Rock & Roll Star On Laurel Canyon Boulevard”.

A few months later I was watching my favorite teen beat cable access show (KDOC-TV Anaheim) and who should be lip-syncing to their new record but Christopher Milk! Surly Ralph Oswald the guitarist played piano and sang “There’s A Broken Heart” and John handled vocals on “Hey Heavyweight”. I was thrilled to see them on TV right after The Little Rascals (hosted by Stymie Beard!).

John kept writing reviews and not much was heard from the band for awhile until the Fall of 1972, when a new album was released on Reprise Records titled “Some People Will Drink Anything”. The cover looked cheaper than the UA release and the songs were more eclectic, including a Bonzo Dog-influenced cover of “The Locomotion”, a Procol Harum sounding tune called “In Search of R. Crumb” among others.

The album wasn’t really bad but it was so derivative it was almost a game of “Play The Influences”. It seemed kind of disappointing especially since bands like Halfnelson, Roxy Music and Lou Reed’s “Transformer” were all coming out at the same time. It sounded aimless pitted against everyone else. Too bad. 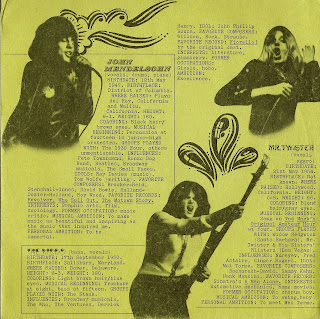 The album, like the band, faded into the ozone. My next run-in with the band in some form was 4 years later when I bought a microphone advertised in The Recycler and the man selling it was C. Milk drummer G. Whiz. He was living in some communal hippie house right by The Hollywood Bowl. When I mentioned Christopher Milk he seemed polite but uncomfortable. The impresssion I got was that the band just sort of fizzled out. But John sure as hell didn't.

A year later (1977) my friend Rich D'Andrea told me he was playing bass in a band called The Pits fronted by John Mendelssohn. I said, "WHAT???? He's got a new band? When are you guys playing?"
Well, they were doing a show at The Starwood and I got on the guest list and John was back to crooning great songs, no Christopher Milk stuff but new tunes like "Hollywood Can Be Cruel" and "You're The Pits".

The Pits maintained a C. Milk-type mod sound but with an aggressive metallic approach, very much like another new band that had just played The Starwood, Cheap Trick. They even opened with the ultra-heavy "Hello Susie" by The Move. I thought The Pits were terrific.

The Pits didn't really last long after a handful of shows - Rich left to play with Gary Valentine & The Know, etc. Wherever John may be I hope he knows that he produced some fun records and bands that may not have been genius but were at the very most solid entertainment. That counts for a lot in my book, and it would be great to see the complete Christopher Milk recordings re-released on CD sometime soon. 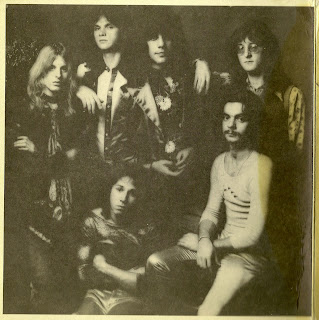 I too jumped at the chance to order the UA C-Milk EP when I saw the offer in Phonograph Record. I still dig it out from time-to-time & it still holds up.

Your description of the LP is spot on & I pretty much reacted to it in the same way.

There was a final Reprise single. A straight-forward version of Terry Reid's "Speak Now Or Forever Hold Your Peace" on one side, backed by a Bonzo-worthy parodic take on the Beatles' "I Wanna Hold Your Hand" (which made such an impression on me that my mid-70's proto-punk band, the Nervebreakers covered & aped the Christopher Milk spirit of the tune.)

Thanks for the remembrance.

You're welcome Tex, I enjoyed reminiscing about those strange times.

The freakbeat glam scene in West LA in the early Seventies was a bizarre phenomenon that never got attention, oddly enough.

I have to listen to this band. You got my interest.
Thank you for always sharing cool info, even when you talk about yourself the focus is always on the event. That is so refreshing.

Secondly, there's more CMilk photos than you can shake a stick at plus comments galore by band members at the Facebook Christopher Milk Fan Club page. This began as a joke by a group member's wife but somehow the forum took on a life of its own with assorted major periodical editors and writers checking in every so oft.

Wel, there you have it, all the Christopher Milk info you'd ever want to read thanks to Facebook.

just got Some People Will Drink Anything on vinyl at Reckless Chicago. Not bad, compares well to Artful Dodger, Crabby Appleton, etc. Too bad Smart Alex has such silly vocals. Pezband, Off Broadway USA are still unsurpassed!

Thanks for this post, and the comments. I read this while listening to Some People Will Drink Anything, which I picked up from Safe as Milk Records. Thans for the context, the memories...

What a smal world, I play the music of T. Tex Edwards on my show (love his version of "Lee Harvey", second only to Laura Cantrell's for me) and has his mate from Nervebreakers on for an interview last year:
http://archive.org/details/NervebreakersOnOutsightRadioHours

I will be playing some CM and Nervebreakers on my show tomorrow (http://www.radiogetswild.com/; 3pm-5pm Eastern) to work in what I gleaned from this thread.

Thanks for the feedback. I also understand that C Milk released a 45 of Terry Reid's song Speak Now Or Forever Hold Your Peace years before Cheap Trick ran with it. Haven't heard it but a few copies can be found for sale on eBay.

I bought the Christopher Milk album when it appeared in 1972 and I have loved it ever since. When I first got set up with my computer so I could record and digitize my lps (and assorted cassettes), SOME PEOPLE WILL DRINK ANYTHING was one of the first albums I moved from vinyl to my iTunes library. I never saw or heard any previous or subsequent Christopher Milk records, so I can't compare their worth to the album or vice versa...I just know I love that album. (I did in recent years find DYNAMITE on Youtube, so I recorded that and added it to my C. Milk playlist in iTunes.)

John Mendelssohn is very flattered by anyone's interest in his old bands, and would adore it if you found any of his new music of note too. Here's a sample, from my 2010 album Sorry We're Open: http://www.youtube.com/watch?v=mx3J99sR63c.

I am touched by your interest in my old bands. It would delight me no end if you listened to my more recent work, such as http://www.youtube.com/watch?v=mx3J99sR63c.

Well, its been a long time since the 1976 Starwood "rehearsal", but nice to know someone is silly enough to keep the candle burning. PeeWee passed a while back, John married well and is in England, and I am now a widower in Boulder Colorado. TK cannot leave Hollywood. Our short journey was terrific fun, and I think we did a couple of good tunes. Thanks to all who have liked them.