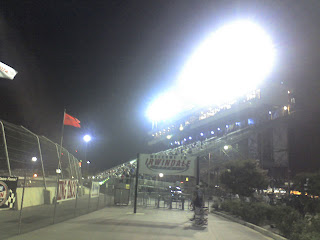 It’s Saturday Night and yeah! I could sip cocktails at the snooty Burgundy Room just like everyone else, but I couldn’t help hearing the sexy siren wail to go where the burning rubber and stinky motor oil hits the asphalt…the speedway!

Irwindale has a pretty iffy reputation, let’s be honest, it’s just okay and isn’t as awesome as it could be. The track seems small and the concession stand blows and motocross at Angel Stadium pulls in hotter chicks and this mascot called Lug Nut looks like a lame cartoon bastard whose ass oughtta get kicked because during the best parts of the race he struts around the bleachers tossing ugly raceway t-shirts while you’re trying to focus on the race…but there’s still some entertainment value here.

In the Men’s Room there was the Vomiting Guy, busting out a proud Viking warrior yell before blasting out chunks. Every ten seconds he ripped out another Battle Cry before he yakked. All of us guys laughed quite heartily at this man’s digestive distress. It’s tough peeing a straight line while you’re laughing. Bless you, Vomiting Guy.

When I wasn’t staring at the aging hipsters with their gray manicured beards trying to act cool I watched the King Taco Super Trucks, hopped up pickup trucks popping gears like the white trash chariots that they were. But there's more: Super Stocks ripping your ears out and chuffing smoke all over the place, and USAC Midget cars, little nubbin’ suppository racers that spun out of control every ten seconds (Lame! What’s the point?). I enjoyed watching the Flag Man change flags and give finger signals to the racers like a maestro conducting his orchestra.

I’ll probably go back to Irwindale on Demolition Derby Night but Air Guitar Man has to be there. There’s nothing more fun than watching a car wreck on the track and in the stands.

I want to go with you