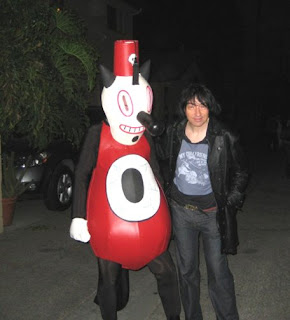 Gary Baseman’s wild new book “Dying of Thirst” was recently released, and to celebrate its publication his work was on display at the Corey Helford Gallery under the title “La Noche De La Fusion”. The Saturday night opening was high concept, a Brasilian style carnaval with a mambo band, fire-eaters, and Baseman critters in outfits a la Disneyland, some cartoony and some sexy. Rebecca was instrumental in designing and fabricating outfits for the show. 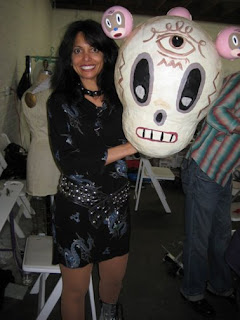 Three spaces were used at the opening: the gallery itself for the display of his paintings, the parking lot where the carnaval took place, and a little warehouse on the other end of the block where the Baseman critters put on their outfits, and in the case of the sexy critters also had hair and make-up done. 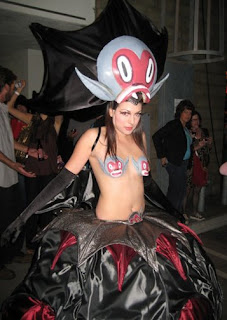 The turn-out was huge, and from what I understand was Facebook RSVP only or some crap like that. Since I don’t belong to Facebook I got in via my “plus one” with Rebecca, but just barely. The guest list I was supposed to be on didn’t have me on there, and had to call Rebecca to get me in. The security guards were way over the top, insufferably so; in fact, there were even guards regulating how many people could go up to the balcony to look at paintings. I think the gallery took themselves way too seriously, to the point of placing a slight damper on the fun of the proceedings. 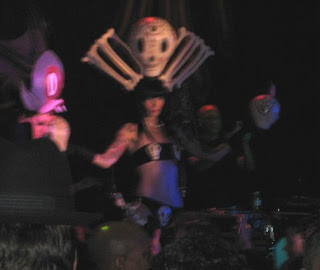 I had a good time at the opening but silently thanked God that these things don’t happen very often. I think Baseman’s a cool artist and his critters are fun to look at but by the end of the night I kind of wondered what Robert Williams would have done with the same budget. 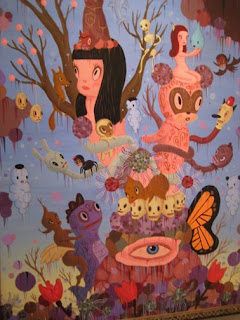 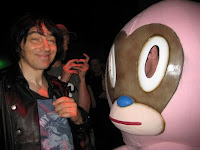 Hey, it looks like you kids had a terrific time at the Baseman show.

It would have been more fun if I flasked it! The bar was backed up and all that was sold was 99 cent store wine. :(