"My Car Is My Lover" (BBC America) 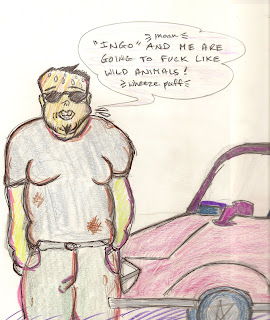 The greatest show on television is the weekly BBC America documentaries with episodes like “England’s Ugliest Teeth” or “Too Fat To Toddle”, showcasing morbidly obese children under four years of age. But the pinnacle of gross sensationalism aired a few weeks ago in an episode called, “My Car Is My Lover”. Folks, I think we hit the motherlode of sleaze. Forget about NamBLA, step aside for the new sexual perversion, mechaphilia. We’re talking guys sticking it where the gas pump don’t shine, that’s right, dudes gettin’ wet, hard and sloppy over automobiles. It’s all about the Volvos, not vulvas.

The show documents the cross-country odyssey of two car lovin’ hepcats, one: a fiftysomething ghoul from Washington State named Edward who writes love songs to his VW Bug named “Vanilla”. One tune in particular is called “For My Love Bug”, where he lustfully croons about the sexy curves on her fender and hood and goes something like:

Pamela Anderson would be no match to this old flivver in his household.

Then there’s the younger dude from Missouri named Jordan who works at Wal-Mart in the dairy section stocking milk all day and writing death metal tunes on his ProTools all night. He’s in love with his VW Bug named “Ingo” but has another lover on the side, a black Knightrider-type auto called “Todd”. Not only is he a two-timer but that also makes him bisexual!

For the next hour we see Edward wiping his pubic hairs off “Vanilla” the morning after a session with her. He hits the happy highway soon after, occasionally distracted by a Porsche Targa on the freeway the way a regular guy gets distracted by a chick with a killer rack or sexy legs: “Holy cow, check out those tailpipes! They represent the car’s anus. You just feel like exploding with love, greasing it up, and letting yourself go!”

And “exploding with love” he does, raping the film crew’s car while they’re not looking, leaving puddles of his spunky man-juice right by the left fender. The film crew thoughtfully filmed the residue for our morbid entertainment. Cheers, lads!

A little red Pinto gets a similar appraisal. “Ohh! Rumble, rumble, honey. I’d lick it. I’d come all over her.” Meanwhile, Jordan confesses that girls don’t do it for him like a primed Chevy, and pulls over quickly to the curb in the middle of New Mexico to call in sick at his job at Wal-Mart in Missouri. “Uh, I won’t be back for a couple of weeks. Can we talk about my coming back to work when I return?” Big surprise: his boss hung up on him.

After interminable shots of the boys racing down the American desert highways to weepy Dire Straits guitar ("Sultans of Swing"), Edward and Jordan finally meet at a Motel 6 in Hollywood and spend more time drooling over each other’s cars than they do bonding and yukking it up. After Jordan goes to bed an ultraviolet Night Vision camera pointed at the parking lot catches Edward stealthily sneaking out and fucking “Todd”.

The climax of the show (in more ways than one) is a swap meet in Pomona, where scores of beautiful vintage cars get shown off. This is the equivalent to the Foxy Lady strip club for these boys. These guys put the “stud” in Studebaker. Edward trots around the car lot with a tent in his pants fondling tail fins, and sneaks kisses and licks moaning ecstatically while low-riders walk by laughing at him.

Meanwhile Jordan verbally letches over an old Ford, smacking his lips like a frat boy at a bachelor party, reporting that “A lot of these cars I would rape like a wild animal. I would take this car home and rape it silly. Boy, when I get home, me and Ingo are going to make some sweet, sweet lovin’.” Jordan, you beast! With all the talk of car rape floating around I don’t know whether to call Gloria Allred or Henry Ford.
Posted by Andy 7 at 7:59 PM

Where do they find these people.

I have the feeling your description is better than watching the show.

Now I'm going to throw up.

Haha.
Just saw this show the other day.