When The Devil Rides 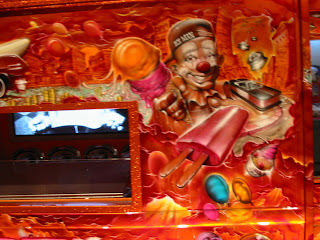 The bus drivers are drunk as fuck and they don’t care.

Before I raised enough scratch to buy a car I had to take the bus on Christmas Day. After waiting an eternity for the bus to show up, I ascended the steps to be stared down by the driver, who silently mouthed “fuck you” at me. I may not have heard it, but I sure as Sam smelled it: the fumes rushed at me like a Johnny Walker fart cloud punching me in the face. The driver did this to just about everyone who boarded.

And how about the driving? Narrowly side-swiping parked cars, running two red lights and braking on a dime to avoid the third raced light sending us flying out of our seats! The ABM (Angry Black Man) in the back yelled, “Yo! Quit bullshittin’ aroun’ man!”
The bus driver glared in his rear view mirror at this remark. In defiance the ABM lit a Kool cigarette.
The driver turned around and shouted, “There will be no smoking in the coach!” (English translation: “If I can’t smoke, you can’t.”)

All this would be screamingly funny if it was out of a Bukowski novel, America’s most lovably zany alcoholic, but no, when the devil rides and you’re in the “coach”: Run, Motherfucker, Run.

New Year’s Day was almost as bad: our driver was pissed he had to work on New Year’s and dealt with it by snubbing the riders.

“Sir, how many stops until Sherbourne?”
Silence from the driver.
“Uh, sir?”
Dead silence.
“Sir, could you tell me-“
“SHERBOURNE, NEXT STOP, COMING UP!” he finally yelled.

I think you know where I’m going with this. I don’t know of any other service industry that shows more contempt to their customers on the holidays as the Bus Co. To which I offer this: the next time these guys go on strike, pull up to the picket line, put your car in PARK, and rev your engine up, over and over, and then step on it. Let the smoke choke them and the revving noise blast out their protests. They won’t mind, they’ll be dead drunk.
Posted by Andy 7 at 5:41 PM