Stuff I Burned From TCM, Part 5 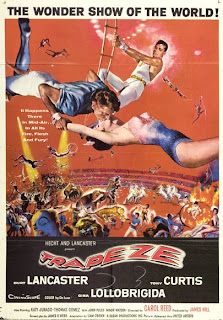 In the past I’ve written about movies that haven’t seen the light of day on DVD. Some films featured high-ticket stars (i.e., Manpower, Bordertown) and some obscure stars (i.e. The Man With My Face, The Fox), but this time I’m going to list a few films that star immortal film icons and still haven’t been released. With DVDs being on the market for over 15 years you would think everything starring these movie stars would have been available by now.

Rancho Notorious (1952): Directed by Fritz Lang, starring Marlene Dietrich, Mel Ferrer and tons of great character actors, this gorgeous Technicolor action film is about a vindictive husband seeking murder and revenge for his wife’s brutal death at an outlaw ranch named Chuck-A-Luck. There’s tons of whiskey drinking, barroom brawls and pistol toting. William Frawley is on hand to do his grumpy Fred Mertz routine but the show stopper is George “Superman” Reeves playing a scar-faced womanizer!

Trapeze (1956): Burt Lancaster and Tony Curtis flying around a circus trapeze in tights barely covering their bulges and this movie isn’t available on DVD? Surely, you jest, madame. This ain’t no Walt Disney family circus extravaganza, either: Our two heroes compete for being the first team to accomplish a triple somersault mid-air but may never attain the honor with Gina Lollobrigida standing in the middle breasts-first and playing both guys at the same time. This one’s just dripping with sex!

Johnny Guitar (1954): Joan Crawford, surly noir thug Sterling Hayden, Ernest Borgnine, John Carradine in a movie directed by Nicholas Ray about an ex-saloon girl now butchified who hires her guitar playing ex-boyfriend to protect her gambling hall from a barn burning harpy (even more butch than her!). This one’s just brimming with hidden lesbian rage! And by the way, of the four films listed above, three of them are westerns, but very hip, ultra-modern ones. Which begs the question: is the Western movie the Red Headed Stepchild of the cinema?
Posted by Andy 7 at 6:40 PM

All these movies are my faves but I love Saratoga Trunk the most must be Cupidon. He even had his own theme song
Johnny Guitar is hysterical the broads were pretty butch.