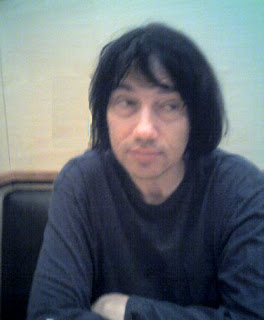 Sometimes things start out loud and simply stay that way. I jumped out of bed to take two early morning phone calls, both temp assignments: One from an agency that only called me once in the past, now offering me a $6 clerical gig in Inglewood. The next one was from an agency that told me I would never work from them again, offering me $6.50 in the USC area, and since it was short notice they’d up my pay to $7.50 an hour. I passed on both. Walking out of the pisspot in my long johns my roommate Thom raced in, excited, “They’re looting the Silo!”
“What the fuck! Why?”
“I got a great set of silverware in the case. I’m going back and copping me a widescreen. Revolution in the streets!” He pumped his right fist, the one he probably masturbated with.
“Have fun. I don’t steal shit”, I burped. Silo was an electronics store on the corner of Sunset and La Brea that went out of business six months after this, uh, looting. (We lived on La Brea and Franklin).
I heard helicopters above me and sirens all over the place. I turned on the TV to see if my cartoons were on. The first thing I saw was a grainy, dark videotape of seven policemen beating on a prone black guy with billy clubs. Then they showed some white guy getting pulled out of his truck in the middle of the street and two black guys bashing him upside his head with a cement block and dancing victoriously.
“Okay”, I groaned, “that explains the job offers. Well, fuckity fuck.”

As I walked down the road to the Korean-owned donut shop a car full of Hollywood gangstas gave me the Tupac Shakur evil eye, and they were procrastinatin’ beating Whitey until some fat illegals threw a rock at their car. “Hey, Puff Daddys get your black asses the fuck out of our hood, motherfuck”. The posey gangstas freaked and sped off.
The lady behind the counter at Yum-Yum Donuts was nervous as a wet cat. “You orda fast, we close soon”, she advised. Her husband duct-taped wooden boards over the windows.
“I’d like an apple fritter and a coffee”. She threw an apple fritter and added a fudge buttermilk and a lemon powdered jelly donut, too.
“You take extra, close your door and lock it. Too dangerous to be out!” She looked like she was ready to cry. The dry cleaners, Korean-owned next to her had the front window caved in and vandalized.
When I got back home there was a message on my answering machine. “Hey, Andy, you may not remember me but I’m only like one of your biggest fans, you know, Debra Sue, and um, we’re here in funky Silver Lake having a Rodney King barbecue at The Miracle Workers' house. Why don’t you swing by? Call me!!!” Well, somebody was having fun.

As I heard umpteen sirens howling past my street and more helicopters shooting spotlights into my window, my hand shook as I ate my jelly powdered donut, jelly spurting on my pants and white powdered sugar flaking all over the carpet. “Shit”, I mumbled, “Thom’s gonna freak when he sees the mess I’m making. Well, serves him right for accusing me of stealing his stupid Germs cassette”. I hate The Germs. I called Jim, my guitarist, who lived three blocks away.
“Jim, I’m a nervous wreck. What are you doing?”
“I’m having a few beers with John – come on over – we have tons of food, we’ll feast like kings while Hollywood burns”. Jim paused to take a drag from his cancer stick.
“Just like Emperor Nero”, I fidgeted.
“Bring your saxophone! Hit the buzzer three times so I’ll know it’s you!” He lived in a security apartment building.

Jim and John weren’t hard to find. They were the apartment with the loudest music. My record, played full blast: “Everybody’s gonna fall, everything must go”, I sang like an excommunicated prophet over the PA. “GRAB A BEER!” Jim hoisted a frosty in the air. Jim and John were camped out on the 4th floor balcony, watching the helicopters flying over the sky and smoke billowing out every few miles from store torching.
“Hey dude, what’s up?” John greeted with a half-pint of Jack in his paw.
“Look at all those fires! The city’s gone crazy!” I marveled at the landscape.
“The girls are coming over. Did you bring your swimming trunks?”
“No, I brought my saxophone.”
“You can borrow my shorts, we’ve got the whole swimming pool to ourselves”, Jim chortled. “Everybody’s gone, they all bailed.”
“Gross, I’m not wearing your shorts.”
“I just washed ‘em last week…I think”, he thoughtfully puffed on his American Indian Light.

Well, the girls came over and we had a dance contest. “Let’s see who dances the best to our songs!” Jim said, hoisting a stained coffee cup, not far from his beer.
“I’ll make burritos!” a girl chirped in the background.
He put on our record, “Silver Surfer”, my voice booming out of the speakers: “I am the Silver Surfer, sky rider of the spaceways”…
The TV was on with the sound turned off, images of angry Korean store owners on the rooftop of their stores, rifles in their hands looking around to “contain” any hooliganism.
“I am the Silver Surfer, sentinel of the cosmic waves…”
The girls danced ferociously, shrieking, and banging their heads faster and faster. The TV now showed SUV trucks slamming into store windows, illegal aliens running out of liquor stores in droves with 12-packs of beer and baby diapers.
‘…I’m ready for the zero hour, I’ve got the power in a meteor shower, ooooh!”
The TV cut to gas stations exploding from Molotov cocktails hurled from SUV’s...then cut to National Guard tanks rolling down Wilshire to the Masonic Temple with gun turrets set up.

I kept my clothes on by the swimming pool, lying on a chaise lounge and seeing the sky get darker and darker with smoke while everyone drunkenly swam in the pool. I passed out from drink, and three hours later the girls and John were gone. Lucas my bass player was now there with Jim, smoking and drinking. Jim was in debate mode now, “The only way the LAPD can save face is if they fired Darryl Gates and hire a black police chief in his place!”
“They’ll never do that, Jim”, Lucas laughed. “Get real”.

A week later the curfew was lifted all over Los Angeles and Jim was sick of looking at my face, me likewise. I trundled off back home. The devastation was bad – my favorite supermarket (The Boys on 6th and Vermont in Koreatown) was destroyed, the one where every minority shopped and got along with each other. Things got back to normal, in some areas at least. We played a show in South Los Angeles with a band from New York called Cop Shoot Cop. After the Rodney King riots the last thing a band should do is drive around a black neighborhood with amplifiers and souvenir t-shirts screaming “Cop Shoot Cop”. They told us during soundcheck about the cops pulling them in for questioning. You could see the fear in these hard-boiled New York faces, heh, as they told us this story. “Well, welcome to Los Angeles, Cop Shoot Cop”, I laughed, “Now go back to New York where it’s safe and normal”.

Post-Script: 2 years later we had the Northridge Earthquake and OJ Simpson. Many of my friends left town soon after. I also broke up my band. Things were never the same again.
Posted by Andy 7 at 11:50 AM

You reminded me how creepy and surreal that time was. I saw tanks in my hood.
Perfect post timing for Martin Luther King's birthday. Write more!