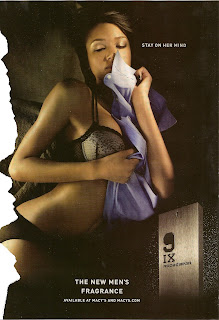 As a subscriber to GQ Magazine I can tell you that I don't need to be told Puff Daddy is the epitome of fashion. I KNOW I dress better than that circus monkey even on a bad day. But GQ has a terrific feature especially around Christmas time, and that's tons of ***COLOGNE ADS*** within the pages of their august periodical. Those slices of slick Paper Heaven with their scratch and sniff goodness really sends me, and I'm here to pass my expert opinion on what stinks real good and what just plain stinks! Contained herein is my appraisal of ads torn off the recent issues of GQ Magazine:

L'Homme (Yves Saint Laurent): This was a slam dunk. The minute I smelled this light, fruity aroma I was hooked. Pricey but worth it, it smells of class and sex, just like a lot of YSL products. Even after death Yves still has it!

Versace Pour Homme: Kind of a lazy lemon-lime mixed with crotch (fish) odor. If you're the kind of girl who likes to lick Sprite off your boyfriend's dick this one's a sale and a half.

Boss Pure (Hugo Boss): The ad shows a picture of a dude power diving, and the name of the fragrance is Pure, so just imagine...it smells kinda like man-sweat, with a very weak citric base odor. Pass!

Prada Infusion D'Homme: Available in Eau De Toilette, Shower Gel and After Shave, it smells like clean soap mixed with lime. I have spray cans of Glade that had more allure than this. Prada don't have game because they spend more time making sexy clothes for chicks. Hey Prada, guys is people too!

Polo (Ralph Lauren, duh!): Ultra-mega Meh! Ralph's been rockin' the Polo line for 15 years now and it's time to shoot that ol' horse in the head. Chaps was better, way better. He's advertising two lines now, Polo Black and Polo Double Black. The great irony is that it smells like vanilla, which is as white as it gets! What an idiot. Get back on your horse, Ralph.

Acqua Di Gio (Giorgio Armani): The ad shows yet another Italian bottom looking intense. This one was good, a little chemical-like, but I'd buy it.

Dolce & Gabbana The One: Chronic pothead Matthew McConaghey models the ad for D&G. Blaze another fatty, Matty! This one was blander than that bomb he shot with Goldie Hawn's daughter.

Perry Ellis: Beautiful bottle and it smelled of sex, like my lithe body was laying naked in silk sheets expecting to rob some winsome maiden of her precious, uh...sorry, I was getting carried away there. Which is exactly what a good fragrance should do. I think I'll buy their "body shampoo" and dream of ravishing a mermaid.

9 IX (Roca Wear): Greatest ad ever: a hot black girl in lingerie lies in bed dreamily embracing her man's dress shirt while he's out. I think my wife does that while I'm at work (tee hee). The ad's the best thing about it. The smell is weak and forgettable, just like Jay Z (the founder of RocaWear) music. If that hot chocolate cookie's sniffing a shirt it's probably got that foxy Perry Ellis scent.

So there you have it: all the stink that's fit to print. I wish the internet had a scratch and sniff option. Wouldn't that be great? I wonder what Facebook would smell like?
Posted by Andy 7 at 6:19 AM

This is hysterical.
Who needs scratch and sniff when you can nail the scent with words.
Man sweat with weak citrus odor.... hahahahaha