Bicentennial Summer With The Sex Pistols 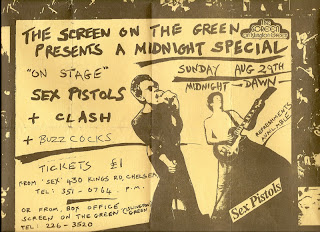 When Bicentennial Summer (July 4, 1976) was just around the corner everybody was unfurling their flags and fireworks, but I was reading about fireworks far, far away. A band in England called The Sex Pistols who looked like four Richard Hells were screaming at apathetic rock fans all over their country and raising hell. During an era when bands basically pissed on their audience with a snobby holier-than-thou attitude it was refreshing to hear kids in England saying fuck you to bands like The Eagles, Yes and Led Zeppelin. Even the pompous pussies in New York like Lou Reed, Television and The Talking Heads thought their shit didn’t stink. I was going to celebrate America’s 200th birthday by going to Europe.

After visiting obnoxious cities like Amsterdam, with their smelly hippies smoking their smellier dope, the French Riviera, where they still have Hitler’s sperm on their lips, and Venice, the world’s biggest church yard, I was ready for the angriest band in England. My first show was at a movie theatre that began at midnight and was going to go all through the night. Tickets were only one pound ($2.50) and the opening acts for The Sex Pistols were The Buzzcocks and The Clash. All I’ll say about The Buzzcocks was that Pete Shelley had the crankiest guitar sound and Howard Devoto reminded me of Frank Gorshin (The Riddler). All I’ll say about The Clash was that they looked like five G.I. Joes on stage. (Keith Levene was the third guitarist).

Intermission consisted of watching endless Kenneth Anger film loops between bands and glitter records played over the PA. Since the first punk rock record (“New Rose” by The Damned) wouldn’t be released for another few months glitter records like Roxy Music, Gary Glitter and Mud played while Siouxsie Sioux danced topless on stage. (FYI: I’ve seen farm animals with better knockers). Billy Idol at the time wore vintage suits with little Ray-Ban sunglasses poking through his short black hair, and enjoyed shoving people at the slightest provocation. (20 years later I saw him at a book release party with a beer belly and a slobby Star Trek t-shirt on. Ha!)

The movie theater was packed with fans but irony of ironies, a show that begins at midnight after two great openers and Siouxsie Sioux half-naked (“Peek-A-Boo” indeed) leaves Johnny Rotten and yobs on stage for show time by 4 a.m. It would be fair to say half the audience was already crashed out in their seats in a Punk Slumberland! They opened up with “Anarchy In The U.K.” flashpots exploding and Johnny so excited to be let loose he knocked the cap off his front tooth with his microphone. After the song was over Johnny sent Nils The Roadie (future Banshees manager) over to the front of the stage to search for his cap. This delayed their "concert" by about ten minutes but it was funny watching Rotten cuss Nils The Roadie out.

Next song was “Liar”, a blatant rip-off the NY Dolls’ “Puss N Boots”, and after many more songs and taunts from Johnny Rotten they left the stage, only to return for a barely asked for encore of “No Fun” (“You didn’t ask us back but we’re going to play anyway”). Fans were getting woken up and kicked out of the theatre by the ushers. I walked back to my hotel room as the sun rose, dawn's early light shining on British garbage cans.

A week later I saw the boys play The 100 Club and met Malcolm MacLaren who gave me a cool press-kit (pictured below) and also met his then girlfriend, Vivienne Westwood. She designed clothes for their store in Chelsea, “SEX”. Malcolm introduced me to drummer Paul Cook and guitarist Steve Jones (“Jonesey’s Jukebox”), great guys, down to earth, fuck yeah.

The day after the show I went to “SEX” and bought a rubber t-shirt and a leather t-shirt, as well. The rubber t-shirt lasted about two years because I didn’t keep it in a refrigerator, so it ended up melting! The leather t-shirt I eventually gave to a Scotsman named Owen. I still have photographs of myself modeling them. It was actually a great week in London; I can understand why several of my American friends moved there. Music and fashion is more important there than television.

It was exciting watching The Sex Pistols early on because they hadn’t made a record yet and Sid Vicious was still in the audience (I eventually met him a year later and he did me and my friend a big favor; he was a lot of fun). And, of course, Malcolm hadn’t yet become the big thief he turned into, stealing from The Pistols and my band***Arthur J. And The Gold Cups, we did punk covers of old standards. When Malcolm was in town during the infamous Winterland show (Jan 1978) he saw us play, and surprise, soon after put out “The Great Rock ‘N Roll Swindle”, an album of punk versions of old standards. Thanks for the steal. No, he didn’t remember me. I didn’t expect him to. Fame makes a fellow nearsighted, don’t you know? 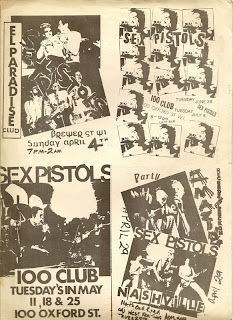 Why are you so cool? And hilarious.

Thanks - I had a lot of fun writing it!