Micro Cars Are The Shizzly 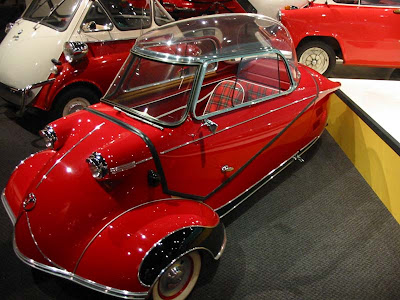 Now that Hollywood and the movie industry are deader than Kurt Cobain I’ve been hitting the museum and gallery scene big time, and what a find this week! Petersen Auto Museum has a fantabulous show running now on Micro Cars, international miniature cars through the decades. If you thought Austin Mini Coopers were the only kinds out there, get ready for an edjimication that’s fun and foxy.

Some of the makers of Micro Cars through the years include Messerschmidt (pictured above) who made the post-war transition from building fighter planes to micro cars. Check out the plane cockpit cone on that baby. Astounding shit. Another auto maker that made these tiny wonders was a refrigerator company that used the same door for their cars as their fridges. The car (seen behind the Messerschmidt) looked like a moving fridge. The show had me clicking my camera away like a Tokyo Tourist, snapshotting away like a Polaroid Swinger with midget cars instead of nude couples.

There were no Micro Car books for sale at the souvenir shop but there were a few fan magazines for the collectors. The average used car for sale in the mag went for about $5000, typical used car prices, but bear in mind the maximum speed these cars can go is at 55-65 MPH. They're in no way built for high octane thrills.

Other shows at the Petersen was an alternative energy car show which had some lame “flying car” from the 50’s that looked like a speedboat with wheels. It was very shallow and had no seat belts. Imagine that baby hitting the friendly skies while your buds drop out of the sky every time you bank a turn!

There was also a killer low rider car show. I was impressed and I hate low riders and their culture, but, damn these cars kicked my Anglo ass. One had Aztec pyramid seats with shot glass drink holders – GENIUS! Buggs Ochoa is a wild maniac of an artist and is more deserving of your attention. Repeat after me – BUGGS OCHOA. 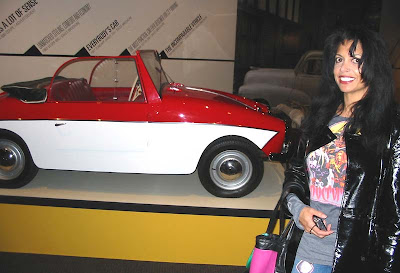