The Los Angeles County Museum of Art (LACMA) bored me when field tripping there in the 4th grade and to this day still bores me to death. Ancient pottery, coins and tapestry a good art museum do not make. As big city museums go, LACMA is a poor specimen – stack it next to the Art Institute of Chicago or the New York Museum of Modern Art and it looks pretty damn sad. There are only so many times you can trot out poor King Tut to boost ticket sales, so they went for the sensational this winter. They gave Salvador Dali a great show that combines his artwork with his movie work (not too much, but fascinating).

Dali masterpieces hung in several rooms with short films he collaborated on through the years (the show was titled “Painting and Film”). In addition to the inevitable shorts “Un Chien Andalou” and “La Age D’or” there was a computerized reproduction of a Walt Disney-commissioned work called “Destino” which looked a little tampered, if you ask me. The heroine shown in the clip looked a little too much like Pocahantas!

The room which knocked me out was the “Spellbound” room. The Gregory Peck dream sequence Dali directed for the Hitchcock classic played on a large screen (still shown above). Instead of storyboarding it he painted variations on the sequence in various works displayed throughout the room. The best part was the original back drop from the dream sequence occupied one wall of the room. I kept turning my head from the movie to the backdrop and then back again to the movie. It was positively surreal!

Other highlights: Discovering how small “The Persistence of Memory” is. It must have been 16 x 20”, maybe smaller. And any guy who paints giraffes on fire is a genius.

While you’re at LACMA go upstairs and discover an amazing artist from Germany named Ludwig Meidner (sample painting shown below). In 1912 he painted a series of Expressionist works that depict Berlin on fire and people dying in the streets. Imagine a man who pictorially predicted World War I and the fall of the German empire two years in advance. Some of the eeriest art I’ve ever seen. LACMA almost redeemed itself on Meidner alone. 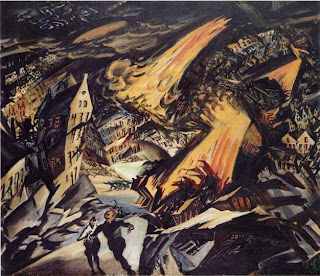