Hungry For A Real Fine Guy Like Me: Marklindsay.com 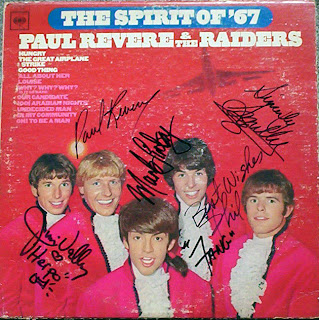 Eight years ago I bought all the Paul Revere & The Raiders CDs reissued on Sundazed Records, and they were brilliant. They rocked hard and looked like drunken Revolutionary War dudes that dumped all that tea into the Boston Harbor. Like many bands of their time they made the effortless transition from garage rock demons to psych golden gods. Great stuff, whether it was “Spirit of 67” or “Hard ‘N Heavy”. Of course, listening to the music wasn’t enough. I registered onto the Mark Lindsay website and the fun, just like Elvis, quickly left the building.

To call Mark Lindsay one of the most narcissistic, control freak rock singers of all time would do him a grave injustice. His controlling and rampant ego would turn Beyonce or David Lee Roth into paragons of modesty. After leaving his cheesy website it took me a year to listen to his records all over again, it was that bad. We’ll talk about Dave Clark from the Dave Clark Five later, that’s another horror story.

One of the first things you do at a website is log on to the Message Board so you can exchange your views on the Raiders with your fellow fans. Ohmygod, I was the only guy on the board and easily the only person under 40. Shit, what a nightmare. Picture if you will a bunch of angry Jesus Freak housewives from the corn belt who think that 16 Magazine is still in circulation with Sajid Khan and Donna Loren on the cover.
Half the threads were them daydreaming aloud about being alone with Mark Lindsay serenading them in various forms of dress and undress. The administrator to the website was Mrs. Mark Lindsay, and unlike most website admins was not terribly diplomatic. You could almost imagine her seething behind her computer monitor reading all these horny posts about her man nude singing “Hungry” or “Mr. Sun, Mr. Moon” to them.

Since I was an interloper (male) every post I typed was met with condescension, kind of like DVD Talk. After letting their guard down 3 months later they calmed down and warned me of certain rules: what you can’t discuss on the Mark Lindsay Chat Room, i.e. specific band members Mr. Lindsay hates (Harpo, Fang, Smitty, Joe Jr.). Apparently he hates Paul Revere too, but since he’s the fucking leader of the group there’s no turning around that corner.

One of the power moms posted, “Wow, it would be great if I could get a video of the Raiders on Happening ‘67”. I posted back, “Oh, I have a copy of an episode on video, send me your address and I’ll be happy to shoot a copy off to you”. Uh-oh!
I got an e-mail that night from Mrs. Lindsay: “You will never, EVER, discuss unauthorized material of the Raiders, for sale or for trade, on the board again or you will be removed from the site”. If Mark couldn’t make a dime off the video it was forbidden.

The man himself barely made an appearance at his own website, and when he did it was to post his incredibly exciting life:

“My brand new Jaguar purrs like a kitten. I looooove my fast cars!”

“Love my house in Kawauii. The koi pond rocks and after I’m done with my yoga I settle down for some fine dining!”

“Buy my new record on my vanity label. I sing all the old standards, just like Rod Stewart. I dedicate it to “Casablanca” and I’m dressed just like Bogie on the cover!” (Lindsay still wearing zany outfits 40 years later.)

There was hardly any recognition of his fans, just Mr. Wonderful occasionally popping in to tell the Wal-Mart witches that he was living a Hawaiian idyll they’ll never experience. What a dick.

What finally made me quit the board? Combined with Mark Lindsay’s arrogance and the Dragon Lady playing rock police, some desperately dumb housewife posted, “The reason so many Jews died in the concentration camps is because they didn’t accept Jesus as their Lord and savior”. As someone who’s lost countless relatives that died there I thought I was going to lose my mind. Nobody contested her idiotic statement. These people are fucking idiots, I thought, and I left the website, never to return.

And I’m sure Harpo, Fang, Smitty, and Joe Jr. were dying to ask me “What took you so long?”

POSTSCRIPT: Since I got off the site Lindsay has moved from his glamour pad in Hawaii to Portland, Oregon and got a job DJing on a radio show. Sounds like all the money ran out, ha! And the Menopause Message Board is gone, daddy, gone. Happy endings are the best.
Posted by Andy 7 at 5:55 AM

Mark Lindsay is my favorite rock singer, and I tried listening to his program every Saturday night about 2 years ago, when he was on the AM station in Portland. I tried the chat room also. I was way younger than the other chatters, and found that I had little in common with them. Several were very sensitive and objected to worthless "Chat" that I made. I quit listening to the program and definitely quit wasting any more Saturday evenings in the chat room.
I enjoyed reading your article and found much in common with it.

I once ran into mark lindsay at safeway grocery store in beverly hills in 1984. As a longtime fan I was hurt that he was such an asshole after I said how much I enjoyed his music growing up etc. He was a complete jerk. Then I watched him exit the store where he was double parked and he left in his vw rabbit. What a has been. I went home and told my boyfriend later that night. He helped me take all my raiders vinyl to the dumpster. No radio station in los angeles even plays raiders, not even krth. He must have pissed off a lot of folks in his day with his charming personality.
Recently I came across a cassette of one of his solo efforts and played it. In my younger infatuated days I didn't realize off horrible off key he sang as he butchered "the long and winding road". Yikes. It's in a landfill now.
But apparently he's still packing high school auditoriums on his moldy oldy tours.
Thanks for letting me vent. All he had to say was "thank you."
I bet he feels bad he's not paul mccartney stature.

I try to enjoy the records and videos and bypass the fact that he's a dreadful person. Ditto with The Dave Clark Five, too.