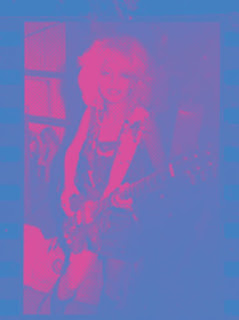 Nobody hits the streets of San Francisco expecting to knock 'em dead. If anything, if you go there it's to run away from somewhere else, and she was taking flight from French Canada, a chilly graveyard of smug and prim "rebels". She had dark skin of indeterminate race and platinum blonde hair. It shook up hipsters who swore they couldn't be shook up.

The locals didn't know what to make of her, but the drag queens did. They took her under their wing like the Seven Dwarves of Babylon: there was Miss Glamour Thing who had Tourette's Syndrome, "c'mere nigger bitch, get your pussy over here I'll show you how to sew a dress, whore". Sister Fred, who worshipped Boy George - "ker-azy about the Boy", he whined through his nose, and Jill Hershey Bar, inheritor of millions, at 300+ pounds and lover of scat, hence the title. The Girl once gave Miss Hershey Bar some dog shit for his birthday and he was so excited he broke out in tears.

Although she never had sex at all she was constantly in the employ of various sex industries - credit card checker for a 1-800 Phone Sex line or a custodian at a North Beach strip club. It paid for guitar strings, a fuzz-wah pedal, and rehearsal studio time. It was one night she got into the Nightbreak on Haight St. to see the Four Horsemen play. Sitting on the edge of the stage as the Four Horsemen played were two sluts with fried blonde hair kicking their legs up and down to the beat. They looked really smug like they were Sex In A Can. "How much more stupid can these bitches look?" she thought.

After a few beers she went to the ladies room. A minute later one of the fried blonde strumpets came in, too. The Girl turned around and sneered at her and said, "Plan on giving any diseases to the band after the show?"
"Fuck you, bitch", Fried Blondie yelled, and threw a punch at her. She ducked and missed the punch. She dived at her and ripped out clumps of the Fried Blonde's hair.
"I'll kill you!" the ugly stripper shrieked. The Girl tore the stripper's top off, and then got her on the ground using her wrestling medal-winning skills to good use.
"Let go of me!!" the stripper whined. The Girl then tried shoving the stripper's head into the toilet bowl. The stripper's friend came in to help her.
By this point there was such a commotion coming from the Ladies Room, the Girl's friends came in with beer pitchers and beat the strippers upside their heads with them.
The bouncers raced in and broke up the fight, kicking everyone out of the bathroom.

After the band's set, the lead singer of the Four Horsemen approached the Girl at the bar.
"Hey", he said, "I'm sorry about those girls. They followed us, I don't know who they are".
"Oh, that's okay", she said. He focused on a chip she wore around her neck.
"Cool", he remarked. "I'm in the program, too. How many days do you have?" He turned the chip around to read the inscription.
The inscription said, "GOOD FOR ONE DRINK".
He disgustedly pushed it back at her. But not so disgusted that he didn't give her his phone number in Hollywood before storming off.

Months later, she had a job cleaning at The Century Theatre. Two strippers came into the dressing room and froze when they saw her. It was the girls from the Nightbreak. As she was leaving, one of the strippers stopped her.
"I know you", she said. "I know you from somewhere. You look really familiar".
"Yeah", the Girl said, "You look really familiar to me, too".
"Do I know you from Hollywood?" she smiled, getting excited. "Did you ever go to the Scream?"
"Yeah, maybe. Have you ever been to White Trash A Go-Go?"
"No, no, no. Maybe the Seventh Veil", the fried stripper pondered, jogging her imited memory banks. She honestly couldn't place her from that explosive evening at the Nightbreak.
A week went by and the two strippers did their act, never recognizing the Girl. After their "engagement" was over at the club they left the Girl a large tip, and they just couldn't remember that night.

The Girl continued making clothes with the Seven Dwarves of Babylon and it worked out fine.
Posted by Andy 7 at 6:24 PM