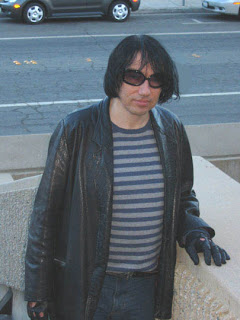 I forgot to put the bobby pin on my yarmulke, so the skull cap kept slipping off the back of my head again and again. I had to keep readjusting it on my head to keep it from falling off. I walked down Pico Boulevard doing this as the carnival of the damaged and depraved passed me by.

There was Mr. Exploded Eye, the Dog Lady, even old Moe Howard, decades away from Three Stooges fame. He’d hang out by the news stand and talk to the battered old vendor in his frail voice, a small, meek old guy with the spittoon haircut, all white now, too tired to throw a pie or poke a Shemp eye to save his life.

Mr. Exploded Eye had a severe case of conjunctivitis that was never treated, so he had one eye that protruded from his head like an enormous fried egg that exploded. He always wore a baggy suit with a crushed hat and looked like an old baggy pants comedian straight out of a burlesque show.

The Dog Lady was a gnomish woman of indeterminate age who always wore a heavy coat regardless of the weather. She continuously walked four mongrels on a leash. The dogs were so tired and inbred they didn’t resemble any identifiable breed to anyone.

Advancing towards the large intersection of Robertson Boulevard one could hear the shrill wail of Morey Branovan’s alto saxophone. Branovan was an insane little Jew with platinum blonde hair and a baby face who hated children and teenagers. And we hated him. He would play “Hatikvah” in an excruciatingly loud bray that sounded like a horse being tortured. In between notes he’d scream “HEY!” He’d wear a Hawaiian shirt with rotting old leis around his neck and have a sign in front of his sax stand that said “I LOVE GOLDA MEIR”. Even the Rabbis avoided this no-talent creep, stepping around him as you would a big dog turd.

Naïve idiot that I was, I tried to talk saxophones with him. BIG mistake.

“Hey, man, what brand mouthpiece do you use?”

“Do you double on tenor, also?”

“Kaftaferogoondoolabob”, he hacked in my face, a loogie just barely missing my pan. I was getting kinda steamed at his phoney crazy ass act.

“Did you blow your Daddy to get that horn, you old freak mother?” I leaned into him.

“Oops!’ I kicked his sax case over, causing nickels, dimes, and quarters to spill out onto the sidewalk, coins rolling into the gutter and further out into the street.

“I’LL KILL YOU!” he screamed so loud everybody stopped in their tracks and turned around. “YOU DAMN KUGEL MATZO BALLO VOOTY BASTARD FUCK SIDNEY MENDEL KATZENBERGER!”

I strolled down the road and felt a little bit better than I did ten minutes ago. I turned for a sec and saw Branovan chasing his change into the street, shiny new Cadillacs almost plowing into his stocky frame and honking angrily at him. The world was crazy and I didn’t care anymore.
Posted by Andy 7 at 9:29 PM