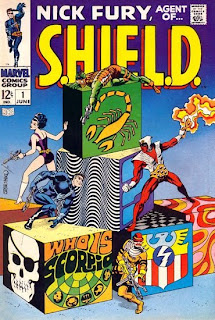 A Jim Steranko comic book cover leapt off the stands every month; no other comic on the newsstand even looked like his or even came close. Steranko’s first work for Marvel was Nick Fury, Agent of S.H.I.E.L.D., a poor cash-in on the James Bond spy movie craze featuring a post-war Sgt. Fury with a few of his Howling Commandos on board (Dum Dum Dugan and Gabe Jones). The series was barely breathing oxygen providing support to the superior Doctor Strange in Strange Tales Comics. Steranko originally drew layouts for Jack Kirby in the series but eventually took over the art reins, then taking over the writing reins from Stan Lee and Roy Thomas, gaining complete control over the series and taking it places not seen in comics at the time. 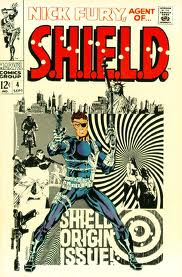 One of the best examples of Steranko’s graphic genius is the legendary cover to Agent of S.H.I.E.L.D. #4, often imitated to the point of even The Simpsons comics doing a tribute to the cover. In addition to Agent of S.H.I.E.L.D., Steranko blew minds with his work on Captain America, X-Men, and a cover for The Incredible Hulk that has to be seen to be believed!

A new Steranko comic release in 1967-68 was as eagerly anticipated as a new Beatles single, in that it heralded an exciting new way of seeing things. A lot of other kids must have agreed with me because they were some of the fastest selling comics to fly off the stands. It took me years to score Agent of S.H.I.E.L.D. #1 because it instantly sold out on release.

Jim Steranko, born November 5, 1938 in Reading, Pennsylvania, grew up working in carnivals as a fire-eater, magician, and later resorted to burglary. He also got heavily into playing guitar in various local bands. After a period of commercial art, Steranko moved over to illustrating several short-lived superhero series for Harvey Comics. 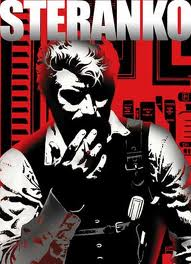 Steranko’s legendary work for Marvel gave him artistic control that included splash pages in the middle and end of the comic, sometimes even taking up two pages, unheard of at the time. He also colored his own comics, a first at the time. All this artistic freedom eventually came to a head when Marvel big kahuna Stan Lee began heavily editing Steranko’s previously untampered work,creating major friction between the two men.

Steranko’s next move was to start his own publishing company Supergraphics, which produced the Steranko History of Comics in 1972, one of the earliest academic studies on the history of comics. By the 1980’s he published Prevue Magazine, an aggressively heterosexual movie magazine that always managed to plug in a few photos of Sybil Danning and Steranko clutching some hot, new young blonde action movie starlet.

Jim Steranko was inducted to the Will Eisner Hall of Fame in 2006, and continues to this day to be a major influence in comics art. Like a Sam Fuller film, Henry Moore sculpture, or Captain Beefheart album, once you’ve seen a Jim Steranko comic you know you’ve seen something incomparable and unforgettable. 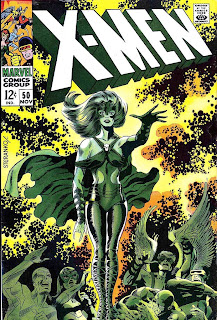