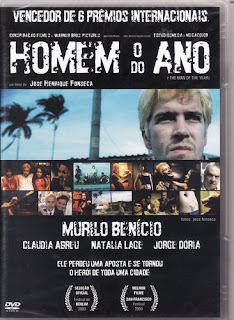 The Man Of The Year, aka O Homem Do Ano, is a remarkable film that’s equal parts crime melodrama, political satire and Brazilian erotica seamlessly combined by director Jose Henrique Fonseca. Murilo Benicio delivers an electrifying performance that stays in the memory long after the film’s bizarre climax.

Man Of The Year is the story of Maiquel, a Brazilian dude who loses a bet and pays the price by having his hair dyed bright blonde, embarrassing to his circle of pals because it makes him “look gay”. The penalty backfires because Cledir (Claudia Abreu), the colorist at the beauty salon is a hot babe and hooks up with him.

Returning to the bar where his boys hang out to show off his new locks, everybody gets a good laugh except for asshole Suel, who won the bet but resents Maiquel’s cool attitude. The next day Maiquel evens the score unfairly by shooting Suel in the back on a deserted street, the only witness to the murder being Suel’s teenage girlfriend Erica (Natalia Lage). 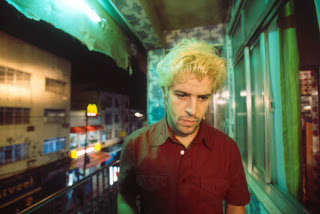 Suel was such a scumbag and neighborhood terror that the police refuse to take Maiquel in even after he confesses to the murder, commending him by sating “Good work taking the scum off the streets”. Neighbors and local merchants leave food and gifts at his doorstep, the ultimate gift being a pot bellied piglet Maiquel names “Bill Clinton”.

Things get complicated when Erica shows up at his door needing a place to stay now that her thug boyfriend is dead. Erica is a steaming mass of budding nubile sexuality, staying at Maiquel’s crib and putting a cramp on Cledir’s play time with Maiquel. Cledir wants to marry Maiquel but Erica is mentally more in Maiquel’s league, showering with the door open and playing with the pig, who Cledir resents.

Maiquel caves in and marries Cledir (with Erica sulking in the background), getting a job at the local pet store. His toothache sends him to Dr. Carvalho (Jorge Doria), a dentist who fixes his teeth for free for killing that black scum Suel and makes a bizarre proposal during the dental operation.

Dr. Carvalho and his businessmen friends will pay him a huge salary if he continues killing street thugs that offend them, who not coincidentally are poor and black. Maiquel accepts and systematically killing every thug he’s contracted to kill, filling up his pockets with more money than he’s ever seen. Cledir tightens the screws on Maiquel to give her a baby and kick Erica out. 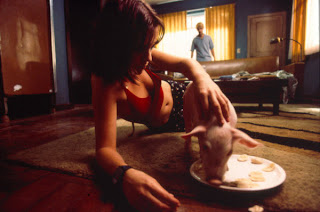 Maiquel gives her the baby she’s wanted but Erica stays, banging Maiquel when the missus is away. Meanwhile Suel’s gangsta pals get their revenge by waxing each of Maiquel’s friends one by one. The trail of blood continues when Maiquel accidentally kills Cledir shortly after his birthday.

At first Erica is remorseless about dumping Cledir’s body but finally cracks and goes to church to repent for her sins. No longer following thugs, she’s now a disciple of a young, good-looking priest. Maiquel promptly beats him up. Losing Bill Clinton, Cledir, Erica and all his old buddies from the violence that he started, he finally decides to end the trail of blood by killing off the businessmen’s committee that put him up to the hit man job he grew sick of.

The film ends with Maiquel stripping the hair color worn like a phony halo and returns to his black hair color, leaving town and the deaths that haunted him behind.

Man Of The Year is based on a novel called O Matador by Patricia Melo and never gets boring. The screenplay has deft touches of sexuality, humor and menace. Breno Silveira’s cinematography is absolutely gorgeous, making even the most grubby and grimy Brazilian slum look like a colorful picture postcard. If you like wild movies with guns, girls and cute pigs that eat shoes then Man Of The Year will make you smile. 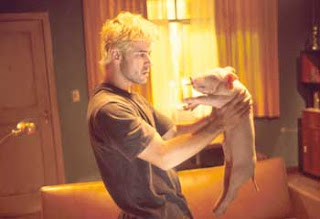 I like this movie. It's so calm and dreamy while people are getting killed. Total opposite of Pulp Fiction. I think I need to see it again.