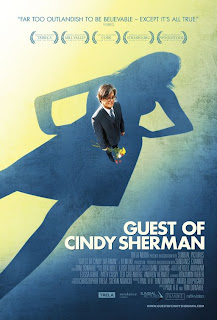 In the Nineties there was a cable access show in New York called "Gallery Beat" hosted by two nutty guys, Walter Robinson and Paul H-O who would sit around and criticize art show openings the way Siskel and Ebert reviewed movies. The reviewing of gallery openings is genius if you ask me because they're usually more thrilling than the crap art exhibited. In between reviews they would roll video of Paul H-O "interviewing" humorless stuffed shirt artists like Julian Schnabel and the interviews took on a sort of Howard Stern-show style dimension/dementia. The results were often very funny, never anticipating the surprising turn they would take.

Never at a loss for words or guts, H-O approached highly reclusive artist Cindy Sherman at an opening and asked her if she would like to be interviewed for "Gallery Beat". Without skipping a beat, she smiled and said, "Sure!" People's jaws dropped; Sherman had denied interviews with The Atlantic, The New Yorker and Art Forum but agreed to do "Gallery Beat". Paul H-O then interviewed her several times in her studio and got the scoop the art press had never been able to get. Perhaps Sherman agreed to do the interviews because of the show's lack of reverence towards the clay idols of the Manhattan art world, perhaps she had a crush on Mr. H-O (Hasegawa-Overacker), flirting and giggling all through the interview like a high school cheerleader.

Paul H-O is dorky but likable and has no airs about himself and comes off as a very funny guy, but his eventually becoming Cindy Sherman's boyfriend shocked their friends. Nobody saw it coming but it culminated in him moving in with her and their having a relationship for the next few years. The film "Guest of Cindy Sherman" touches on several topics at once: 1) a documentary on Cindy Sherman, 2) the "boys club" of artists in the Eighties and what a tough circuit it was for women to participate in, and most importantly: 3) the pain of being a less than somebody dating a big time celebrity.

For all the intensity and darkness that Sherman’s art presents she comes off as a highly charming woman with a refreshing modesty about her work. We see brilliant examples of her art where she plays battered wives, plastic surgery casualties, prim spinsters, and other disturbing images of tortured women. As her romance with H-O develops she becomes increasingly rich and famous, buying a house in the Hamptons, getting free credit from Prada and partying with movie stars. No big sin, of course, artists have to eat, too, but her art work became increasingly less acidic. An example presented is her Circus Series where she’s done up like clowns, the art fairly benign and looking compromised.

H-O eventually got bored with his TV show folding and having nothing to do so he took up surfing as a regular activity to the point of neglecting poor Cindy. The couple sought therapy from the same analyst with H-O complaining that the shrink preferred analyzing Cindy more than him. Who wouldn’t? Imagine those weird sessions.

The straw that broke the camel’s back, according to H-O was when he was at a high hat celebrity party and Cindy was seated at the front table and he was seated thirty tables back with his place card inscribed “Guest of Cindy Sherman”. They broke up shortly after. Elton John’s life partner relates a similar tale happening to him, but Elton actually got up and did something about it.

When “Guest of Cindy Sherman” was being made Sherman supported the film but at some point changed her mind and now refuses to talk about it. It’s too bad because the film actually made me understand and appreciate her artwork for the first time, and I can’t imagine people hating her after this film was made. Maybe she’s bitter about her failed relationship with H-O, but I don’t know if I blame her. He’s been working this film like crazy all over the festival film circuit with no DVD release in sight. So if you see this movie listed on the Sundance Channel catch it while you can. I think it’s pretty brilliant stuff!
Posted by Andy 7 at 9:30 PM