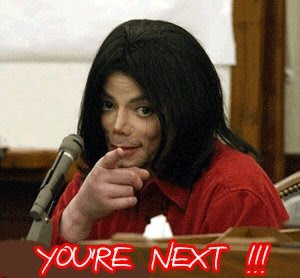 On Thursday, June 25, 2009 a triple-header of iconic deaths occurred which no Dead Pool enthusiasts in a million years would have predicted: Sky Saxon of the Seeds (Sixties), Farrah Fawcett-Majors (Seventies) and Michael Jackson (Eighties).

The eulogies heaped on Michael Jackson read more like an old Universal Pictures horror film synopsis than praise. Just like Frankenstein, The Wolfman and The Invisible Man, Michael Jackson was a lost soul gone astray who disintegrated into perversion, decadence and insanity. Val Lewton must be jealous as hell.

Farrah Fawcett-Majors was never a terribly sexy woman to me. Her hair style was goofy and she had a vapid look about her that seemed dead and stupid. Her hook-up with Ryan O’Neal reminded me of Barbara Payton shacking up with Tom Neal: another cheap blonde knocking boots with a surly, heavily-medicated actor.

Although Sky Saxon hadn’t produced anything in years I still listen to The Seeds with their tough as nails punk sound counterbalanced with the most delicate electric piano in history. His sneering vocals on “Pushin’ Too Hard”, “Can’t Seem To Make You Mine” and “Tripmaker” are the stuff of legend and dare I say it, he was a superior punk singer to the much-lamented Lux Interior. The happy memories of going to the beach in the daytime or the Fairfax Avenue headshops in the nighttime to 93 KHJ or KFWB 98 blasting out The Seeds and other garage-punk thugs warms my heart. The other two celebrities can evaporate in the garbage can of culture but Sky Saxon’s sneer will remain eternal.
Posted by Andy 7 at 6:11 PM

I love this, thank you.

I recently came accross your blog and have been reading along. I thought I would leave my first comment. I dont know what to say except that I have enjoyed reading. Nice blog. I will keep visiting this blog very often.