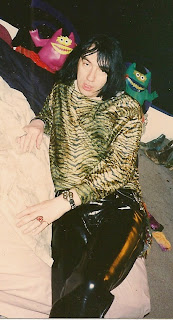 Rainbow Bar & Grill (9015 W. Sunset Blvd) = Ah, the Rainbow Bar & Grill…the decline of rock civilization unfolding before your eyes…mp3 killed the video star, but I digress…
The “legendary” pizza everyone raves about will take about an hour plus before you even get to see it on your table. And it’s not all that, really. If you want to eat right away, I would suggest (believe it or not) the Greek salad which is surprisingly goods, seasoned well and absolutely delicious.
Celebrities spotted at the Rainbow: Lemmy of Motorhead who probably gets his mail delivered there, the Osbourne Family (pre-TV show fame), Kevin Dubrow of Quiet Riot RIP, and a heavy-metal Cecil B. DeMille cast of thousands.

Hollywood Bowl (2301 N. Highland Avenue) = Everyone has to hit the Bowl at least once in their lives. Last time I visited the Bowl was for the Motley Crue/Aerosmith show. First thing we did was park at Hollywood & Highland and hit the Bowl shuttle on Orange Drive. I was the only guy on the shuttle besides the surly bus driver; every metal tramp, stripper and strumpet was riding the hooker shuttle, whoo! Cheap blondes in buckskin bikinis were craning their necks scoping me out while my girl was laser-beaming stink eye at them. Let the rock ‘n roll begin, and begin it did. Since my girl made clothes for Mick mars (Motley Crue) we got in through the VIP entrance behind the Bowl. The reason I mention it is because it was fun watching Leif Garrett try to talk hi way in for free after the guest list staff didn’t see his famous name on the list (“Dude, don’t you remember me from Behind The Music?”)
As we walked in I noticed Slash walking by us, his bodyguards were three steps behind him and running to keep up. Some bodyguards. I hope he puts a stop payment on their pay checks.
We got a great box in the orchestra pit (seats four). The sound was decent (ah, the review begins), visibility is good no matter where you’re seated with lots of video screens in case you’re not a squinter. Motley Crue were great; wish they did “Too Fast For Love” and “Afraid”, but they did “Dr. Feelgood” so I went home happy.
As soon as Motley Crue were done and Aerosmith opened with “Toys In The Attic” (my favorite R.E.M. song) it was our cue to leave. If I want to hear Aerosmith there’s always KLOS and trailer parks.
The bimbo shuttle wasn’t happening so we walked down Highland, everyone incredulous we would bail on Steven Tyler’s mega-lips, even the rent-a-cops schitting a brick (“how could you?”)
The most outraged of all was MTV has-been Jesse Camp and his entourage walking up as we were walking down the road. “Dude are they done already?”
No, but we were. Who wants to hear the same old song and dance?

Whiskey A Go-Go (8901 W. Sunset Blvd) = The Wiggy A Goo-Goo, those were the days, and they were funny ha-ha days, too.
You’d be on stage rockin’ and shakin’ yr. ass and there’d be video monitors all over the place and while you’re singin’ up there you’re staring at yourself performing and it’s a lot like boppin’ in front of the bedroom mirror when you’re a kid only a lot of poor people paid to get in so your ego is magnified times 100 and once two girls fought over me at the bar upstairs and I ended up going home alone because it wasn’t really about me after all, was it?
The Whiskey is a funny place because The Doors played there and now a tribute band called Wild Child plays there and once Van Halen played there and now a tribute band called Atomic Punks play there and I played there a lot and how soon will my tribute band be playing there? 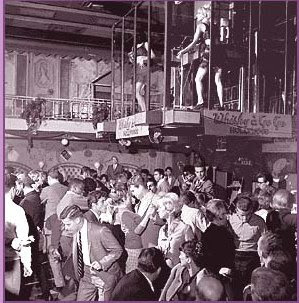 The Coach & Horses (7617 W. Sunset Blvd) = I was in a very-Bad-MOOD before I went to the Coach & Horses because my former band sent me a pseudo-litigious e-mail about some mySpace crap I had no involvement in. By the end of the night at the C&H I was grinning like a little chimp flinging Number 2’s at the zoo.
The door man (Paul? Too drunk to remember) was the nicest I’ve met in years. The bar is dark as hell with a jukebox that made my jaw drop. As soon as I heard “Hold Tight” by Dave Dee, Dozy, Beaky, Mick & Tich I knew I was home.
The drinks were stiffer than Walt Disney’s corpse: My first 2 scotch & sodas were rabbit punches but the third was the haymaker. I almost lit my nose instead of the cigarette I jammed into my gob. The bartenders here rule like a wrench. Dammit, I was so larried up I could have sung a Johnny Mathis aria at Miceli’s.
The night ended with a cab ride home from a cabbie named Hamlet, I schitt you not. Coach and Horses is chill to kill.

The Roxy Theatre (9009 W. Sunset Blvd) = When I played The Roxy Theatre the sound was very crisp and clean on stage, great monitors finally I could hear my Lizabeth Scott On White Crosses Croon and screeching saxophone over the din of feedback guitars, kick-ass monster mix, etc.
The sound man was Don Henley-style cocky and rude but the end result was brilliant, angel’s flight to the ears cheers mate, but buy yourself some manners, Don Henley clone.
The lighting guy was excellent. Never met him before in my life but he knew all the dramatic moments I our songs instinctively and lit us at all the right moments to chilling effect.
The dressing rooms are pretty small but big enough to make out in. I road tested that option myself.
If everything about the Roxy seems small it’s because the club got its start as a dilapidated striptease club bought by Lou Adler, John Phillips and some silent partners. The first show they put on there after they gussied it up was an unknown rock musical from England called “The Rocky Horror Show”. Not a bad start, eh?
In short, the Roxy isn’t the greatest club to see a show at but it’s one of the best for performing in. You will love it.

Frankie & Johnnie’s New York Pizza (8947 W. Sunset Blvd) = If the Rainbow is for rock royalty (haha) then this joint is for the dispossessed rockers, the street skanks and the merely curious. They’ve got beer and wine, if you want it harder (hey girls) go to Turner’s and flask it, baby. F&J’s isn’t like the ‘Bow but at least you get your pizza in less than an hour. And individual slices thin and thick crust can be had in two shakes of a lamb’s tail. Yes, the pizza’s just OK but I like it.
The Italian sandwiches are big and happy and affordable. Their dessert selection’s not bad, either. Apple cheesecake and tiramisu are some of the specialties there. I love the Sunset Strip.
Posted by Andy 7 at 8:36 PM

I love this. I almost miss going out.