Bummer In The Summer 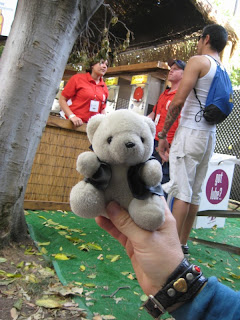 Well, summer's here and you know what that means: The 2009 West Hollywood LGBT (Lesbian, Gay, Bisexual & Transgender) Pride Festival fell on the weekend of June 13 and 14, 2009. This was the third time I attended the festival and most likely the last. There were some pretty radical changes from the last two times we attended, and all for the worst. The three passageways were narrowed down to only one, which created an unbearable congestion of people taking forever just to get to the festival area. Where there were two exits before was now reduced to just one so you had to leave exactly the way you came in, stuck in gay gridlock.

The gay guards at the gate made everyone open up their purse or handbag, and when the big Latino guard saw the leather vested teddy bear in Rebecca’s purse, he squealed, “Have a good time, you leetle queenie bear!”

Saddened, we trudged over to the bandstand where we saw some great shows in the past, but the funny drag queen who usually hosts the show wasn’t on stage. Instead some boring meat puppet from E! Channel was gabbing like a broken record at 78 rpm. He brought Andrew Christian on stage, who whined about getting kicked off some terrible TV contest show before he introduced a boring boy fashion show on stage. The lawn in front of the bandstand was gone, paved over by concrete so everyone was forced to stand and not lie down anymore. Yuck! The only thing that held our attention was an insane plant man creature on stilts who stalked (ouch!) around the grounds. He was awesome!

After a few more dead minutes of watching the world decompose before our eyes, we strolled down Melrose Avenue quietly, and then Rebecca said, “I’m surprised we went this year. You told me last year that you were done with Gay Pride.”
“I did?”
“Yeah, you said that it wasn’t going to get any better than it did last year.”
“Oh, wow, I totally forgot…Oh well, maybe next year we’ll go to Long Beach Gay Pride and we haven’t been to Palm Springs Gay Pride, either.” 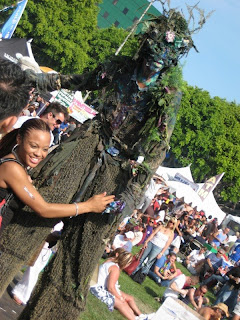 Sorry to read about your lackluster day spent at WeHo Pride.

The last time I went to the WeHo Pride parade was in '99. The first time I went was in '89. Between those ten years - things had changed a great deal. The same goes for the WeHo Halloween Carnival (which used to be so campy, wild, and fun) It was once so good, it too now sucks balls.