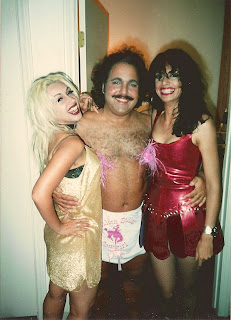 There was a time when we designed leather and vinyl party clothes we were getting a lot of business from the adult film industry, and in the course of going through that weird little era there we met a few, uh, “showbiz personalities”. There were definite heroes and villains:

Traci Lords (Melrose Place/New Wave Hookers/What Gets Me Hot): Rebecca did a fashion shoot with a great photographer named Raoul who loved our clothes. "My friend Traci would probably love your designs. The next time she comes by I'll have you guys come over and show her your book!" Cool.
So one night we sat around his studio and Traci walked up the stairs making cat noises, and as soon as she reached the top of the stairs she saw us and stiffened. She got really serious all of a sudden.
"I'm Traci", she introduced herself and stiffly shot her right hand out for a shake, "-and you are?"
After she shook hands with my wife she followed the same cold greeting to me.
"I'm Traci! - And you are???"
"Traci", Raoul smiled, "Rebecca and Andy make amazing clothes. You really have to check out their book!"
"Well!" she blurted coldly."Okay!"
She opened up Rebecca's portfolio, flipping pages and commenting. "Oh, this is very futuristic. So Mugleresque." Oh brother, an expert on Thierry Mugler now.
"This looks very Venetian Vogue Magazine. And this is goth by way of Pucci." I inwardly rolled my eyes. What a douche.
"Traci, do you think her designs would go well for your next film?"
"Well!" She stiffened like a cigar store Indian. "She definitely shows some potential." Oh my God, I'm going to kill this dumb bitch. And then it happened. She flipped to a page with some nudity and freaked.
"You know, I don't have to do porn anymore, okay? That's all behind me now!!! I'm beyond just showing my tits, I worked really hard to get a straight career and I'm over degrading myself doing hard Core SMUT!!!!" She practically screamed, jumping out of her chair. We left the studio feeling like a pair of child molesters.
"You have to excuse Traci", Raoul whispered, "She's still a little touchy about her past."

Two weeks later we were at Bookstar and as I walked by the magazine racks I froze. Staring straight at me was the cover of Details Magazine featuring a topless Traci Lords covering her breasts with her hands, the headline reading, "Traci Lords Exposed For The First Time". What an asshole.

A stylist wanted to direct her own rock video starring my band Cockfight and Ron owed her a favor, so he appeared in our video playing a male stripper who gets booed by a bunch of old ladies. Ron was very good in the video: he wore pink feathered pasties and did a Michael Jackson moonwalk while old ladies threw trash at him and booed him. He was very funny and enjoyed doing the video.

His dressing room was next to ours, and I walked in to his room and saw him relaxing on the floor in his stripper outfit. "Hey, I'm friends with Axl Rose and I know the Motley Crue guys, too. I like your band name - Cockfight, that's pretty rad, dude! Sexy stuff!" He was very eager to make friends, no attitude at all. All around him on the floor he had newspaper clippings of Savannah's suicide. It was sadly weird, he would quietly look at pictures of her and reports of her death with a wistful look on his face.

During the shoot he invited us to his movie opening at the Academy of Motion Picture Arts and Sciences in Beverly Hills for his movie "John Wayne Bobbitt Uncut". When we approached the front of the theatre Ron ran out and told all the news cameramen, "Look everybody, it's Cockfight, they're a great new band. Take their picture!" What a great sport. He later became a big TV star on "The Surreal Life" where he actually earned a lot of respect with his clothes on.

Jasmin St. Clair (Cock Smokers/I Love You, Suck My Dick/Jizz Junkies): Jasmin St. Clair and Rebecca had a lot in common. They liked heavy metal, hated other girls, and loved Barbie dolls. For awhile they were great friends and we would always have dinner at her house every Fourth of July. She lived in a condo apartment building that had tons of scary fat Albanians. She always took forever to get ready for the swimming pool, but once she did she was hysterical. She would strut out to the pool wearing a 6 year-old girls' Hello Kitty bathing suit on her buxom porn goddess frame. She got in the Jacuzzi and the hairy Albanian women looked like they wanted to strangle her!
"Let's get out of this Jacuzzi, Rebecca", Jasmin sneered, "This pool smells like shit!"

Jasmin got kicked out of a Toys-R-Us once for bouncing around the floor in a Space Hopper, getting the dads a little too excited. The soccer moms were not amused. She didn't score points with the Orthodox Jews in my neighborhood, either. On a Saturday we walked over to Starbucks and these guys went, "Hey where do you girls think you're going?"
"We're going to Synagogue!" she barked. "Wanna come?"
When we got to the Starbucks, some cafe jockey drooled, "Hey you're Jasmin St. Clair! I saw you on Howard Stern!"
Jasmin's chiseled face tightened. "I'm not her, OKAY???"

Actually Jasmin got so much work done on her face and body it ruined her. With her puffy cheek implants, scary Frankenstein jaw job, etc. when Rebecca and her walked down the street Rebecca got the whistles, not her. Jasmin got snatchy about it and her jealousy got the worst of her. She didn't like Rebecca any more and none of the day-long gym workouts could compensate for what was a butchered face. She tried to make a go at wrestling with disatruous results; fuck knows what she's doing now. Friendship can be a fleeting thing.
Posted by Andy 7 at 9:18 PM

Tiresome Traci what a douche