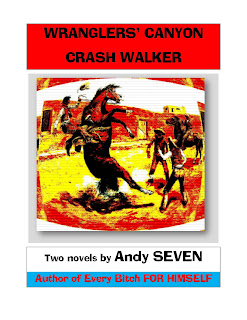 Meet Crash Walker: a man too obtuse for trouble, too lazy to kill anyone, and in addition incredibly boorish, self-centered and incredibly good looking enough to earn contempt from everyone he meets, especially from other men. He is the star of my double novel set WRANGLERS' CANYON/CRASH WALKER.

The western novel format is an extremely limited one. Most stories from that era are rigidly defined; they have to be, of course, since they are confined to a specific point in time. The standard western tale has been told countless times via literature, television, radio shows and motion pictures for over a hundred years. The biggest challenge for me was to write something fresh within that classic genre. 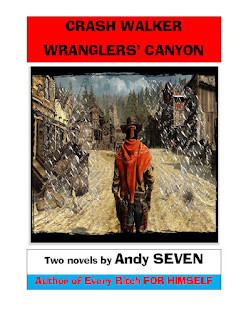 As for our hero, Crash Walker, although he populates both novels, no two stories could be more different; in Wranglers' Canyon our hero is a floater, drifting between jobs as a cattle driver, ranch hand, rodeo rider, singing star, convicted criminal, ultimately promoting to Sheriff of Jonestown. He accepts the role forced on him.

In the second novel Crash Walker,which takes place 100 years later, he's a western television star in Hollywood during the post-JFK era. This time he’s the target of an ominous conspiracy to exploit him as a puppet politician propped up to serve a small Californian committee of powerful businessmen. In the second novel, unlike the first, he doesn’t accept the role forced on him.

He’s also charged with the murder of a right wing television star, making him simultaneously famous and notorious, but not quite the way he wants it. Through it all he films toy commercials, performs publicity stunts, makes public appearances, visits his mentally insane missile designer father, and dodges an even more mentally unstable ex-girlfriend. 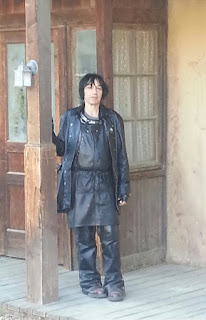 Walker is even more of a fantasy figure in the second novel than in the first one, i.e. his name isn’t even real, it’s a showbiz name created by a casting agent. While the first novel challenges the bridge between fantasy and reality, the second one has its feet firmly planted in reality with our star earning his keep with fantasy.

TV westerns were a major pop culture force during the Sixties, putting our hero squarely in the center of the action in Hollywood, placing him at Sunset Boulevard parties, teen festivals by the beach and Hollywood movie premieres. If it happened in the Sixties then Crash Walker was most likely there.

The book you’re reading is presented in the double novel format so popular during the paperback publishing boom of the Forties and Fifties. Both novels have been joined together in one volume because in addition to starring Crash Walker they also have parallels in characterization and plot development. This was a surprising coincidence, given that both novels were written four years apart of each other.

In both novels Crash Walker responds to a whirlpool of turbulent change forced upon him by men of control, greed and societal pressure. These are tales about troubled times and the man who meets them head on.

Each website provides a short sample - about four chapters worth - of the novel for previewing before purchase so you can see what deviltry is brewing in this shiny beast. 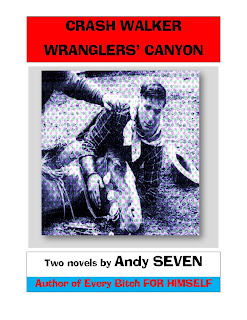