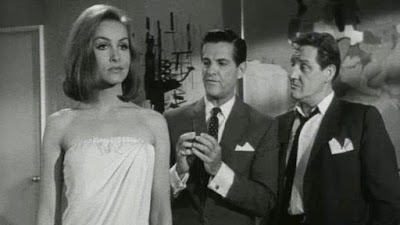 In the early Sixties teenage America fell under the spell of the Horror & Sci-fi movie explosion hitting drive-in theaters all across the country. It was tearing them away from their TV sets, and CBS fought back by programming an army of shows to win them back. Shows like The Munsters, My Favorite Martian and Lost in Space were hitting the airwaves harder than John Glenn’s orbit in Friendship 7. There was one show in the bunch that was the most memorable and stranger than the rest called My Living Doll.

My Living Doll starred musical actress Julie Newmar and Forties matinee idol Bob Cummings. Although it was a situation comedy it was more sophisticated that the other shows listed above; I think it simultaneously helped the show and destroyed it, too.

My Living Doll began as the tale of Dr. Bob McDonald, psychiatrist for a NASA-based agency, who gets a call in his office from the head scientists in robotics warning him of a robot on the loose rampaging around the building. Expecting a terrifying nuts and bolts cyborg to wreak havoc in the hallway, Dr. McDonald is accosted instead by a beautiful Amazon clad only in a towel!

Julie Newmar lists her training in mime as background for the role of Rhoda (formerly AF 709) and she uses it to full advantage. Her jerky robotic movements are flawless in their execution and her facial expressions as a machine processing bizarre human behavior and equally perfect. Watching her defuse lecherous men's advances with cold, mechanical responses is space age feminism at its finest. 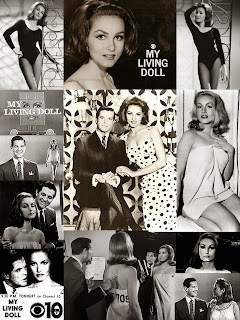 Viewing the episodes of My Living Doll: The Official Collection DVD, are a mixed bag between sexual tension and feminine comedy (beauty contests; kleptomania at a Beverly Hills jewelers, etc.) with the feminine comedy being more fun to watch. The sexual tension business is neither funny nor sexy, due to Cummings working the camera too hard.

Speaking of Cummings, the character of Dr. McDonald was intended to create some spark of sexual tension between himself and Rhoda, but the producers shot the pooch by hiring a tired old guy to play a young, available bachelor. Just think what the show would have been like if they hired someone like, oh, Adam West to play Dr. McDonald. (Never mind).

Legend has it that Cummings was not only jealous of Newmar’s popularity but even wanted to take over her role as the robot. The poor man thought kids were tuning in to watch him!

I remember watching this show shortly before Newmar hit pay dirt as The Catwoman on Batman and liked it, but it was obvious the show was doomed. With her Amazon build and low, husky voice, Newmar was on a wavelength that wasn’t TV friendly at all. Although the producers tried to make her look wholesome there was an aggressive eroticism about this robot that definitely made the show too bizarre to be successful.

Walking a tightrope between beautiful and funny is a major risk, Thelma Todd being the most infamous example, but few pull it off as brilliantly as Julie Newmar, and if you want to see it done to perfection than seek out My Living Doll: The Official Collection, Volume One, available on MPI Home Video. 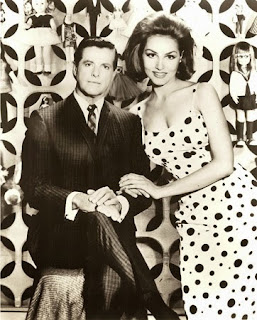