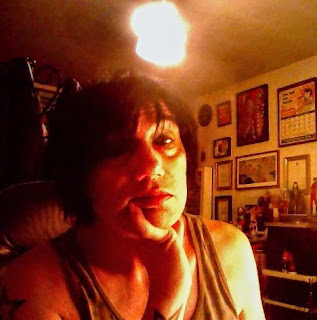 One of the bigger trends in internet culture of late is a style of writing called “flash fiction”. Just like flash mobs they are meant to be quick and annoying. Flash fiction, for those who haven’t experienced it yet, is a short story presented in a tightly-enforced limit of words, i.e. tell your story in 500 words or less.

Parameters this small hamper any chance of a story being told with any semblance of depth or perception. The effect is not unlike eavesdropping on half a conversation between two people above the roar of a truck growling nearby. Something’s going to get lost in translation and they’re already speaking fucking English.

I attribute the phenomenon of flash fiction on the public’s decreasing attention span via fast paced technology. As a result, people get their sensation immediately without any regard for the other elements that make a story so memorable, like location, mood, emotion, or even plot buildup. In a weird way there are no spoilers in flash fiction; the story IS the climax.

So, like a curious monkey who wanted to know just what these matches do when you scratch them I started hanging out at a crime flash fiction page called Shotgun Honey (www.shotgunhoney.net). Some of the writing was good, a lot of it was bad, predictable “Breaking Bad”/Tarantino rip-off shit, but the challenge was there: submissions had to be 700 words or less. Good luck.

I came up with a new story which I ended up posting myself, “The Pickpocket In The Slam Pit” (http://blackhairedboy.blogspot.com/2014/04/the-pickpocket-in-slam-pit.html). I would have loved to have it posted on Shotgun Honey, but the word count was double the amount allowed by the website. But I tried to make it work, how I tried:

When I saw the 1,340 word count I started thinking about what could be eliminated in order to keep the story intelligible after all the cuts. Since the count was nearly double the stringent 700 word limit I would need to cut out half the story!

For starters I would have to eliminate any extraneous characters from the story:
1. The bouncer – does Stew Rat, the main character, really need to be patted down at the punk club? Why don’t we just assume punks are allowed into a gig without being frisked. Umm, sure!
2. The first three guys that get their wallets lifted. We don’t need to know what they looked like or what their wallets looked like. Too much detail!
3. The band playing on stage (Crank Call) while Stew Rat slithers his way around the mosh pit. Does anyone really care what the names of their songs were? All punk bands sound alike!
4. The big bruiser who’s about to bust Stew Rat for his crimes. WTF? He’s not the main character, who gives a shit about him?

Okay, we’re now down to about 950 words. Only 250 words to go before my story can be published (IF they like it). I have to kill some more unimportant details:
1. Stew Rat’s spotty skin, freckles and mangy demeanor. How does that help the story? All punks look alike!
2. The name of the club, the town it’s in and general atmosphere of the evening. Gah! So much folderol. We want to get in on the action and WE WANT IT NOW!!!

Okay, so I killed the atmosphere, mood, characters, humor and half the plot of the story. All that’s left is the death of Stew Rat, and I’m still down to 800 words. Damn, double damn. My story’s still too long for Shotgun Honey. I suck, just like Herman Melville. Damn our words!

I don’t mean to pick on Shotgun Honey, in all fairness there are dozens of flash writing websites like them – ReadWave comes to mind - that require brevity for the attention challenged, but expecting any fiction that’s got a tale to tell in 700 words or less is going to be nothing less than awful. 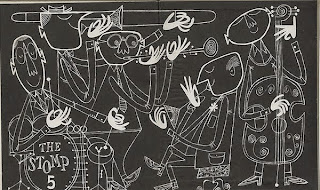 Lately I’ve been listening to a lot of early Seventies music, esp. from Europe where music became even more avant-garde than all the Mod and Psych experiments that preceded it. Here’s my ten favorite tracks from the past month:
1. Apache Drop Out – Edgar Broughton Band. The band that named this blog covered not one but two great songs in one fell swoop: Captain Beefheart’s “Drop Out Boogie” and Jorgen Ingemann’s “Apache”, both done really well. This was a big deal on FM radio when I was a kid.
2. Black Sheep Of The Family – Quatermass. Another great Harvest Records band (along with Broughton), this power trio minus guitar was very similar to The Nice. It’s a short, tight rocking song with great some great organ playing that alternates from atonal blasts with funky blues runs. And the pterodactyl album cover is a classic.
3. The Devil’s Answer- Atomic Rooster. Atomic Rooster featured the late Vincent Crane, the great keyboardist from The Crazy World of Arthur Brown. Although they were a primarily metal sounding band this song has some great jazz-blues grooves going on.
4. Kill Your Sons – Lou Reed. Although “Sally Can’t Dance” sold millions for Lou the critics really laid into it. This track sounds pretty great, with even wilder lyrics about Reed’s early years committed to Creedmor Psychiatric Hospital. Genius.
5. Hamburger Breath Stinkfinger – Arthur Lee. From his post-Love album “Vindicator” dedicated to MackDonald’s, “The Home of the Golden Tombstone”. More than a few feminist feathers were ruffled with the refrain, “Oh what a dish, she smelled just like a fish”.
6. I Hate Everybody – Johnny Winter. From his great “Second Winter” album, this swing blues track some terrific guitar playing from the man and is further enhanced by his brother Edgar swinging amazingly wild on both organ and saxophone. Another track on the album has Johnny playing mandolin to Edgar’s harpsichord. Blues with an imagination.
7. Willie The Pimp – Juicy Lucy. Juicy Lucy, to be frank, was a pretty awful band – The Misunderstood, their predecessor, were brilliant – but they weren’t a follow up, they were more of a follow-down. On the other hand their cover of Frank Zappa’s Willie The Pimp may be the wildest cover of a Zappa song ever recorded. This was also a huge staple of FM radio back in the day and rightfully so. A whole album of Zappa covers would have melted skulls!
8. Mussolini- The God Bullies. Okay, so I’m throwing in some other decades in here. The God Bullies always made me laugh, sounding like a combination of a wicked goth guitar player with an insane drama student. This song ends with the tribal chant, “GEORGE BUSH, GEORGE BUSH, GEORGE BUSH”. From the Dope, Guns, and Golfing In The Streets album. One of the few Amphetamine Reptile bands I didn’t do a show with, and it’s too bad. They were great.
9. Night of The Hunter – Kim Fowley. Fowley spent so much time making fun of Steppenwolf he actually exceeded them in raunch with songs like Animal Man and this demented rocker. The lyrics are absolutely amazing: “It’s a rainy night in California, my boots are soaking wet…my guitar’s full of diamonds, my house is made of stone”…howling guitars and wailing organs with exploding drums. THAT’S how you make a rock & roll record.
10. The Blues Ain’t Nothin’ – The Charlatans. Although The Charlatans were the greatest American band that never was they’re definitely due some serious reexamining. This track would definitely fit in on Iggy Pop’s “Kill City” album with its spidery honky tonk piano and unleashed saxophones screeching the drug addict blues.

And that’s my Top 10 for this season. I’m sure I’ll find some more great buried treasures the next time I make a list. Happy listening>>> 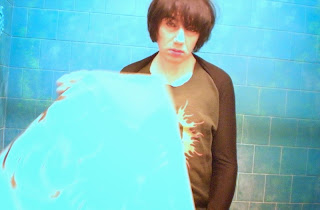 Oh, by the way...for those of you who want to spy, I mean follow me on Twitter, here I am...https://twitter.com/AndyAndySeven. There are about a hundred guys on Facebook named Andy Seven. I'm not any of them so don't waste your time.