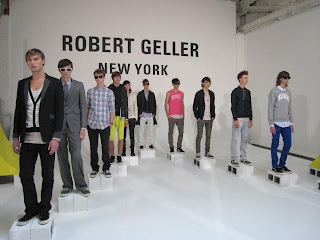 When I think of men’s fashion I try to avoid the two most popular and polar opposites of style, which is either the fussy, fancy metrosexual looks of the eunuch-looking preppy, overly well-dressed man (GQ/Esquire Mag) or the snowboarding/rap artist look who follows everything basketball. Both varieties bore me to death, but fortunately there are designers who create styles that are cool, stylish and don’t put you in either dreaded box. Whew!

One of the best menswear designers is Robert Geller, whose designs are young, exciting and sporty without looking overly dumb. Born in Germany in 1976, he began his career working for Marc Jacobs shortly after graduating the Rhode Island School of Design at the age of 24. Two labels followed his stint with Jacobs, Cloak and Harald, until he launched his self-named menswear line at 2007 New York Fashion Week, and shortly won the GQ/CFDA Best New Menswear Designer Award in 2009. A quick view of his work will easily demonstrate why. 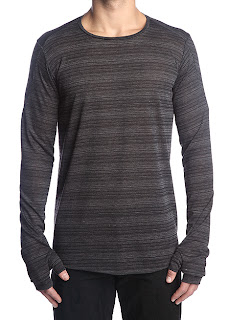 Geller’s fall collection for 2013 has been described as “biker scarecrow chic” because it deftly combines motocross tuck-and-roll black leather vests with long tweed pants and steeped hats with layered striped shirts, sweaters and even striped gloves. Pulled together, the effect is dramatic without being overwrought (paging Rick Owens). I also Mr. Geller’s palate choices a lot more versatile than John Varvatos, whose insane dependency on the color brown almost suggests a scat fetish.

Other designs I like include Zam Barrett’s long sleeved sweater with built in gloves. Pictured below is Maison Martin Margiela’s biker jacket designed for H&M consisting of leather belts sewn together. Really wild but a little too weird, like a hipster straitjacket with its multiple belting. Apparently scoring a used jacket on eBay is easy, so easy you wonder if they sold that many of them. 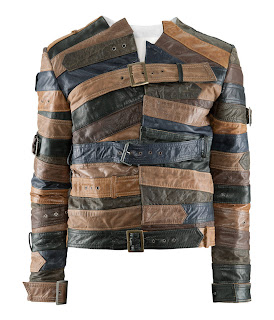 One designer that’s hard to beat for men is Balmain Homme, pictured below. Everything designed is flattering to a man’s body, very fitted, maintaining a sporty, sexy look. There’s something simultaneously stylish and working class about their designs (check out the silver pants), making any guy look just as cool at a nightclub as they are at an off-road race. Fashion without snootiness and it’s even affordable. 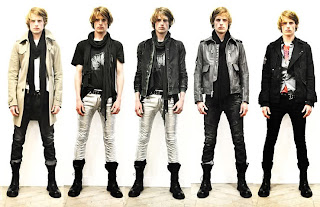 You have expensive taste.