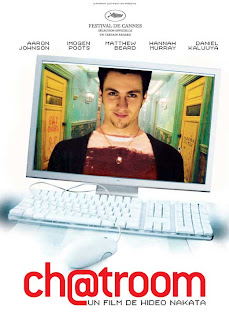 As far as I'm concerned, you haven't been on the Internet until you've been flamed by some asshole(s) on a message board. Adding a completely harmless comment not meant to upset anyone, you find yourself suddenly attacked by a pack of virtual xenophobic dick heads who feel violated by a new voice speaking to them on their precious message board. Well, now there's a movie about an Internet bully called "Chatroom", which was released in England in 2010.

Directed by Hideo Nakata, master of the creepy film, whose past works include "The Ring" and "Dark Water", "Chatroom" continues his creepy pitch quite well. Adapted from a play written by Enda Walsh, Chatroom tells the story of a manic depressive teenager named William (played by Aaron Williams, bearing an uncanny resemblance to Syd Barrett), the son of a successful children's book writer who names her educational book series after William's older brother Ripley. If William's family hated him it would be easy to see why he holds them in such contempt, yet from all signs it appears his family loves him. He's just too messed up to see it clearly.

William starts a chat room of his own called Chelsea Teens, attracting a diverse group of unhappy peers, including Eva (Imogen Poots), Jim (Matthew Beard from "An Education"), Mo (Daniel Kaluuya), and Emily (Hannah Murray playing a more uptight version of Cassie from "Skins"). They meet in an empty room draped in red - representing the tone William tries to set by inciting their hatred. His opening question to them is "What do you hate the most?" William recognizes a victim in Jim when Jim says he hates himself the most.

Nakata makes some subtle color choices in his scenes, depicting William's bedroom in monochromatic tones of gray and only allowing full colors in the virtual house with deep green hallways and vibrant, menacing red meeting rooms. The hallways bear more than a slight resemblance to Stanley Kubrick's hallway in "The Shining" and the chat rooms recall David Lynch, as well. 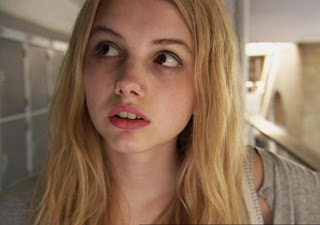 William gets into everyone's head and goads them into performing negative acts with severe consequences, persuading: 1) Mo to confess his love for his best friend's 11 year old sister to him, getting him beat up and called a pedophile, 2) Emily her family will love her more if she vandalizes their home, 3) Jim to flush his antidepressants down the toilet making him go into violent withdrawals, and; 4) mutilating images of Eva's snotty model friends on the Internet. Since Eva is starving for a boyfriend she's somewhat sold on William's bullying methods. For a while.

Jim finally drums up enough courage to confess the major source of his depression, a traumatic abandonment at the zoo by his father when he was only 7 years old. After confessing the horrible story he realizes it was cathartic but William pounces on him by telling him to hold on to his depression, that feeling better about getting his feelings off his chest wasn't beneficial at all. Boy, does this sound like some asswipe on the Internet or what?

Eva's affections for William are snubbed by his obsession with bullying Jim. William goes for the hard sell regarding Jim's suicide by taking him to a site/room called Dorfli Place, a sort of take-off on emo suicidal attitudes. A video tape of a Japanese girl killing herself on camera is played for Jim with William standing in the background leering likes he's about to cream his shorts!

William blows off Eva so he can concentrate on getting Jim to shoot himself, handing him a gun at the very same zoo Jim was abandoned at. Can Emily, Mo and Eva get to the zoo on time to stop Jim from snuffing it and stopping the dastardly deeds of evil William? Only Skins fans know for sure.

To be perfectly honest, Chatroom isn't a great film but it does have a lot of thoughts about the Internet and how its warped perspectives and self-images in everyone in general, especially teenagers. Yes, there are plot-holes, no, the police won't come to your house if you post bullshit about someone, but the bottom line is that if you like Skins or moody teens in general you'll probably give this movie a big parental hug. And anyway, what could be more satisfying than watching a message board bully finally get the piss-thrashing they truly deserve? 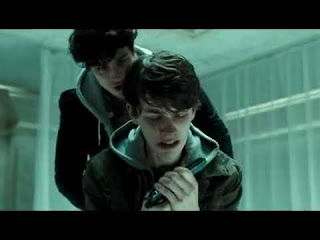