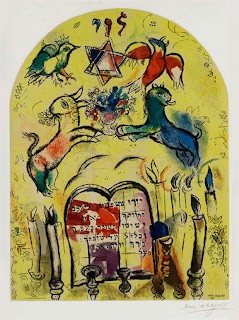 At this time of year the Jewish Holiday Season begins, inaugurated by the Jewish New Year, which is now 5773. Around this time I engage in thoughts both religious and secular, but as long as I’m discussing religion I want to talk about my favorite artist, Marc Chagall. The majority of Chagall’s timeless artwork is Jewish-based, mostly reflecting the streets of the European ghettos of the 19th and early 20th centuries.

Chagall’s art style strikes an equal balance of fauvism, surrealism and naïve art that still presents a challenge to the viewer. The presence of animals in his painting, such as goats, chickens and cows is not necessarily intended for comic relief but is included because many homes in the pre-war shtetls (Jewish villages) had farms which housed these animals. 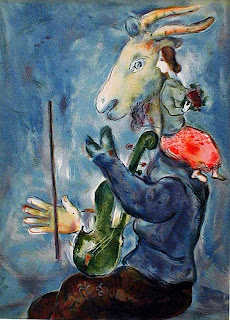 Most religious art is bound by tradition but Chagall’s depiction of religion is the freest ever painted, unencumbered by any pressure to follow reverence. While it isn’t irreverent by any means, there is a playfulness and humor that is absent in most religious work.

Whenever Rosh Hashanah (New Year) and its successive holidays come around I always look at my Chagall books and enjoy the works of a brilliant genius. His work transcends the folklore of any religion - if you’ve got eyes you gotta feel it. 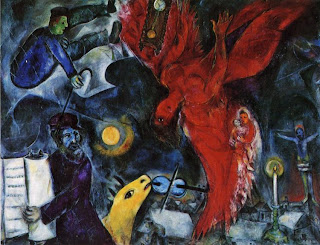 I live in the heart of the Jewish hood on La Brea Avenue between a girls’ school and a wig store (heh!) and the school kids walk by under my 2nd floor window. It’s funny when I play my techno-swing records because a lot of them use clarinet, giving the music an almost klezmer-type sound. One day I was blasting out “Chambermaid Swing” by Parov Stelar, the lord high fixer of electro-swing, and I could hear a bunch of school kids hooping and hollering outside my window.

Who knew Jewish kids were into this Betty Boop swing shit? But it all fits, the music, the era, the culture, a lot of it has very Jewish roots (Afro too, of course, but this is really Jewish sounding stuff!). Just to make sure I wasn’t imagining things I played “The Mojo Radio Gang” by Stelar and I could still hear those crazy kids outside enjoying the music.

After doing a little bit of research I discovered that electro-swing is pretty big in Europe, esp. in Britain and Germany, where they even have gigantic festivals dedicated to this hypnotic, insane dance music. Girls dress like Louise Brooks/Clara Bow flapperdoodle and guys look like old bootleggers, and it might all dress-up , but it doesn’t matter. The king of swing Parov Stelar looks like a male model so you don’t need to re-enact “The Sting”.

Just to raise the Betty Boop stakes some more I played “Princess Crocodile” by Gry, a bizarre ballad about a woman who travels through graveyards as a swing band of ghosts vamp on "Sweet Georgia Brown". By the way, the kids didn’t leave until I stopped playing all that crazy electro-swing. Never mind the lame American punk revival, electro-swing is the very next craze. The kids have spoken. Loudly! 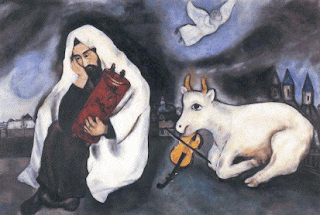