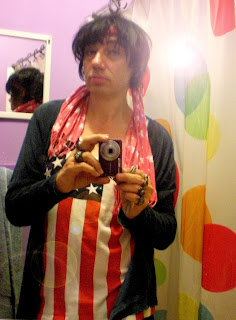 Several weeks ago Jack White was in town for a two night engagement at The Shrine Auditorium, which is located near the USC campus. A friend of ours was handling wardrobe duties in his crew so we managed to get backstage. It was a pretty weird situation.

Jack White’s show is divided in two parts, the first being his back-up band being all female and the second half his back-up band is all male. While his intention may have been liberal there was something sexist about that concept, but that’s the least of my concerns.

Not only did both bands have to conform to a dress code – Forties vintage pin-up girl dresses for the gals and suits for the guys – but the light and sound techs also had to conform to this stringent Sunday churchgoer look. There was no choice in colors, either, as White mandated that everyone dress in the color blue. This was his witty way of vanquishing the red and whites that his previous persona in The White Stripes had to adhere by on stage. His eccentricity achieved Batman villain proportions when the light gels that hit the stage also had to be the color blue at all times.

This would be fine and dandy if Mr. White (dig the irony) adhered to his own dress code but he didn’t. He was boringly swathed in a black bowling shirt and black slob pants. How much does it suck to be ordered to dress like Napoleon Dynamite with the corduroy suit when the boss doesn’t even follow his own rules? And I thought the bossy Board of Supervisors sucked ass.

By the way, the music was the dirgiest hippie shit I’ve ever heard.

Further proof that people have lost their minds can be found on lamp pole banners strewn across Los Angeles courtesy of the Annenberg Space for Photography, currently exhibiting rock and roll photographs of the past fifty decades, entitled “Who Shot Rock & Roll?”

The banners are ridiculously offensive and tasteless, as images of John Lennon and Kurt Cobain, both handgun fatalities, are posted next to the title, “Who Shot Rock & Roll?”

Would it really pain the Annenberg if they chose non-gun victims like Prince, Bob Marley, Pete Townshend or Janis Joplin, to name a few, next to the sensational title? It would probably sell the show a lot better and prove that art people might be almost as intelligent as they think they are.

It’s always fun to discover a new writer you’ve never read before. In the past few years I’ve discovered John Dos Passos, Sebastien Japrisot, and Joe R. Lansdale, among others. My latest find is Robert Cormier, known for writing “The Chocolate War” but also the author of many other great YA (Young Adult) titles. I recently finished “Tenderness” and “Heroes”, and they’re some of the darkest teen novels ever written. I recommend all of them highly.

I’ve laid off making tops and jeans for now and see myself hovering more towards designing accessories (mostly bags) because they’re quicker to make and quicker to sell, too. Pictured below is a partial shot of the bag sitting in front of my new Kenneth Cole New York Fashion Guide shoes. What a pair of beauties! I may die tomorrow but let me die in style, baby!

By the way, if you are interested in seeing some of my accessories on sale, you can visit the Funny Crow store at Etsy. Here is the link:
FunnyCrow Shop on Etsy
More items will be added in the weeks to come, and yes, I do take requests. 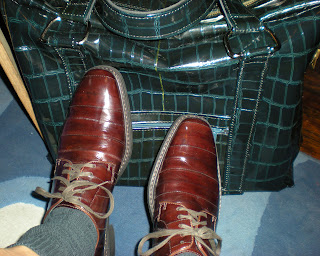 You have an action packed life. I could not stick to a dress code or wear baby blue.. I am done with Rock photography but I love your photo. Nice your shoes and cool bag! Write another story for me to enjoy!