After The Kiss, A Murder 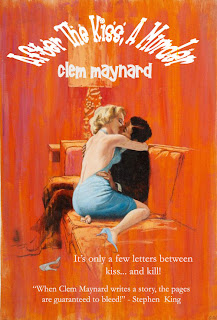 “Kiss me, detective!” she hissed.
I grabbed Jill by the waist and pulled her towards me, her soft, warm body pressed hard against mine. Her lips were hotter than the Sahara, her burning tongue entering my mouth and scorching the cavern-like insides. I could smell her sex, the musky invitation whispering, “Take me tonight!”

“How about that cup of java you promised me?” Jill fetchingly teased.
“The kitchen’s to your right”, I jabbed my thumb to the revolving door. “Heat up the percolator, sweetness, and make it snappy!”
She left the room, her tight yellow shift dress switching away, her brassy red hair tantalizing me like a devil’s crown.
I lit up an unfiltered Chesterfield and walked over to the hi-fi, clicking on my favorite Les Baxter album. Baxter was always guaranteed to bring out the tigress in any woman!

I parked my carcass on the plaid sofa, trying to tame my primitive ardor for the time being. What was I going to tell Chief Connell? What was a private detective doing romancing a murder suspect, albeit one with 38-24-36 measurements?
I weighed all my options while the guilty temptress was in the kitchen brewing that precious joe.

“Everything under control in there, baby?” I called to the closed door. I took another perfunctory drag of my smoke as I heard footsteps stomping down the hall towards my apartment.
BANG BANG BANG! A fist pounded against my door.
“Something tells me that’s not Chicken Delight”, I rakishly chuckled.

BANG CRASH! The door cracked open, giving way to a metal claw. I pulled my Smith & Wesson out of my shoulder holster and aimed at the breaking door because I knew exactly who it was. By the time I reached my deduction he demolished my door and came charging at me.

It was Jeremiah, the murderous Danish seaman who already threatened me the other day at Fisherman’s Wharf. Corpulent and standing at 6’6” tall, the peg-legged psycho with the iron claw glared at me.
“This be the last time you get in my hair, shamus!” His bushy black beard bobbed on his ruddy-complexioned face. “Now you give me what I came for, or I cut you up like skipjack, yah!”

“I told you once and I’ll tell you again, Squarehead, I don’t have your damn golden gizmo!” I pointed my heater at his monstrous Scandinavian demon’s head. “Stay where you are!”
“Yah, I tink not, snooper!” he charged at me. Before I could squeeze a few shots at him he pulled the pistol out of my hand with his claw. The gun flew across the room and smashed into my African Fertility God statue, toppling it over.

“I finish you, yah, like I gut minnow!” His yellow separated teeth gleamed. He picked the lapels of my Brooks Brothers suit with his claw and lifted me up by the throat with his one good hand, choking me. I tried kicking him hard in the groin but all I could hit was his damned wooden leg.

“Hah, Hah. Hah! You squirm like eel, dis goot fun!” He hacked phlegm as he laughed. “For de last time, where is the dingus?”
“Let me down ya big ape and I’ll kick it loose!” I wheezed, losing my breath.
Jeremiah loosened his grip on me and dropped me onto my plush thick piled rug. That bastard - my fall aggaravated an old football injury! I almost hit my head on the tinted glass coffee table.
“Hokay but no funny stuff or I kill!”

I was about to try something clever when the revolving door opened. There stood a thin, shapely man without his red hair and yellow shift dress on, in his underwear holding a gun in one hand and a percolator in the other. Fooled again by a pro! The doll was a dude!
“Okay, boys, reach for the ceiling, nice and slow, both of you!” he yelled.

“Angel”, I froze in shock, “Is that you?”
“You didn’t really think I was a woman, did you? I’m after the golden gizmo just like Olaf over here!”
“But, but, but, I thought we had something real!” I exclaimed in horror.
“Listen, sailor, I’ll do anything to get that golden booger, ANYTHING. Besides, that dress certainly does things to my figure!” he swung his hips. I thought I was going to get sick all over my expensive thick piled rug. Les Baxter played on in the background.

“Ugh, you’re that nelly who hangs around the docks, I know you, I fix you like I fix him!” Jeremiah yelled.
“Don’t make a move! I’m walking out with the dingus, not you, fish!”
“Ach, you fish, not me! I walk out wid dingus, girly boy!”
“Not a chance, butch!”

While these two maniacs argued I quickly grabbed my expensive table lamp and smashed the top half of the bulb, taking the base with its exposed wires and smashed it against the percolator in Miss Jill’s hand. The combination of spilled coffee and live electric wires made Jill go into a seizure. The lights in the apartment flickered like crazy.

“Now you give!” Jeremiah lunged towards me with his thick peg leg.
I stood between him and the former Miss Jill who was still flopping around like a gutted fish. I pushed Jeremiah towards Jill and his hook caught to the handle of the percolator. They twitched in a lover’s clutch of electrocution, both bodies hung together and twitching to their electric death.

I kicked the plug out of the wall and watched as both bodies fell to the floor, very cold, very blue, and very dead.

I walked over to the hi-fi, turned off Les Baxter and turned to the telephone. I picked up the receiver and dialed Chief Connell’s personal hot line.
“Hello, Connell? It’s Goldsmith, yeah, me”, I looked down at the two corpses, sailor and drag queen, clutched together in death. “Buckle up your seat belt, Skipper. I’ve got your killers ready for delivery”.

this is what Griff was reading when he was giving blood. Love it!

And he still had trouble staying awake all through this rugged bachelor pad action. What a paperback!