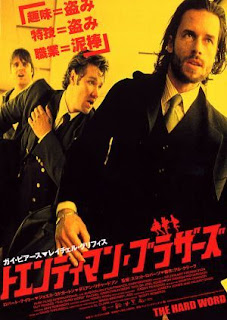 Every once in awhile you see a movie that doesn’t make much sense, completely implausible, BUT…it’s got great actors, likeable characters, snappy dialogue, dazzling cinematography, exciting editing, some of the wildest music this side of an old James Bond movie, and you have to simply sit back and enjoy it, anyway.

“The Hard Word” isn’t a brilliant film but it’s a fun time-waster, a film that almost dares you to like it even though it doesn’t really make a lot of sense. The film starts out showing a trio of Australian bank robbing brothers led by Guy Pearce cooling their heels in penitentiary.

Pearce is a prison librarian, his easy-going brother Mal is the prison butcher, and short-fused brother Shane just lifts weights and cusses a lot. Their defending attorney Frank Malone (Robert Taylor) keeps them in the cooler in between heists he arranges for them (??) while trying to bone Pearce’s wife, Carol (played by Rachel Griffiths) on the side.

Although the idea of prisoners being taken out of the pen to pull a heist is pretty ludicrous the ridiculosity doesn’t end there, because the job they pull is robbing the prize money at the Melbourne Cup, the Australian equivalent to the Kentucky Derby. With the help of two extra thugs, esp. a short-fused psycho named Tarzan, well, if it was so simple for five yobs to hold up the Melbourne Cup it would be done all the time. But so what? It’s only a movie. 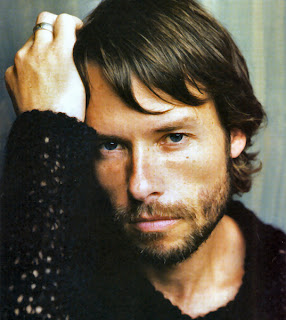 After double-crossing Frank and his two rent-a-thugs (incl. Tarzan) the boys run off with the swag after scamming an innocent, drunken girl in the parking lot who Malcolm falls head over heels over (“You small better than Christmas dinner” gushes the larcenous foodie). On a side note, all three brothers get their rocks off at some point during the film, i.e., Shane gets jiggy with the hot redhead prison psychiatrist.

All through the movie Dale (Pearce) accuses his wife Carol of banging Frank while Frank in turn accuses her of banging anybody in pants, making us wonder all through the film which side she’s on. By the end of the film she has to make the ultimate decision, will it be her husband, dead-end con Dale or smarmy, connected attorney Frank? It’s all up to her.

“The Hard Word” is highly recommended simply because it’s like a quick slug of Red Bull, not necessarily nutritious but so adrenaline charged you can’t resist the ass-kicking rush it gives you. Check it out. 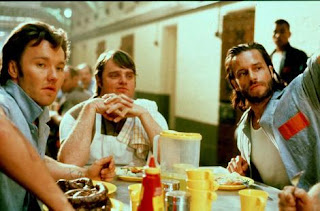 After a mind-numbingly long delay Todd Solondz’s latest film “Dark Horse” has finally seen a release. Now that it’s out the expression “catch the movie" has taken on a new meaning as the film couldn’t sit still to survive a screening.

When I found out it was out I planned on “catching” it at the Westside Pavilion Landmark where it played on Tuesday and Wednesday; however, by Thursday and Friday it was playing at The Nuart Theater in Westwood. Before I could even get to the theater it had been moved to The Chinese Theater (not the big one, but the Chinese 6 Cineplex next door) in Hollywood for Saturday and Sunday. That's three different locations within the course of a week!

By the way, the film stars Selma Blair, Christopher Walken, and Mia Farrow, a pretty heavyweight crew of actors, and again, this is Todd Solondz, the director of “Welcome To The Dollhouse” and “Happiness” we’re talking about. To see a film treated so poorly by distributors and exhibitors answers every question as to why the film industry is failing.