Dogville and "The Resurrection Shuffle" 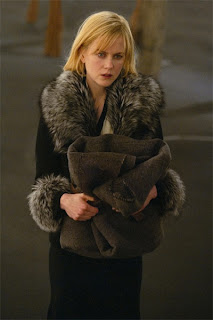 When former computer programmer Anders Breivik went berserk and killed 69 teenagers in a Norwegian Islamic camp, film director Lars Von Trier freaked out. Breivik, a religious fanatic, listed “Dogville” as one of his top three favorite films. Von Trier already had an angry mob of critics and theater goers who thought the movie was strongly anti-American with its images of impoverished Americans during the end credits. But what really freaked him out was not the fact that the film was deemed anti-American, but that Breivik caught on to Von Trier’s real message: in “Dogville” Jesus is back, and he’s pissed.

Staged not so much as a narrative film but more like a passion play, “Dogville” is the story of a woman named Grace and her escape from an overbearing, powerful father, known only as The Boss. She hides in a town called Dogville, where the residents are, by and large, terrified and hateful of strangers, even when they look like Nicole Kidman. Like any passion play, the next three hours chronicles Grace’s trial and suffering at the hands of the awful residents of Dogville (an anagram for Evil God). Grace accepts her abuse and punishment from the residents of Dogville in a passive, virtually Christ-like manner. Towards the end of the film she's shackled to a wheel, recalling the cross Christ carried on his back. The similarities end there, of course, because she’s freed by Her Father's gangsters once they've caught up with her. Her Father, The Boss, demands an explanation in the privacy of his confessional booth-looking limousine and she makes a deal with him. She will take over The Rackets (religion) if she can waste all the townsfolk that degraded and defiled her. The film ends with her exacting her revenge by having the entire town killed. So, this time Jesus gets even, kicking ass and taking names. The ultimate revenge flick, and it's religious, too. “Dogville” presents a vindictive Son of God, which someone sick, like Breivik, could misinterpret as a reaction to non-believers. Christ as Charles Bronson. That’s not to say Von Trier made a dangerous movie, but that a violent film that criticizes religion could send a fundamentalist nut on a killing rampage. Von Trier still makes movies that broach religious subtexts like “Antichrist” and his new release, “Melancholia”, but personally I’d rather watch “The Idiots”, his fusion of Ingmar Bergman and Johnny Knoxville. ______________________________

In the early Seventies hippies moved towards forsaking drugs for a more transcendental lifestyle, namely religion. The born-again Christian movement hit the scene influenced by rock musicals on the order of “Jesus Christ Superstar” and “Godspell”. Even the previously meditating Beatles got into the act with “Let It Be”, ad nauseum, so a backlash was imminently due. Around this time a band of seasoned and jaded rockers called Ashton, Gardner & Dyke released “Resurrection Shuffle”, an insane piss-take on the now trendy Jesus Freak craze. As pop songs go it’s actually pretty solid, sounding a lot like The Jim Jones Revue, who should cover this song ASAP if they had any brains.

Nobody predicted that the most unexpected rockers were so enamored with this wild rocker that covers of this nutty parody proliferated like crazy. Lulu even got into the act. Check her out: Tom Jones had to wrestle his vocal cords in this one, too. I think he acquits himself nicely on this version. By the way, notice how everyone seems to sport a shit-eating grin on their face whenever they cover this crazy number. It thumbs its nose at the God Rock trend of the time. In the long run nothing compares with the version rendered by those nice Mormon boys The Osmonds, adding this brilliant rocker to their “Crazy Horses”–era repertoire. Merry Christmas Everybody! Don’t let your back bone slip!
Posted by Andy 7 at 5:00 AM