James Rosenquist Will Blow Up Your Mind 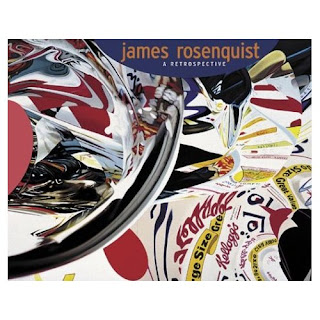 During my lunch break at work I ducked into MOCA (The Museum of Contemporary Art) and browsed around and stumbled into a huge book of works by pop art painter James Rosenquist. I was always aware of his work but took it for granted until I picked up this amazing collection. It was quite a find, published by The Guggenheim Press to coincide with a retrospective of his work at The Guggenheim Museum in New York. Although the book is out of print and fetching $120 on eBay it was on sale at MOCA for only $50. The color reproduction of his paintings are absolutely beautiful, some of the best I’ve seen in any art collection. This amazing collection really sealed my appreciation of Rosenquist’s genius.

Many Pop Artists hit their peak in the Sixties and faded by the late Seventies, some compromising their work (Warhol) or simply being redundant (Lichtenstein, Wesselman), but Rosenquist’s work has a brilliant consistency that continues through the decades and shows no signs of tapering off. His paintings are as edgy in the Eighties and Nineties as they did in the swinging Sixties. 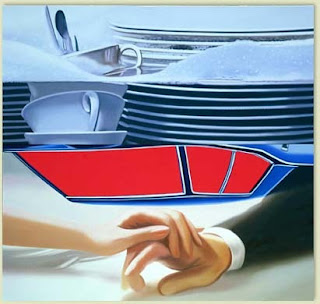 While many have praised Williams Burroughs cut-and-paste writing, Rosenquist has accomplished a graphics counterpart to that concept by merging random images to the same painting. In one piece a pair of lovers hands are held while a pile of dishes sits in an adjoining frame. Advertising and consumerism aren’t so much criticized as they are rendered absurd by their dogpile of images, which divests it with a deadpan sense of humor. In another piece, cosmetics are displayed in one frame, a pile of tires sit in another, topped by a frame of a turkey’s head. That one kills me!

James Rosenquist began his career as a billboard artist and applied his background to painting bigger pieces than many of his pop art colleagues. Some of his best paintings go as wide as 17 feet long, so his work comes off as billboards from some insane fever dream. His love for painting has not diminished as snapshots of him working amply demonstrate: he stands alone in front of a billboard-sized canvas, first sketching his draft and then applying paints from jumbo-sized soda pop cups…and there are no assistants in sight! It’s just him and the jumbo-sized canvas, reminiscent of Alec Guinness as Gulley Jimson in “The Horse’s Mouth” painting one of his insane murals.

I was very saddened to read in Wikipedia that in April 2009 his Florida estate and two studios filled with many of his works burned in a terrible fire. It makes me sick to think that all that amazing artwork is lost forever, hence the importance of huge art books like this so that we can keep them like dead relatives in a scrapbook. Lost or not, James Rosenquist deserves more of your attention because he’s created the best pop art ever produced. 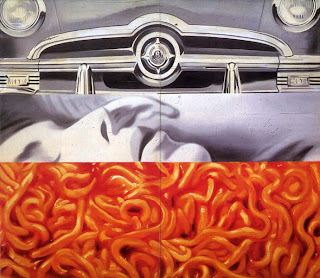 I love this artist. He needs more credit. Tired of cereal boxes and cartoon art getting all the applause.

Some of his beach scenes recall Eric Fischl, thanks for the link.