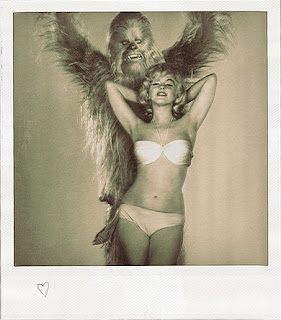 If there’s one thing we can all agree on it’s that Year 2009 has been nothing but surprises, both good and bad. This is the year that supercreep Michael Jackson finally died (25 years too late) and our troops pulled out of Iraq but will probably get shipped over to Iran. The first six months of the past year went a little like this:

January: Got a royalty check from CD Baby for my records for the first time in 32 years in the music “business”. It was a tiny check but at least someone was reputable enough to finally reward me for my hard work.

February: Rebecca was out working at the Grammys so I decided to go to a gay bar in West Hollywood and watch them there. It was good fun, way cooler than watching the Super Bowl in Minnesota.

March: The economy totally crapped out and I’m perpetually getting sick. I guess my vitamins don’t work anymore. I quit Yelp, a website that might have attained popularity of monstrous proportions if they had kept their cutting edge writers instead of bullying them to the point of quitting. The site’s claims of increasing popularity are insanely exaggerated, but speaking of insane, how about the people that made a big noise about quitting the site and then rejoined several months later? Attention whores of the lowest level, say I.

April: The paranoid shithead neighbor who used to key my car on a regular basis got his car totally trashed by an Orthodox Jewish woman who lost control of her big, fat SUV. Divine intervention? You be the judge.

May: Of all the pictures from Gary Baseman’s art show I posted on flick*r the ones with the biggest hits had me in them. I guess Andy trumps art, or Gary, for that matter. On the other hand a video I posted on YouTube from a fashion show I was on had the audio taken off for reasons of “copyright infringement”. What the fuck?

June: Had an alarm system installed in my apartment so all you budding Michael Chapmans out there who want to kill me so you can stop worshiping me, beware. The world has become so insane that I’ve learned to love The Crystal Method, and you’d never catch me listening to their shit in a thousand years, but times are tough. Electronica will save me because no one else will.
Posted by Andy 7 at 9:50 AM

I love this: "supercreep Michael Jackson finally died (25 years too late)." It's been making me crazy how people have been acting like it was Thriller-era MJ who croaked and not the current freaky version. I have actually overheard multiple people say they have been CRYING over it. Ew. My bestie Emily did have a good zinger though. When she found out, she said "children of the world, relax your sphincters."

Amen! Here's hoping the 2nd half of the year turns out better, way better.

I love this. Can't believe the year is zipping by so fast.