The Insane Legacy of Dori Seda 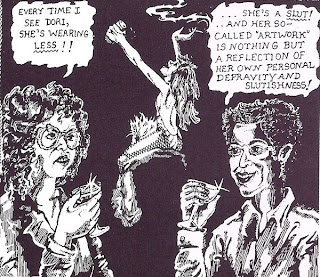 Dori represented everything that was awesome about Frisco femininity. Intelligent, sexually charged, and always funny, a guy didn’t have a chance because it hurts to laugh with a boner. A near complete collection of her wild comics can be obtained in “Dori’s Stories” (Last Gasp Publishing). Her autobiographical tales depict her being a stoned nuisance at a party, dating an obnoxious teen metrosexual, hitting the sex want-ads, a wimmen’s retreat orgy, and lots of drug-fueled swinging. Before I go any further let me explain that these are still done in the classic underground comix style and aren’t a load of cheesy Playboy Magazine “Annie Fannie” romps. You smell more car exhaust and Mission District smog than you do Aramis and VSOP brandy. The humor is paramount to the erotica, anyway, and that’s why these comix rule. 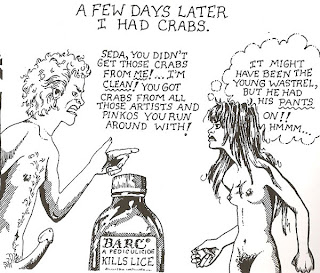 The story that “dogged” her career (forgive the pun) was “Crabs Eating Raoul” about (you guessed it) more swinging. After giving a hypocritical ex the boot the story ends with Sedi in bed kissing her dog, with the line “from this experience I’d discovered the true love of my life”. Seda felt hounded by bestiality accusations after this story and went to great lengths to repeat over and over “I really don’t fuck my dog”, which actually turned into a pretty funny running gag. It didn’t really bother her much because in a later story she’s naked giving her dirty dog Tona a shower, another very funny story.

While Dori was serving up her cool slapstick erotica in the uptight Eighties her personal life was not so charmed. She worked as the cleaning lady at Last Gasp Comics, hoping she could get her foot in the door. She worked up to bookkeeper and got a chance to draw her own comic, “Lonely Nights” for that publisher. While she had the admiration of Weirdo Comics publisher R. Crumb (who published her) she didn’t quite capture the favor of his successor Peter Bagge (who rejected her work). Never bitter, Seda turned to posing for fumettis photographed by “Ghost World” director Terry Zwigoff. Her alter ego in the fumettis was “Sylvia Silicosis”, a disease she suffered from. 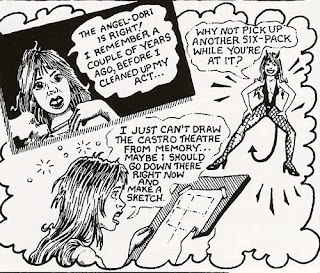 Dori contracted silicosis (aka black lung disease) from fabricating her ceramic sculptures without using a protective oxygen mask. Her constant smoking combined with her disease made her hack and cough constantly, eventually killing her during a debilitating flu epidemic in Northern California in early 1988. The tragedy didn’t end there: Seda’s mother claimed to be the beneficiary to all of her work and refused to allow them to be released for a book-length compilation, reportedly dismissing them as “filth” and “of no entertainment value”. Everybody’s a critic. Fortunately, a will Seda had drawn up for laughs was unearthed by her boyfriend which enabled her work to be enjoyed for years to come. “Dori’s Stories” has been out for ten years and I just discovered it, and damn if it isn’t the most entertaining book I’ve read this year. Just reading Dori’s stories makes me realize how special she and the rest of the girls of San Francisco truly are. 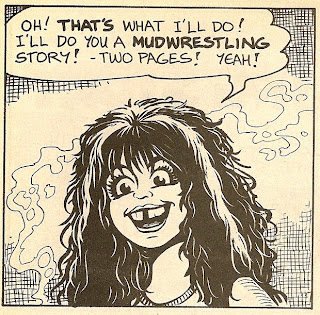 Dori was the greatest. I have read Dori stories so many times. Thank you for writing about her.

Besides her work, I will remember her laugh most. What a wonderful goof. Best. Girl. Ever.

So happy to see someone else showing appreciation for Dori Seda. I discovered her work in 1987 while working at St. Mark's Comics. 26 years later those stories still crack me up!

No doubt about it, Dori still rules.