Did Somebody Mention Patti Smith? 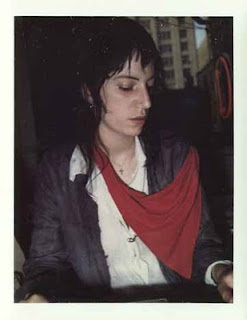 Once upon a time, many great new bands would forego playing auditoriums and instead do three night engagements at The Whiskey A Go-Go, The Roxy Theatre or The Starwood. These engagements would of course be over the weekend, and right around the time Patti Smith’s groundbreaking debut album “Horses” was released she booked a weekend engagement at The Roxy Theatre.

When buying tickets for a weekend engagement this was the rule of thumb: Friday, opening night, was always sold out and so packed that standing in the club was sweaty and uncomfortable. The performance was usually wobbly because the band was feeling out the shit PA and acoustics. It was so funky you never felt like you got your money’s worth. I avoided Fridays, which was easy because they sold out the quickest.

Saturdays were better, the band gaining more confidence with their material and understanding how to work the room. I remember a Saturday at The Whiskey A Go-Go featuring Blondie and her openers, Tom Petty and The Heartbreakers. Both bands were having a lot of fun on stage. I shook Petty’s hand when it mattered(1977).

Sundays were the best. Nobody went out on Sunday night, it was closing night, the bands were fully confident and experimented on stage and interacted with the smaller audience and it was big, big fun. Did I mention that bands always played an early show and a late show? If you went on Sunday night you got to stay and watch the late show for free! I saw Patti Smith on Sunday night.

I had tickets for the late show (12 midnight) and stood in a longish line (Patti was already big because she pulled a bigger line on Sundays than anyone else). As I stood in line waiting for the early birds to leave I saw Peter Falk, Columbo, quietly strolling down Sunset Blvd. with his wife holding hands. They were so dressed down they fit in with everybody on the street, him in uncombed hair, dirty t-shirt and scummy jeans. The wife wore a plain house dress and didn’t give a Hollywood fuck what anybody thought. What a killer couple.

So! Anyway, Patti’s first set finally ended and out filed out the largest conglomeration of tragic lesbians I’ve ever seen: the bulls with their Ziggy Stardust Bowie haircuts in jumpsuits, the stark ‘n skinny folkie Peggy Liptons with no man-forced make-up on, angry debs in leather motorcycle caps, not a smiling dyke in the pack. It was severity on parade. Suzi Quatro was probably jealous as shit.

Patti Smith was not really punk rock but a kind of garage noise band. While Patti would recite her free-form poetry on “Birdland” her guitarist Lenny Kaye would make percussive noises on his guitar. I loved that line she sang in the Velvet Underground cover: “Don’t you know the blackest thing in Harlem is white?”

More Pattisms: “Redondo Beach is a place where women love other women”…”Jesus died for somebody’s sins but not mine”…She kept her between-song patter to a minimum and kept the yackety-yak to performance poetry. Legendary shit. It’s one of those shows you’ll remember even when you’re seventy-five years old.

A year and a half later Patti came back for a spoken word show at The Roxy. By this point she was the toast of the town and this show was a star-studded event, a garage punk version of “It’s A Mad, Mad, Mad, Mad World”. While Patti scatted and recited selections from her books “Witt” and “Seventh Heaven” she was getting support from her band and John Cale, Buddy Miles (!), Iggy Pop, Ray Manzarek, and some guys from The Byrds, etc. The real show was outside: an extremely drunken Arthur Lee from Love was fighting with the bouncers outside and pulled a gun on them, by which point Sheriff’s Deputies were called and Lee ran down glamorous Sunset Blvd. cussing and yelling like Uncle Humphrey at the Easter Sunday BBQ church picnic. Love may have set the scene on the Strip way back when but The Roxy wasn’t having it.

At this point Patti’s head was getting bigger than ever and was given to silly dance moves (eventually breaking her neck at one show from it), even sillier statements to the press, posing as a PLO terrorist in photos and the audience shifted from the Beebo Brinker Knitting Circle to the Gabba Gabba ramones clones and Johnny Rotten wannabes. Our cult of misfit toys no longer had our beatnik cheerleader anymore; she was now the public domain of shopping center punks in suburban Southern California. But it’s cool. To be honest it never really had anything to do with Patti Smith, anyway.
Posted by Andy 7 at 5:35 PM

I love this. Not a fan of Patty but you made me wish I was there.
Thanks