The Day I Blew Yelp.com Out My Ass 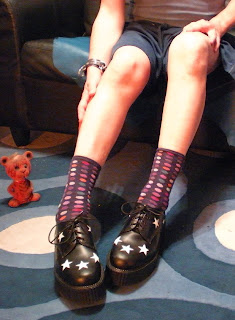 Well it looks like those cutting edge kids at Yelp.com are at it again. Check out this idiotic message:

Hi Andy,
I'm writing to let you know about our decision to remove your photo associated with Palm Springs Desert Museum. Your photo was flagged by the Yelp community, and our Customer Service team has determined that it violates our local business photo guidelines for not being relevant to the business. Please keep Yelp's local photo guidelines in mind when you participate in the future.
Regards,
Edgar, Yelp User Support
San Francisco, California

The photo that was pulled was a Roy Lichtenstein piece that was on exhibit at the museum. I was baffled by their remarks since it didn’t violate anything, but far more offensive was the reprimand at the end of the message, “Please keep photo guidelines when you participate in the future”. Thanks for the slap on the wrists, you fucking dingbat. I’ve posted 195 photos on the website. You can shove your reprimands up your ass, Edgar.

One month later I got another message from Yelp, this time my review got taken down. Wanna see the message? Here it is:

Hi Andy,
I'm writing to let you know about our decision to remove your review of Screen Actors Guild. Your review was flagged by the Yelp community, and our Customer Service team has determined that it falls outside our review guidelines because it appears as though you were an employee of the business you reviewed. Your reviews should be unbiased and objective. If there's any hint of a conflict, please don't post the review.
As a valued member of our community, we hope you will continue to provide great reviews, while keeping in mind our Review Guidelines. See you on Yelp!
Regards,
Cecilia, Yelp User Support
San Francisco, California

The Offending Review:
I remember temping here eons ago when they were on Hollywood Boulevard 3 blocks east of La Brea (now a Scientology center). The first thing I saw when I arrived there were the Landers sisters (Audrey & Judy) with their mom. I guess they needed their maw to help them pick up their residual check. Whoa. I worked in the residual section data entering checks. I remember keying in Jack Nicholson $5,000 Marlon Brando $3,500 Larry Fortner $25,000. WHAT??? "Hey, who's Larry Fortner?" "I don't know. Look at the pay stub". I looked down at the pay stub and typed in was: "Tales from The Darkside (Voice Work)". Apparently "Tales From The Darkside" at the time was being aired globally four times a day, so the guy that spoke during the opening and closing bumpers was making more money than Jack Nicholson and Marlon Brando combined. The moral of the story: You can be cool and make artistically enriching films for a living or you can talk on TV and make a KILLER living. The temp assignment only lasted six months, and then I worked in the mail room at Tiger Beat Magazine, but that's another story.

“An employee of the business I reviewed?” Did you not read the opening line? “TEMPING EONS AGO…” meaning I don’t work there anymore. Cecilia, you airhead, brush up on your reading comprehension skills, I said I worked there years ago. The bizarre irony is that the review neither promoted nor attacked the Guild, but merely made the observation that voice-over actors stand to make tons of bread. How does that compromise anything about the business?

When I first joined Yelp.com it was mostly inhabited by forty-somethings with names like “Smivey” who debated on the message board about which wine went well with French cooking. Three years later the site is populated with Christina Aguilera fans who delegate taco truck runs into Unofficial Yelp Events. The age demographic went from yuppie to puppy, and no matter how you sliced it you either felt too young or too old to even get involved in the cliquey festivities. Yelp reminds me of the finale to “2001: A Space Odyssey” when Keir Dullea travels so quickly through light years in the galaxy he turns into a super-embryo floating in space. In the case of Yelp, the chateaubriand bistro has turned into a taco truck!

In the ten years I’ve used the internet I have never experienced a website so anxious to punish and destroy their members’ work with so much police state zeal. Even YouTube and Flick*r have more liberal posting policies than these assholes. While we’re on the topic of integrity, take a minute away from my blog, go to Google Search and type in “YELP EXTORTION”. How many matches have you found? Thirty? Forty? Even the San Francisco Chronicle has Yelp bent over a barrel for being a bunch of dirty little rats. Where’s your guidelines now, Yelp.com? Feng-shui your extortion, Yelp.com.
Posted by Andy 7 at 5:37 AM

Well they better be COMPLIMENTARY Pinkberry reviews or there'll be Hell to pay!

I was never a Yelp fan. I only read your reviews because I love the way you write.
You can write about anything and I will be there.
Don't let this unplesant juvenile, sugar sucking, fat slobbering website bring you down.

You writing for Yelp is like hanging dingle balls in a Mercedes.

HA! Awesome post, Andy! But you know how much I hate those fuckers. As much as I loved the concept and writing reviews, I just can't fucking stand a website where they froze my account for a week because I defriended princess Stephy. Also, did you know Joan was the one who was trolling Masa that whole time?! Fucking tragically hilarious. My business used to show up first in our search category. After I refused for the millionth time to advertise with them (which costs $300 A MONTH btw), it now comes in 3rd or so, and they removed one of our positive reviews.

No thanks! There's a pretty massive walk-out from everybody. Oh well, at least it spawned a great blog-site from you (FITC).