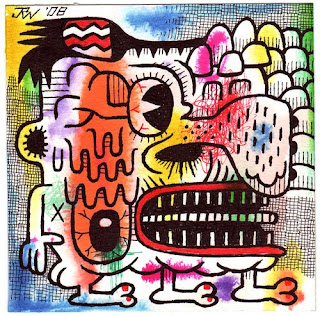 Two struggling rockers lived together in Hollywood until they heard about this new hipster hot spot called Silver Lake, which they promptly moved to lickety split. They rented a house up the hill from Spaceland, and shit doggy, they had it made, well almost. They were in their late thirties going on forty and knew they were going to catch on like wildfire in the local music scene. They knew nothing of the new bands that were popular, but as long as they pulled out their old Neil Young and Velvet Underground albums they were safe.

There was Kim, who refused to eat meat for "political" reasons. He came from Chicago, where not eating meat was pretty rebellious. He dyed a blue streak down his chestnut brown hair, strong stuff that. He also chain smoked, drank his weight in beer and avoided using deodorant. He wrote songs that were political if you read "between the lines". Kim believed in going green, which was why he never washed his Buick Riviera. It stank of umpteen spilled coffees.
Steve was his roommate. After losing his girlfriend to a paralegal he started wearing dresses on stage after seeing Falling James wearing one on the cover of Flipside Magazine. His band was called Bag Of Ice and had songs about drugs, only he never took drugs in his life. He was scared of them! What a pair.

Steve and Kim worked at the same office every day. In between business calls, Kim turned to Steve and said, "You know, dude, people in the hood don't know about our cool sounds. Let's throw a party and invite all of the coolest scenesters we know".
Steve stammered because he was out of drag and it made him nervous. "Whoa, Th-th-th-at's an awesome idea. We can look up all the coolest people in Flipside Magazine!"
"Yeah! Bitchen! Let's get a copy of the latest Flipside!" Kim slammed down his coffee mug.
"I heard if you invite the staff of the zine they'll party with you and give you a big write-up."
"Awesome!"
Their boss walked by and barked, "C'mon, break time's over. You're on the clock, guys".
They picked up their phones and made separate calls. Kim dialed and spoke, "Hello, this is Mister Richards. Am I speaking to a Mister Dwayne Franklin? Mr. Franklin, you have an outstanding credit card debt of $5,500. You have a choice of making a lump sum payment at a lower rate or you can pay the full amount in installments. What would be more convenient for you? Hello? Mister Franklin?"
Steve spoke into his phone. "Hello? Is this the Martinez residence? Hello, honey, is your daddy home? Do you know what time he comes home? No, that's okay, I'll call back at 7:30 PM".
With their cold calls finished, Kim grunted, "It's gonna be a tough one. I'm gonna need a refill!" He hoisted up his stained cup of coffee.

About a week later after many cold calls to the Flipside Magazine staff and to every scenester photographed in the latest issue, Steve and Kim got the party started.
Kim, with cigarette in mouth, proudly announced, "Safeway had a sale on Gallo Port and Vernor's Ginger Ale. We're gonna have some bangin' punch!"
Steve beamed. "Sweet!"
Steve had some party recipes of his own: he took some Jiffy Pop popcorn kernels and threw them in a stained paper bag and stapled it shut and then threw it into the microwave oven, setting it past the 3-minute mark.
Steve picked up the ringing phone. "What?" Steve's eyes bugged out in excitement. "A Gun Club tribute band wants to play an acoustic set in our backyard? Yeah, dog, invite 'em over".
After 90 seconds of buttery goodness wafting in the air smoke began emanating out of the microwave. Kim noticed the smoke pouring out, and freaked. "Steve! STEVE! STEVE!!! Get off the phone, man!"
Kim ran over with a Rite-Aid fire extinguisher and doused the little oven with it.

Ten minutes later, after airing out smoke with all the windows and doors left open, Kim asked, "Dude, what kind of records do we have?"
"Well, I have a Japanese pop band record and a CD by that all-girl band from Nebraska who hate men. That oughta cover things".
"Awesome. What happened to my Pansy Division record?"
"Your brother stole it after he came out."
"Oh yeah. I'll have to give him a call. I'll pretend to be Mister Richards, heh heh".
"That's the way, dude".

Later that night the party was going and the Port and Vernor's was a-flowing. After numerous urns were thrown up in by various Flipside staffers and scenesters riffled through their medicine cabinet, the big Gun Club tribute band went into their acoustic set. During the middle of their passionate rendition of "For The Love of Ivy" the police showed up and broke up the party. Everyone was resigned to the party being over and 90% of them left. Kim was fit to be tied.
"This is a fascist police state, damn it!" he yelled in his best stern bill collector baritone, cigarette dangling from his lips and a loyal bottle of Fat Tire in his right hand. A cop was ready to rush him but the party left-overs held Kim back and shushed him down.

Kim, still fortified by his drunken rebel reverie decided to provoke a healthy political debate with someone, anyone. He planted himself in front of a Japanese girl and a mole-like Flipsider. They were busy discussing the club scene in Silver Lake.
"I think people who eat meat are no different than the Nazis who ran the concentration camps!" he blurted out at them, defiantly staring them down.
"What?" the girl asked.
"Am I right or am I right? You're from Japan, aren't you? Did you know that Kobe beef is from Japan? Kobe has done more to ruin the meat packing industry in America than any other country!" He puffed his smoke at her like a mad bull.
"Um, yeah, okay", she groaned and got up to walk away.
"Great party, huh?" Kim asked the Flipside mole.
"Yeah", the geek writer mooned, "we gotta go out sometime and get bent, bro".
They high fived each other and a bromance was a brewin'.
"My dress is killing me", Steve twitched nervously, obviously too big for a Miss Sixty original.

The next morning, both hung over, aspirins and coffees by their telephones, they looked at each other, and moaned.
"Fuck, was that a p-p-p-party or what?"
"Killer, Steve. Flipside's promised to come to our next gig if we put them on the guest list."
"Sweet, dude. They're gonna write a review of my s-s-single once I get it pressed."
"That party - shit, that was the best investment we ever made, you know?"
"Yeah. I think somebody from a Polish fanzine was there last night."
"Bullshit!" Kim looked incredulous.
Their boss walked by and barked, "C'mon, break time's over. You're on the clock, guys".
They picked up their phones and made separate calls. Kim dialed and spoke, "Good morning, this is Mister Richards. Am I speaking to a Mister Dwayne Franklin?"
Steve spoke into his phone. "Hello? Is this the Martinez residence? Hello, honey, is your daddy home?"
Surely, success was waiting in the wings.
Posted by Andy 7 at 6:25 AM

This is why I shudder at the thought of ever moving to Los Angeles! I thought Northern California Gilman Street Maximum Rock and Roll dweebs were the worst - until now.